On Tuesday, I went to another meeting of the German Meetup group. We had coffee at a Starbucks and best piece of information of the evening was: I was told about a German butcher shop where I can get “Bauchfleisch” (pork belly). Oh, if you could see me drooling right now.

I know, I shouldn’t be talking about pork while everyone and their brothers is worrying about the swine flu. But just to clear up the confusion: eating pork does not give you the swine flu, ok? (Neither does reading the word “pork” or “swine flu” on my blog. I checked.)

So, I’ve been inquiring for a while, if – and if yes, where – I would be able to get fresh pork belly. The pork selection in the supermarket is astoundingly sparse, to say the least. The only pork meat I’ve seen in supermarkets are pork roasts, pork chops, pork ribs and smoked pork chops (rarely, though). Bacon is made from pork belly, but for some reason you can’t get it uncured or unsmoked.
But hands down, fresh pork belly is THE best meat for BBQs.

Tomorrow J and I are planning to see Susi and her J for a BBQ and I am determined to make a stop at the German butcher shop and see if I can pick up some fresh pork belly before we go. That would be the highlight of my weekend: first BBQ this year AND pork belly :)

And now, I will stop talking about it. Saying it over and over somehow makes it sound “gross”.

Oh my freakin’ god, did you guys see the Boston Red Sox’s Jacoby Ellsbury’s home steal in the game against the Yankees last night?? A.M.A.Z.I.N.G.

Ok, now, after you let out your collective sighs (because I know some of you think that watching baseball is the most boring thing in the world), I need to tell you: I’m thrilled, it’s Baseball Season!!

I don’t know how many of you know, but I played softball in a team myself for many years back in Germany (oh yes, we do have competitive baseball and softball leagues there – in case you didn’t know) and I miss it.  It’s a much more complicated and strenuous sport than some of you might think. We practised twice a week and had games practically every weekend during the summer months. It was a real commitment, but it was so much fun!!

I played many different positions – catcher, 3rd base, left field, but my favorite position was “catcher”. I guess, part of the fun was the whole protective gear that you got to wear (I was a little paranoid about getting hit in the face by the ball) and I also loved the “blocking”, throwing myself in the dirt ;) Hitting was fun, too. One year I got a “trophy” for being the 1998 batting champion *woohoo*.

I really wish I could still play (and before you suggest joining a “hobby softball team” here in the US – I hardly believe that this would be the same).

Watching baseball just makes me tingle and I am always looking forward to the start of the official baseball season. J and I are “Boston Rex Sox” fans, naturally. I was lucky enough to be able to go to a game at Fenway Park once when I was in Boston a couple of years ago. 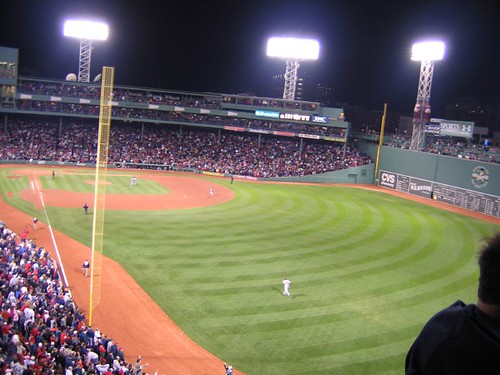 Even though I actually prefer to watch the games on TV (it’s much easier to follow), I will admit that the atmosphere at the baseball park is just amazing!

So, we watched Baseball all last weekend, and the Red Sox swept the New York Yankees in a three-game set which was just so pleasant to see, especially as they came back big time a couple of times after trailing behind in runs. Every time J was about to give up on them, I told him “juuust wait” and they came back with some amazing RBI-hits and clever base-running.

How can that NOT get you on your feet!?

J and I had tickets for Jeff Dunham’s show “Spark of Insanity” on Thursday night. OMG! It was absolutely hilarious.
It is unbelievably hard to get tickets for his shows. They sell out pretty quickly and I got lucky last fall when I found out that his tickets would go on sale a couple of days later. I logged onto Ticketmaster at 10 a.m. sharp on that day, just to find out that all tickets for the first 20 rows were already gone. WTH?

I still got floor seat tickets which – if the show takes place in a sports arena – is pretty good. You don’t want to sit all the way up in the blocks just below the ceiling. Arco Arena is an especially steep arena which does not make a good venue for stage performances, if you ask me, but oh well. 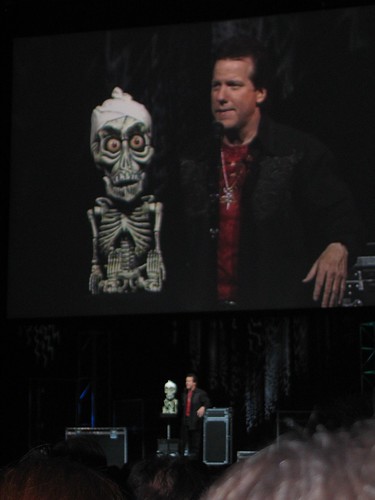 The show itself was absolutely fantastic. Jeff Dunham is a ventriloquist and a genius. The way he argues with himself through his puppets is brilliant. I haven’t laughed that much in a long time! Do you know that feeling when you actually have to start rubbing your cheeks because the laughter is becoming too much to bear? THAT’s what it felt like.

If you don’t know Jeff Dunham, you have to check him out on youtube.com. I promise, you won’t regret it.

You know, understanding comedy in a foreign language is real hard. It’s not only about the language barrier that needs to be overcome with time, but also about “common knowledge”.
I never realized how much people are influenced and shaped by the environment they grow up in. Comedy makes use of that environment constantly and so it’s not surprising that by the time I had pretty much overcome the language barrier, I was still going “huh?” in obvious despair half of the time, because I still didn’t get the jokes. I got every single word that came out of the comedians’ mouths, but I could not for the life of me make sense of it or even find it funny.
Until I realized: it has nothing to do with language, but all to do with culture and environment.

Daily life is often the basis on which comedians built their shows and funnily enough, even if it doesn’t seem so different superficially, daily life in different countries/cultures is VERY different.
Comedians make connections or refer to people/events/situations that you might have NO idea of if you grew up somewhere else. It’s literally impossible to even catch up on all the references that are made in comedy.
I mean, for crying out loud, do you (Germans) know how many jokes had to be “changed” or completely omitted by dubbing the Simpsons? It’s virtually impossible to dub comedy.
Of course, there are generic jokes that will work in every language, but most of the best and subtle jokes will only work and be understood, if you grew up within the same culture from which the jokes originated.

With time (and J’s tireless patience to explain) I have come to understand, I would say about 90% of foreign comedy. Some of it isn’t even funny after J explained it to me, but I at least understand the connection that was made.
In return, J will never fully appreciate and understand “Loriot“- my favorite German Comedian (who will turn, oh only, 86 this year) – which makes me a tiny bit sad, but that obviously comes with the different cultural backgrounds of bi-national relationships.

On the other hand, there are a lot of good things that we “get” from having different cultural backgrounds. I guess in the end, we get the best of both worlds ;)