With all of the things going on right now as mentioned in the protected post, I don’t think I’ll be able to treat myself to a new toy quite yet.

I am a little bummed, but sometimes good little things happen when you least expect them.

I had mentioned before that my small beloved point-and-shoot camera has been a little unpredicitable lately. Sometimes it would work, sometimes it wouldn’t. I couldn’t quite figure out why and the error message on the screen didn’t turn out to be helpful either.

After realizing that I probably wouldn’t be able to buy the DSLR for a while, I thought I would at least find out if my small camera could be fixed. It only seemed to be some kind of minor “mechanical problem” that prevented the lense occasionally from opening up or retracting. A little shaking of the camera usually did the trick.
I went to ‘Best Buy’, where I bought the camera about 3 years ago, and asked if they provided ‘camera service’ and they did.
The man asked if the camera was still under warranty, which I doubted, and if it was covered under a service plan, of which I had no idea.
After looking up our name and product number in the computer system, he happilyÂ told me that we had purchased a 4-year-service-plan for the camera, which would be valid until January 12, 2009, and that therefore all repairs and cleaning of the camera were F R E EÂ :)

Well my friends, how awesome is that??

So I left my camera right there with the man and returned home to give J a BIG hug and kiss.
He was startled and frankly irritated by my sudden affection, until I told him that I totally loved him for having insisted on buying the 4-year-service-plan for the camera [for only $69!] back in 2005. He’s just great like that andÂ  it reallyÂ comes inÂ quite handyÂ right now! :)

I haven’t really had the time to participate in Kristine’s SPF since she revived it a couple of weeks ago, but today I thought I would participate, just because the theme fitted so well with one of my recent purchases [for our new place-to-be].

You really can’t have enough kitchen towels [not that I really buy them that often, but…]. And aren’t those pretty? 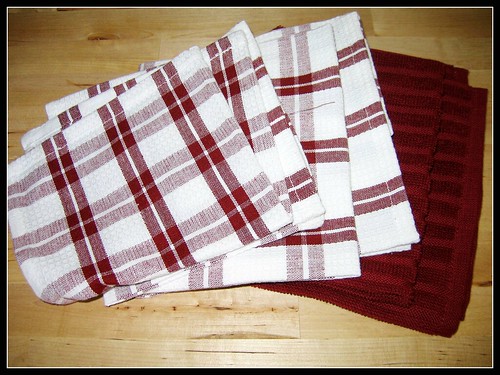 On Tuesday night, I met with Claudia and Stoyan again, as well as another old acquaintance from back when we lived in Davis. Scott used to be our neighbor at your first Davis apartment and he had also been a member of our bookclub for a while.
I hadn’t seen, talked or emailed with him in ages and when Claudia told me back in February that she was still in contact with him [since they were both attending the same online class at San Jose State University], she suggested to get together sometime. I thought it was a fabulous idea.
Said and done.

We first met at Scott’s place and after a quick chat walked to a Mexican restaurant for some yummy dinner. It was really nice to catch up after such a long time.
The funny thing is, now that I am up here, everybody seems to be moving away. I really have bad timing with people.
My friend Ilka [from my hometown in Germany] returned to Germany, shortly after I had started my job here last fall. Claudia and Stoyan will be moving to Denmark in about a month, because Stoyan applied for a postdoc-position and was accepted and Scott is planning to move to Chicago this summer.
It really is too bad. It was kind of nice to think that there were a few acquaintances close by to hang out with occasionally.
I guess we’re back to the “How to make new friends” – game.

Anyone good at that game?

Do you remember how I was rubbing in last week that the thermometer had reached almost 90Â°F [=30Â°C] for the first time this year? Yeah, well, turns out that was just a little taste of summer.

Admittedly, it is still April and we’re back to the mid-60’s where we should be. And I actually like it that way. I took a long, hot bubble bath last weekend – which might just as well have been the last time before a most likely long and hot summer – so I’d better enjoy it when I can. Right now, it even looks like rain when I look out. I had to get out my fleece-jacket to go to work this morning.

My gym class killed me last night. Figuratively speaking, of course, since you can very well see that I am here to type this entry. It’s weird, even though I know it’s going to hurt a little a lot the next day, I do look forward to the workout every Monday… the one day that I have totally committed to workoutwise, even though I am hoping and trying to go at least two more timesÂ per week.
I really do enjoy the satisfying, nevertheless tired, feelingÂ when the class ends, rightÂ before theÂ best part of the 1,5-hour-workout: stretching. The music gets all quiet and everybody gets into a relaxed state of mind. I feel sweaty, exhausted, but really good. AbsolutelyÂ great and rewarding feeling.

Come on, don’t tell meÂ that doesn’t makeÂ you want to go to the gym :)

I walked into the Java City Coffeeshop in my work building this morning, when I smelled something that took me right back to where I was 15 years ago.

I was staying in Boston, attending a 4-weeks language summerÂ class in Medford, at Tufts University to be precise, and the smell today reminded me of what the cafeteria smelled like where we used to have breakfast every morning.
Damn. I hadn’t thought about this place in ages.
It’s funny how a smell can bring back deep buried memories and refresh them like you just experienced them yesterday.

Those four weeks were one of the best times of my life and it was also the time when I fell completely in love with Boston. [Now you know!]
I had a fantastic time there. I was only 17, it was my first big adventure away from home and I was so happy there.
A year before, I had just gone through the whole process of applying for a Highschool year in the US with an agency, the dread of a written test and interview, only to decline the opportunity when I received my acceptance into the program :( [yeah, stupid me, but I guess, I was not “ready” to go at that time].
One year later, I was ready to go and the four weeks in Boston validated my gut-feeling that this would be a life changing experience for me.

Here I am, 15 years later, married to an American and living in California.

Wow, this all just hit me… and all because of a ‘stupid’ smell at the Coffeeshop downstairs!

If someone could explain Facebook to me, I would really appreciate it. I am a little overwhelmed and frankly confused by all the hugging, gift-giving, drink-giving, quizz-requesting and such.
I usually only check my Facebook siteÂ if I get an email saying that I had a new message [or to play Scrabulous :)], but last weekend I noticed that I had 187 requests/notifications that I wasn’t even aware of! WTF!
Are you guys on top of your requests and notifications? Please tell me you’re not or you’ll make me feel really really bad. Who the hell has time for this?

To be honest, I find the site poorly organized and have a hard time finding my way around. I am not even sure that I like it.
Does anyone else feel that way?

I got my first pedicure ever (!) on Saturday. How can someone go without a pedicure for 32 years of their lives, you might ask?
Well, a) you must have grown up in Germany [because pedicures for teenagers and young women are definitely a pretty new invention over there – or am I wrong?] and b) you must have been too tight on money for too long to go “waste” it on a footbath and massage, followed by nail-clipping and coloring done by someone else but yourself. But it is, I have to say, quite the treat.
I couldn’t stop starring at my pretty french-polished feet [in sandals!] afterwards :) |

The rest of the weekend was not AS exciting as last weekend, but we still had a relaxing time.
We went out for breakfast yesterday. Breakfast in an overall pretty “liberally inclined” place. At the end of our breakfast, the waiter brought the check and also two jelly beans. He asked as to ‘cast our votes’ for Barack Obama or Hillary Clinton at the door. McCain wasn’t even in the race there *ha!* There were two glass vases and many people before us had ‘cast their votes’ with jelly beans. It was kind of funny… because there were only blue, red and white ones. Would you have expected anything different?! ;)
The two vases were kind of equally filled with those colored jelly beans. Damn, I should have taken a picture. Where’s your camera when you need it, right?
We dropped in our “votes” and I left wondering “who do you think is going to make the nomination?”.

Oh, and did I mention: I already received my federal tax refund! It’s kind of convenient to do your taxes before the due date… before the IRS people are swamped with last-minute returns and won’t get to yours in a timely manner :)