My Mom is at the hospital and had surgery yesterday. It drives me crazy to be here so far away in LA and not being able to visit her right now. I was able to shortly talk to her this morning and I know she’s doing quite well under the prevailing circumstances. I don’t need to worry, but I hate the fact that I can’t be there for her right now.

It’s strange, because this is not the first time I have lived away so far from home, but right now the distance seems overwhelmingly far… this, of course, could be due to the fact that a) more than 6000 miles are indeed … uhm, let’s face it… FAR, b) nobody was having surgery the last time I lived in CA, and c) after spending almost a whole year back in Germany, I had gotten used to being so close to my family again. I do admit that is kind of a contradiction, too, that a “family person” like me can physically be apart from her family for extended periods of time. Doesn’t quite fit, but I am trying.

everybody is talking about the Oscars… and the Annual Academy Award Celebration is just around the corner from here :) I am tempted to go. Then again, I am not. I like to watch the Oscars from the comfort of my couch. But one of these days, I’ll go and check out the red carpet ;)

You probably must be thinking that I am CRAZY for living so close to Hollywood and not going to check it out, but honestly, the hype about the Oscars is a little bit too much for me and there is currently nobody for whom I would wait around for hours. Maybe next time ;) Between us, I like to look at the outfits and it’s much easier to do so on the TV screen!

Last Monday, we went to an “Open Mic” in Hollywood at the well-known “Rainbow Room”. J and Aaron have played there before and this time I was able to go with them. It was a pretty small room upstairs of the Rainbow Bar and Grill and there was a tiny bar to the left and a lowered stage to the right. We arrived a little early and sat down at a table close to the stage. Sign ups for bands and comedians were at 7:30 p.m. and the “Open Mic” started at 8 p.m.

I know I owe you an update.
The last week has been kind of crazy. Not ‘crazy’ like in “so many crazy things have happened”, but in ‘crazy’ like “I didn’t manage to update my blog” ;)

On Tuesday, I received my new hard drive in the mail and I spent quite some time on installing the new hard drive and trying to get my laptop back in shape. Unfortunately, I bumped into more problems with reinstalling some of the software applications [I had to reorder some installation CDs from DELL] and then I was dealing with some problems with my Norton AntiVirus Software.

If you are one of the people that HATE Norton and you feel the urge to tell me now to get rid off this software anyways – save your breath, I already received that advice in my beloved computer forum. I am just not ready to give it up quite yet, because I paid for another annual subscription last August, which gives me another supposedly 6 months of professional Antivirus Protection. So we’ll see what Symantec has to say.

On Wednesday, we had agreed to give some friends of J’s parents a ‘tour’ of LA [in one day – yeah, right!].

The selfish, they’re all standing in line
Faithing and hoping to buy themselves time
Me, I figure as each breath goes by
I only own my mind

And the feeling, it gets left behind
All the innocence lost at one time
Significant, behind the eyes
There’s no need to hide,
We’re safe tonight

And the meaning, it gets left behind
All the innocents lost at one time
Significant, behind the eyes
There’s no need to hide,
We’re safe tonight

And the feelings that get left behind
All the innocence broken with lies
Significance, between the lines
(We may need to hide) 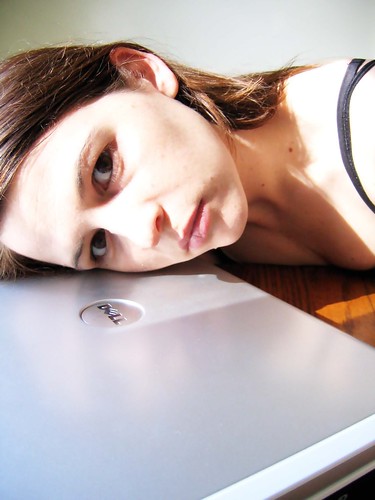 I think it’s seriously messed up and I contacted DELL about a new hard drive.
I am still under warranty [thank God!] and for once, they’ve been quick and helpful with their support… they’ll send me a new hard drive within 1-2 business days for no charge.

So, let’s start fresh… and hopefully I will have an ‘almost’ completely new laptop this coming week ;) Thanks for bearing with me.

Friday was laundry day and in the afternoon, I worked on my laptop. Well, what a waste of time considering that it broke down again last night.Ã‚Â  Funnily enough, this morning the laptop booted up normally. Don’t ask me how this was possible, but it seems like it has a mind of its own. Anyway, I think I’ll be much better of with a replacement. I really don’t want to deal with another crash in a couple of weeks.

Yesterday was a beautiful day. Sunny, not too warm, and I decided to get into my workout habit again. So I went for a run on Campus. It’s really convenient to have the Campus close by and to not have to run on the streets.
I went grocery shopping afterwards and then in the evening Aaron came over to watch a movie. We watched “Merry Christmas“. Very good movie. I recommend it. 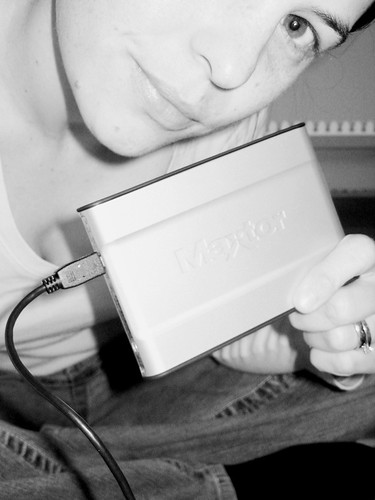 Yeah, I am so excited. I received my external hard drive in the mail today. Pretty slick, huh? I hope that this will be the solution to all my problems with my notebook.

I dedicated pretty much my whole day to my notebook. It was pretty easy to back up the whole c: drive of my computer on this little buddy and then I wiped out my hard drive and started reformatting. Yes, I’ll pretty much have a brand new ‘baby’. I felt kind of hesitant doing that, because I hope I will still be able to put all my files back and have everything working like before, but in the end, I think it was a good thing and a warning for me to back up and take better care of my system! Thank god I didn’t lose any data.
I really recommend to all of you, back up your data NOW!
It’s a P.I.T.A. to deal with a crashed system, but it’s even more annoying if you lose valuable data during this process.

Not much new otherwise. Temperatures are down to 64Ã‚Â°F and I am wearing long pants again ;) so much for the summery temperatures. 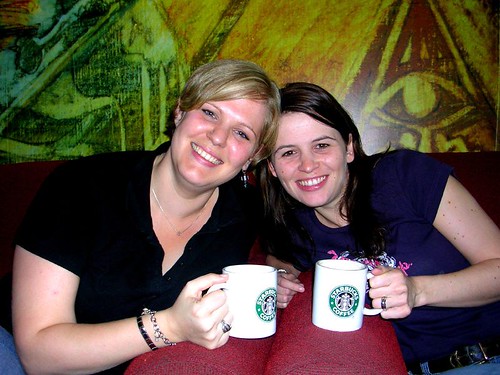 The photo was taken the last time we saw each other in Germany back in October. I wanted to create a special photo with frame and embellishments for you, but since my notebook is not ‘available’ right now – this photo is all I could come up with.

You know I would love to go for some Starbucks with you right now ;)

Thanks for being such a wonderful friend and for all your support in the last couple of months. It’s always good to talk to someone who ‘understands’ and it feels good that our relationship is mutual in this regard ;)

I had a good weekend. On Saturday I went on a massive shopping tour all by myself. I went grocery shopping – which I personally think is fun, but I’ve known people *wink* who don’t enjoy that at all!- and then I went to IKEA.

Have I mentioned before that I LOVE IKEA?

I could go there every weekend! Well, this time we did have some urgent purchases to make. We desperately needed a clock for our living room and a window drape for our bathroom, but as always you end up buying more at IKEA than you have to.

I just love strolling through the exhibition rooms and being inspired by some new home accessories :) I bought a very nice picture for our living room and a bed set that matches the one that I brought from Germany – both was marked down, no better opportunity to buy stuff than when it is on sale ;)

We spent a relaxing Saturday night at home watching X-files and eating pasta with meatballs [according to J, the best pasta that you can find anywhere ;)].

Sunday was Superbowl Sunday. The weather couldn’t have been better [at least here in LA ;) in Florida it was raining pouring the whole game!].
Jon and I were up at 8 am already. I got to talk to my sister and my parents in the morning, then we went for a nice walk. It was about 73Ã‚Â°F [= 24Ã‚Â°C] and we could walk around in shorts and flip flops :)
We got back in time to see the kick off at 3.25 p.m.

J was so nice to explain the basic football rules to me again before the game, because otherwise I would have been totally lost. The complete rules are far too complicated, if you ask me, but as long as I know who to cheer for in certain situations, all is good :) It was a good game and although we kind of cheered for the Chicago Bears, the Indianapolis Colts had earned the victory in the end.

People get crazy for the Superbowl. There were a ton of parties going on on our street and during half time, people were playing catch on the street. I wish we could have BBQed, because of the nice weather and because we could smell the BBQ from some place else, but we enjoyed our pizza just as much ;)

22: Currently in November
.
Link in bio.

View on Instagram |
5/5
We use cookies to ensure that we give you the best experience on our website. If you continue to use this site we will assume that you are happy with it.Ok