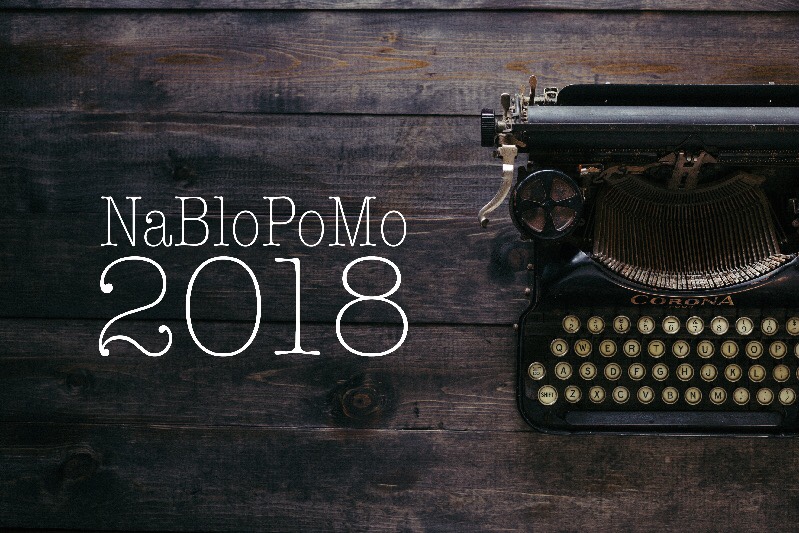 And just like that, November – and NaBloPoMo – is over again. I did surprisingly well (except for the few days when my blog URL was hijacked) and I hope you had fun participating as well.

If you followed along every single day, kudos to you for sticking by me. Here’s a little recap of what was going on in my world this month, if you missed a couple of my posts and would like to check them out.

Tomorrow is the first day of the last month of 2018 (WHAT?) and we’re wrapping up yet another year very soon.  Thanks for sticking around this month, and as always thanks for reading and commenting.

Oh, and don’t forget to sign up for my holiday card exchange if you haven’t already!! 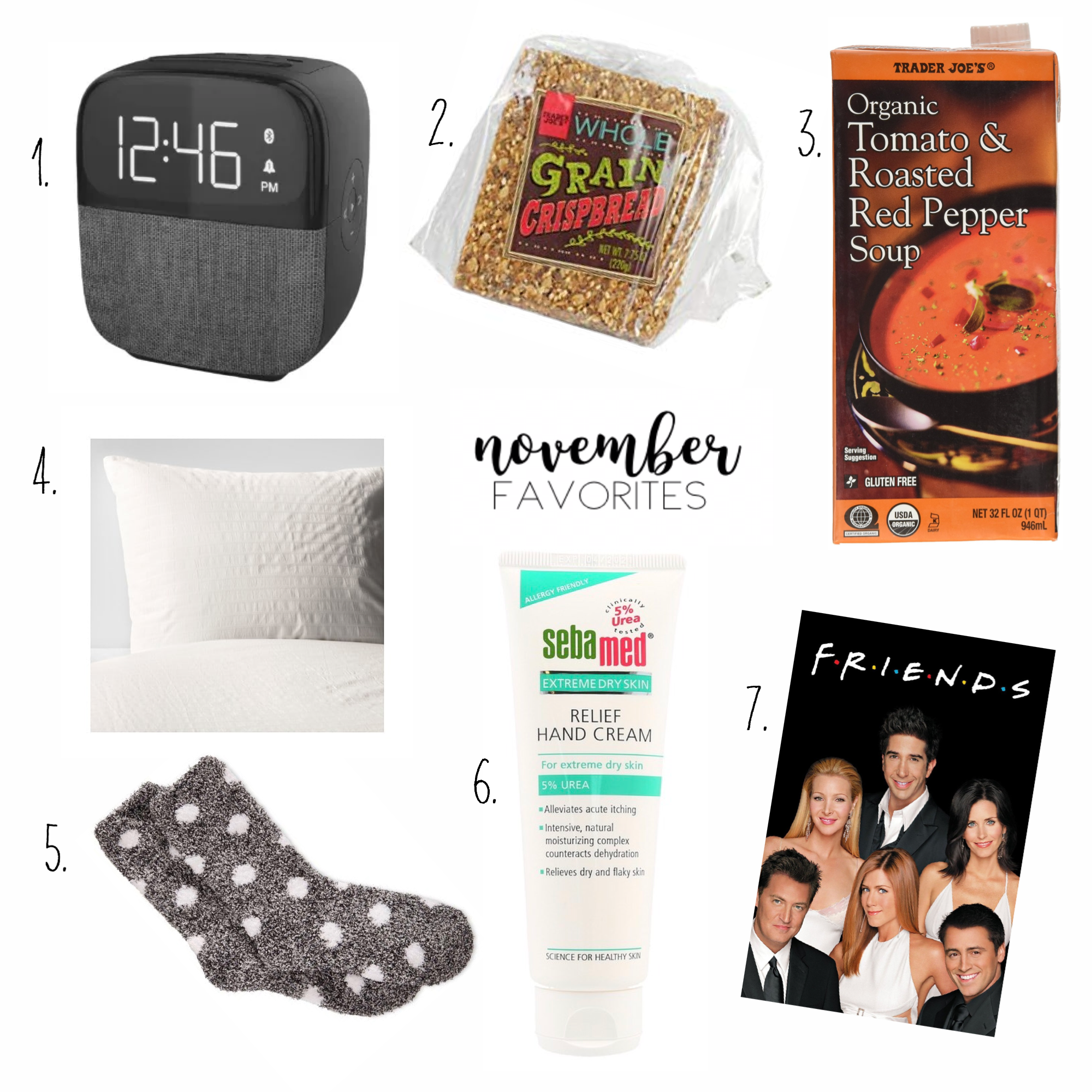 1. Do people still have alarm clocks? When we moved, we threw out Jon’s old alarm clock which he had since college. It didn’t really work anymore and we just kept it because I liked having a clock in the bedroom. I’ve been using my phone for my wake up alarm for years, but then we got this cute Capello Clock Radio* (because I actually like being able to see the time when I wake up at night without having to get up and look at my phone) and I kinda dig being woken up by the radio, the old-school way.

2. I’ve just rediscovered this Whole Grain Crispbread* at Trader Joe’s. I had bought it before but then kinda forgot about it, but was reminded about it this month. It is really tasty.

3. I’ve been on a bit of a soup-kick lately (who am I kidding? I am always on a soup-kick) and I love Trader Joe’s Tomato Red Pepper Soup*. The red pepper gives it an extra dimension of flavor. Add some croutons on top and your lunch is good to go.

4. I bought these Ikea bed sheets* a little while ago and I L O V E them. I know, it’s ridiculous to be excited about bedsheets, but they feel so cozy.

5. Fuzzy socks. Rain and wind are here and I need something to keep my feet warm between now and March.

6. My hands have been rather dry lately and Sebamed Handcreme* is the best hand creme, hands down. I usually bring a few tubes from Germany when I visit, because it’s less expensive over there, but you can buy it here, too. I highly recommend it.

7. It should be no news to you that I love watching re-runs of Friends* and Thanksgiving was the perfect day to binge-watch (which I usually never do). It was glorious.

What was one of your favorite things this month?

* #notanad, This is not a sponsored post. I have not been compensated by the brand or anyone else for linking the websites. 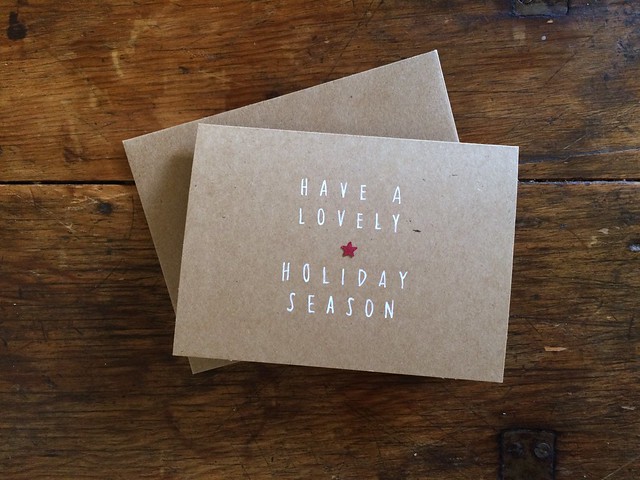 Who is ready for the holiday season? NOT ME!

I mean, I am always ready for it in general (I love the holidays!), but I am so not prepared this time around.

But there is no use complaining, Christmas will be here in about 4 weeks, if we’re ready or not.

So I’ll better get organized and you know what that means: I need to get my holiday address list in order. It’s time for my annual roll call.

If you have been a long time reader of my blog, you know that every year for the last – oh, gazillion – years, I have gathered the addresses of my readers, so I can send you a little note in the mail for the holidays. It’s just a little gesture to give back to each and every one of you lovely people.

All you have to do is sign up here.*

If you have received cards from me in previous years, I’d kindly ask you to fill out the form anyway, so I can keep better track of any address changes.

I am also not opposed to receiving holiday cards myself, ahem, so if you’re also sending out cards and would like to reciprocate, let me know and I’ll send you my new address as well.

I hope you’ll have a lovely holiday season!

We had a nice and cozy first Thanksgiving. We were still living out of boxes for the most part, but I worked on setting up our bedroom and kitchen, so that we could enjoy our first Thanksgiving meal in our new home.

We took a break from unpacking on Thursday, slept in a little, enjoyed our first cup of coffee in the morning and then I started preparing our little feast around 1 p.m.

We traditionally make a hen, not a turkey,  if it’s only the two of us. It’s plenty of food and we still have leftovers. As sides, we decided on gnocchi (small potato dumplings), red cabbage, green beans and delicious mushroom stuffing and gravy this year.

I set up and decorated our table a little bit in the afternoon. 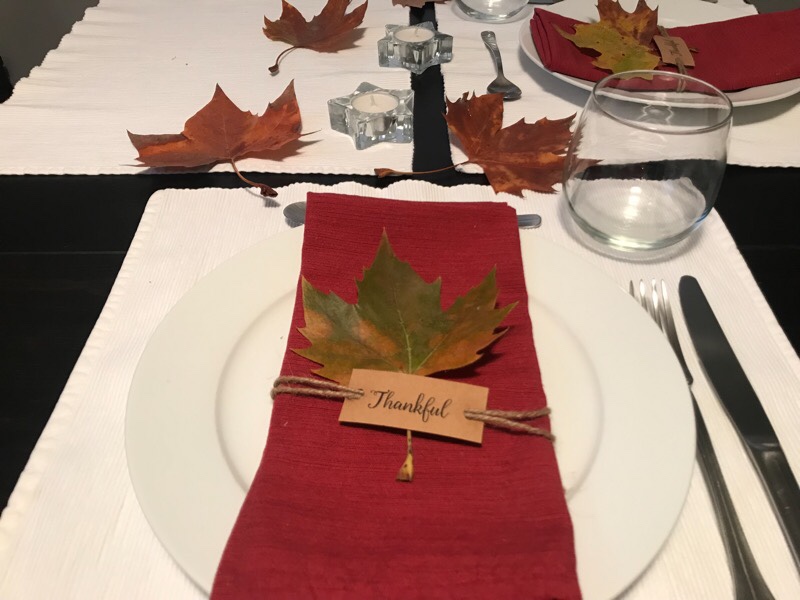 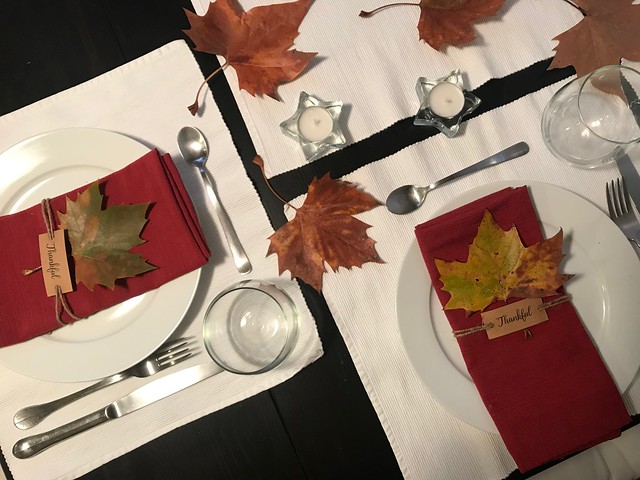 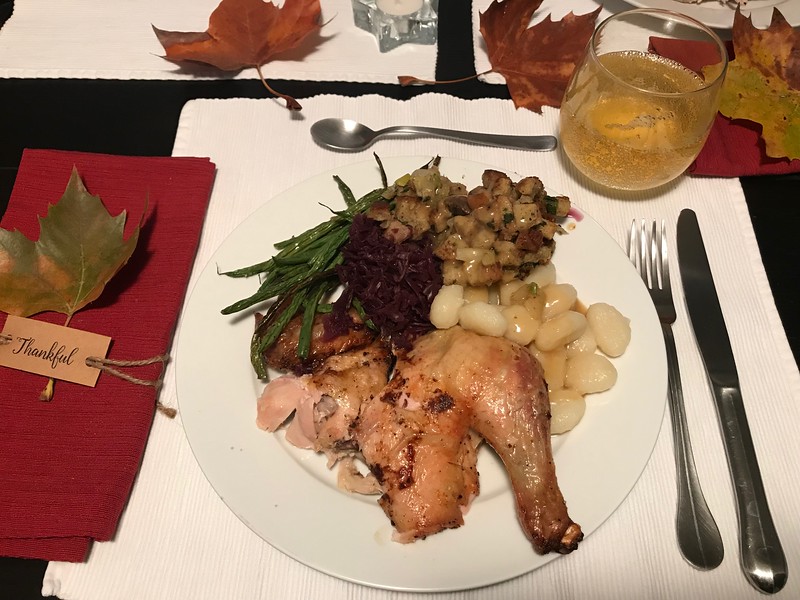 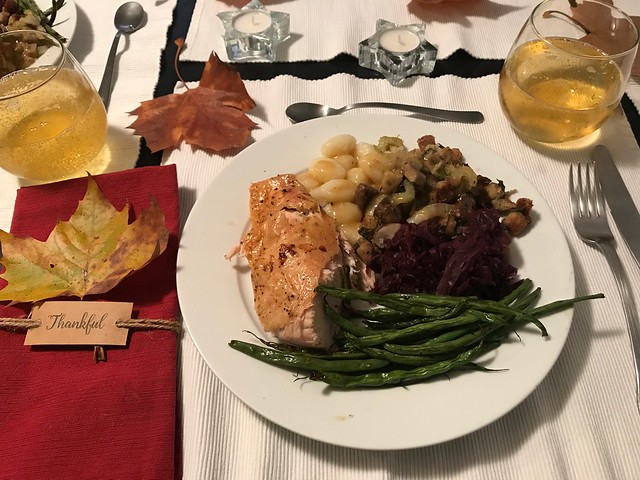 I watched reruns of Friends in the afternoon, drank copious amounts of tea and than later we had some apple blossoms with vanilla ice-cream for dessert. 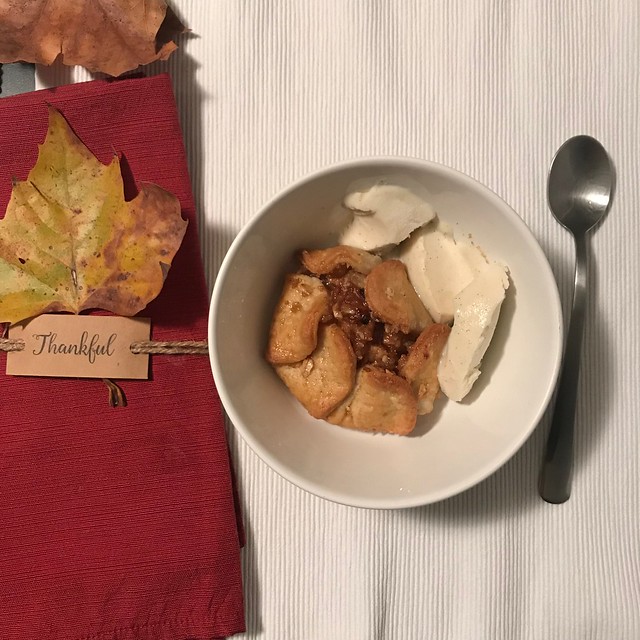 I did not do any Black Friday shopping at all. I usually only shop for things that I would usually buy anyway or get started on my Christmas list, but my mindset wasn’t there yet. I have a feeling I’ll be a little late with my Christmas preparations this year. Have you gotten started already?

The rest of the weekend was busy with unpacking boxes, purging more stuff (who knew that some people – me apparently! – purge before AND after moving?),  getting some stuff out of a temporary storage locker and erasing the signs of our recent move as soon as possible. I can’t stand living out of boxes any longer than absolutely necessary.

I am not saying that there isn’t more to do (we have to hang up photos and artwork for example), but at least, everything is put away for the most part.

On Sunday we took advantage of the glorious fall weather and went for a long walk. We’re back to blue skies and colorful fall foliage here in Northern California and for that, I am so thankful. 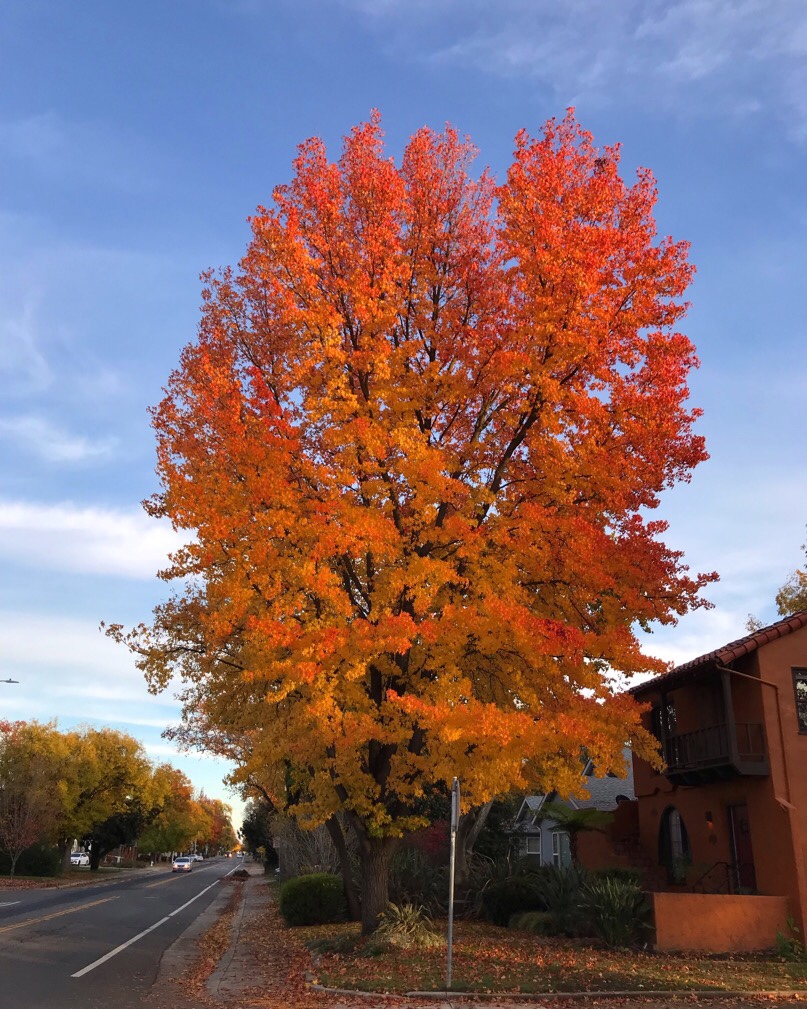 How was your Thanksgiving? Did you travel or stay home? 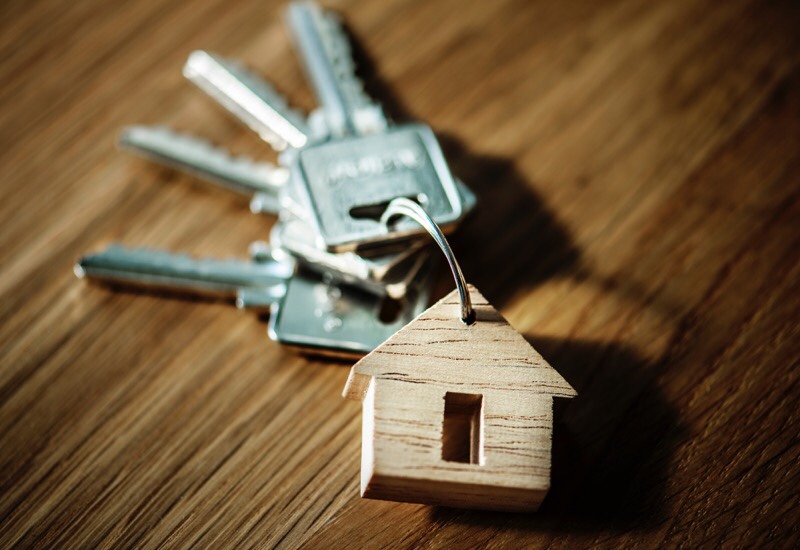 A week ago, J and I moved. We are no longer homeowners.

I know, this announcement just came out of left field for you guys. In all honesty, I didn’t feel like discussing it and I also didn’t want to “blog through the process”. I had mixed feelings about the decision and I just didn’t feel like sharing the whys and hows while going through it. Because you know, people have opinions. So many opinions. I just didn’t want to deal with it.

Fact is, almost 3 years to the day when we closed Escrow to buy the house, we signed the documents to release it to a new owner.

Am I sad? Yes. Make no mistake, I loved our house (and THAT KITCHEN!), and there was still so much I wanted to do with this place. I guess that is the plight of homeownership. You’re never finished, and now we won’t ever be.

Do I feel good about the decision? Also yes. We’ve gone months and months hemming and hawing (mostly me) and weighing the pros and cons and our options, but in the end, this seemed to be the best decision for us.

Are we moving out of town? Am I switching jobs? No and no. Everything stays the same for now. Living in that house was a wonderful and exciting experience in some ways, but in other ways, it was also harder than we thought. Owning a home is a huge responsibility – emotionally and financially – and we just felt that it wasn’t quite right for us (at this time at least).

We’re now busy settling into a duplex in a great neighborhood, closer to my work. It’s been a blessing to find the place and I’ll share more about it when I had the mental capacity to process everything that has been going on the last few weeks. The home (buying and) selling process is so incredibly fast in this country that you barely have time to wrap your head around what’s happening.

I just thought it was time to let you all know, with the holidays approaching and all.