Kristine asked us for this week’s SPF to make a tribute to someone. 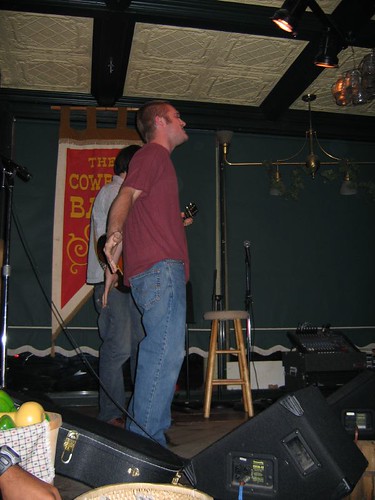 My tribute goes to my hubby.
This is him at his best, singing at one of the “Open Mic Nights” in LA.
Back then, everything was still right with his world.

I dedicate this SPF to him, because he has so much love and passion for music and because he is such a talented musician with a beautiful voice.
He has dedicated his life to bringing back “Rock and Roll” and I really hope that he’ll find a way to live his dream.

This might be kind of lengthy. It was a four-day weekend for me, after all :) Don’t you love it?

On Friday, I needed to recuperate from the long work week. I slept in and took another two-hour nap in the afternoon. What the hell is wrong with me? :)
We ordered pizza for dinner. Can you say… L A Z Y?

Saturday and Sunday we did what every good American does on a Holiday weekend – when he’s not traveling because of the soaring gas prices -, we went shopping.
We had somewhat anticipated the weekend to become a shopping weekend, because Memorial Weekend = coupons = sales = good time to shop for necessary things. Like skin care and hair care products :)

J had given me a generous gift certificate for “L’Occitane” for my birthday and I still hadn’t used it. It was about time. I was a little hesitant at first, because it’s a small exceptional and exclusive little store, but after I had gotten over the pricy labels on all the wonderful products, it was no problem to quickly fill my shopping basket. They have really awesome products. My personal favorite right now:

It smells sooo good and leaves your skin beautifully smooth and soft. You can use it instead of a moisturizing body lotion after your shower.
I also got some hair and skin products and let’s just say – the gift card didn’t quite cut it :) 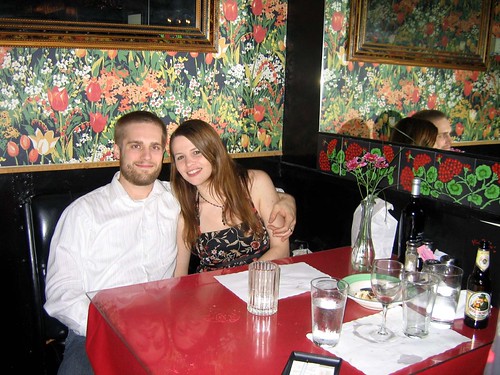 This picture was taken exactly one year ago. Happy times, dinner at Mio Babbo’s in Westwood :)
I can’t believe it’s been another year! Our 2nd anniversary – well, technically, it’s our 3rd! 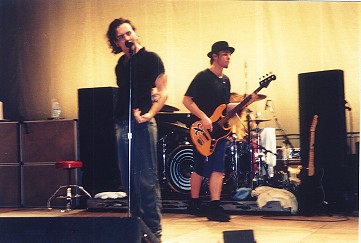 Obviously, I am not in this picture, but I took it in 1996. There were no digital cameras back then [or maybe there were, but I didn’t own one] and I took this picture with a simple, disposable Quick Snap Camera. I am awfully proud of it, because despite the circumstances, it turned out really well. As you can see I made it quite close to the stage.

This was one of the best concerts I’ve ever been to [and believe me, I’ve been to many].

You’ll never guess what I did on Monday.

My co-worker and I bought a commuter sticker. I found out that I can ride the bus to campus for $10/semester with my Campus ID card. The bus leaves one block from my house, drops me off on the opposite site of Campus and I’ll have to walk about 15 minutes across to my office. Awesome! I totally want to do that [at least half of the time]…. and I feel so non-American right now.

While everybody is bitching about the soaring gas prices, I keep thinking to myself…. gas is cheap, people. Have you been to Europe lately?

And still. Taking public transportation does not seem to be an option for most people. I have to say that I feel quite lucky to live in one of the few American cities where the public transportation system is somewhat decent. There is a light rail net and a relatively good bus system.
Did I mention that I took the bus to the airport a couple of weeks ago for the fare of only $1.50?
I really don’t mind using public transportation, in fact, I enjoy it and it feels like the right thing to do. Public transportation is what I used to get to and home from College back in the days and I never really owned my own car in Germany [except for a couple of years when I shared a car with my sister].

They do have to improve the bus schedules though: To get to work somewhat on time, I have to catch the very first bus in the morning which leaves at 6:40 a.m. and gets me to work about 20 minutes later than I usually start, but that’s fine. No big deal. The problem is: If I work late, which I usually do, I have to leave at exactly 6 p.m., because – you can probably guess it – the last bus back to downtown runs at 6:20 p.m. LAST bus of the day. After that, it’s walking or hitch-hiking.

I mean, this is ridiculous. Seriously. 6:20 p.m.? How many students leave Campus by that time? How many employees might work later than that?
So why not have the bus run later?

Oh yeah, that’s right. I forgot. The majority of people are still using their cars. That’s why. I am so stupid.

For this week’s SPF Kristine asked us to post a picture that goes with a lyric in a song. 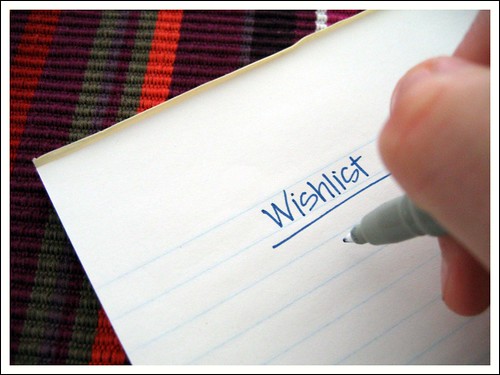 I haven’t started to write my wishlist yet, but I know it would be fairly long these days with everything that is going on in the world…

But I say, there can be. Just look at that: 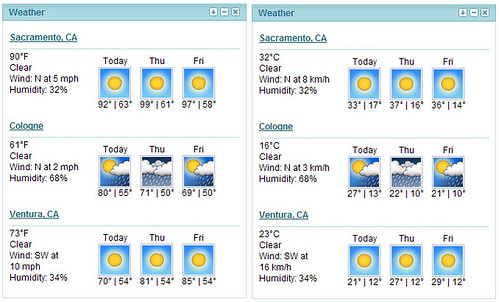 I know. Sacramento lies in the Central Valley and it gets hot in the summer. Real hot. I am aware of that. But this week is crazy. It’s not even summer yet!

Everything up to 85Â°F is manageable. I can handle that. But almost 100Â°F in the middle of May? Seriously – this is WAY out there. Those are temperatures for July/August – not May. We’re supposed to adjust to the heat slowly. If we have 100Â°F in May, how hot will it be in July?

The weather has been really roller-coaster-like lately. I definitely won’t complain about a nice 70-75Â°F-summer night where you can sit outside and chat away, but it has to cool down at some point before the next morning. Everything else is insane. Especially when it’s only May. [/rant]

You get my drift. Going back to Southern California sounds like a really good idea right now. A nice steady 73Â°F/23Â°C would be just fabulous.

I know there are many more important things going on in the world to bitch and moan about right now, but this would honestly be way too depressing. We’ve been following the news about the cyclone in Myanmar and the China earthquake quite a bit at the office [naturally] and all I can say is: I am equally fascinated by nature’s forces as well as petrified by all the destruction and loss of lives. The numbers are just incomprehensible. Someone is really angry. It feels like Mother Earth is carrying out a natural mission against overpopulating or something.