… only that it is Wednesday and I am three days late, but oh well… I figured, you still like to learn some randomÂ things about me, right? :)Â I stole this from Caity, btw.

What is your favorite sit-down restaurant? Mimi’s CafÃ©

What food could you eat every day for two weeks and not get sick of? Bread and cheese

What are your pizza toppings of choice? mushrooms and tuna

What do you like to put on your toast? black current jelly 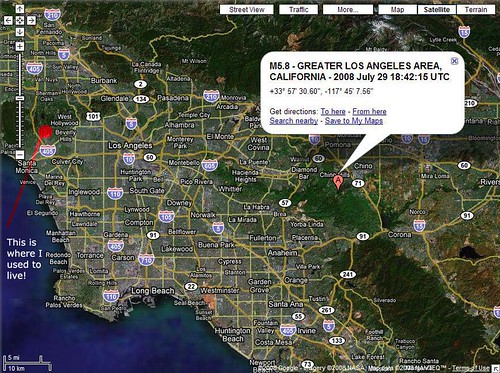 You could even feel it in Ventura!

Meeting new people is always fanastic. Meeting people that you feel you KNOW already, although you have not met in person before, is in 99,9% of all cases even better! It’s like meeting old friends, only that they’re not and you’re, in fact, meeting for the first time! :)
Confusing, eh?

Like I said in one of my previous posts: I had not intended to go to BlogHer. at. all. I wasn’t even registered when I ended up going (although I did receive a

Â pin at the hotel reception at check-in).

I did not really care about women bloggers (though, now I do!) and I did not see any purpose in going to a conference for blogging. I mean, isn’t that something that most people just do for fun? (unless you’re a journalist or business blogger or something) What’s the conference for then? It sounds so important, so business-like.

Apparently, I wasn’t all wrong. I think most of the people who came to the conference where there for the fun, the hanging out, the networking, the meeting of e-familiar and new, non-familiar people.

In retrospect, I wish I had signed up for the whole weekend, not just barely 24 hours. But I didn’t know. If I may quote Jenny: “I canâ€™t explain it – you just had to be there”.
If you know me, than you know about me that I really can’t stand large crowds of women. Can’t. stand. them.
I can barely handle 5 girls in the same room.
But for some reason, I didn’t mind the ridiculous numbers of women that we constantly bumped into in the lobby of the hotel, the elevator, around Union Square, all proudly displaying their “BlogHer badge”. I just didn’t let it bother me, because there was spirit in the air and in the end, it was just important that I got to hang out with some really awesome ladies (especially since girl-time had been a little bit too overdue for me).

Hey, I even ran into Sarah, one of my flickr-contacts.

It turned out that I was a little unprepared for the event, because people had business cards, moo-cards and the like and where handing them out left and right. Nobody had told me that I have to “hand out” anything, besides my cordial greeting, but to my relief, I learned quickly that first-timers always make that mistake.

So, next time, I’ll be prepared. Maybe. If by that time I am willing to just randomly hand out my URL. We’ll see about that ;) 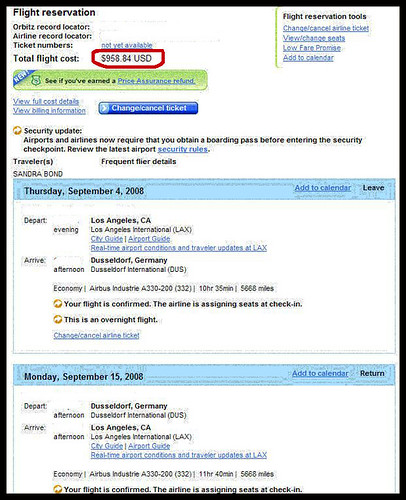 That was the cheapestÂ flightÂ I could find… but,Â whatever.
I’ll be going home. Yay!

Most of you have probably heard of the BlogHerÂ Conference that is going to take place in San Francisco this coming weekend.
I had no intent ofÂ going, because a) the conference is way to expensive for my budget right now, b) I didn’t know of anyone who was part of this whole “women bloggers thing” and c) I am not really promoting my blog like most of the other women who go there. I don’t keep my blog private per se, as you know, but I still don’t feel comfortable advertising it on the WWW.
It might be a little bit of an illusion to think that people can’t find my blog, just because they won’t be directly linked to it, when you search for me on Google, but I still like to keep it a little bit more “secluded”.

Anyways, despite all of this, I am heading to San Francisco this weekend to finally meet two very nice girls that have been part of my blogroll for quite a while: Kerri and Jenny. Yay! When I heard that they were coming to San Francisco, there was no way I would NOT go and say “hello”.
I am staying at BlogHer Headquarters for a night with Jenny, but I will (still!) not be attending the conference and I’ll have to see if I can sneak in for the Cocktail Party on Friday night, because I didn’t get a ticket for it as I didn’t know if I was really going until afterÂ they hadÂ closed the registration.
Hence, thisÂ button…

because I will end up roaming the streets of San Francisco in my cute shoes, if they don’t let me in.

But who knows, maybe I’ll still bump into some more bloggers that I know,Â which would be awesome!, although I seriously doubt it.
Most of you girls, live/blog from too far away and I would probably know if you were heading my way this weekend [or I would be pissed if you hadn’t let me know about it, unless, you were planning to surprise me big time and in that case I would bend the rules and be totally Ã¼ber-excited [and now I am secretly hoping that someone has been planning this big surprise.Â  SeeÂ  how I can totally talk myself intoÂ excitement and anticipationÂ ]! ;)

Have a great weekend everyone… and for weekend updates, you should probably check out Jenny’s blog, because she’ll be blogging from there for sure ;)

As you know,Â  vacation days in the US are scarce.

It’s the middle of July and I have not taken one single day off this year.
Granted, I mostly have three-day-weekends and that is really nice, but a) I’ve still been working 40+ hours per week and b) I have worked 52 hours overtime so far. I really think I deserve a week off to go home and visit my sister and her babybelly :)

I finally managed to ask my boss for the go-ahead to take a week off, but the catch is:

Flights are incredibly expensive right now.
I cant believe that I am looking at flights that are almost twice as much as what I paid for my flight back home last Christmas! It’s insane… and really unfair.
I know some of you feel the same way. Here we are, thousands of miles away from our families and flights are becoming more and more unaffordable. Is it too much to ask to be able to go home to our families at least once a year without paying a fortune?

Considering that I am also planning to go back to Germany with J for Christmas, I really have to be smart about this. I am not willing to pay over $1000 per flight [yeah, but who’s asking me, right?!].

If you have any suggestions for travel websites or come across a good deal – please pass it on! Thanks!

I went to see the SATC movie last weekend.

I was really indecisive if I wanted to see it with J or without him. HeÂ sat through numerous SATC episodes with me and while I think he overall enjoyed to watch it, heÂ always wasÂ very critical about the four women, especially Charlotte. Not that I didn’t find her little bitÂ annoying at times, he!, but still…
However, since I have no girlfriend here to go to the movies with, I let him go with me.Â How nice of meÂ :)Â He was one of two guys in the whole theater though. Go figure!

So, in regards to the movie…

… absolutely LOVED it. Can you say “AWESOME” with me?

It was all I wished and hoped for.Â Â Ok, the Carrie/Mr Big marriage part not so much – I always magically envisioned Carrie to end up with Aiden, but I kind ofÂ knew that it wasn’t going to happen.Â Oh well, a girl can dream, right?!

But overall the movie was fantastic… dramatic… emotional… entertaining.
I know, in a strange way it feels likeÂ we know these women, right?! It really didn’t feel like 2 hours, 15 minutes and for me the “girls-night” (plus 1)Â could have lasted … well, the whole night.

The only sad thing is that “this was it”. No more SATC.
I guess I have to start at Season 1 all over again :)