On Friday, J and I went to the premiere of “Pirates of the Caribbean – at World’s End”. I LOVE the trilogy.
We had been waiting for the third movie to come out for a long time. It was awesome. I really liked it. Johnny Depp aka Captain Jack Sparrow is just outstanding!
Here’s one little piece of advice, in case you want to go and see it… sit through the credits at the end.
Most people left the movie theater as soon as the credits started, but many times it is worth it to sit through them. You’ll understand why.

Here’s a picture of a billboard advertisement in Hollywood. I think it’s so cool. 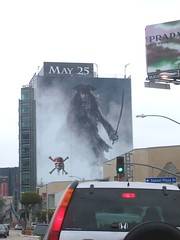 Then Ute -who I have known for 4 or 5 years now- came to visit Los Angeles with Justin and her Mom. We HAD to meet up :)

They arrived on Saturday morning and were staying at a hotel in Hollywood. We met up around 5 p.m. at our apartment. We gave them a little tour of our place [really, literally a “little” tour, because it’s a small apartment ;)] and we talked for a while. It didn’t feel like our first meeting at all – something that I have experienced with many of the girls that I’ve got to know through the Internet and finally met in person :) we were totally comfortable around each other.

We then decided to go down to Santa Monica. Unfortunately, we came a little to late to see the sunset at the beach, but we walked on the Santa Monica Pier and then had some drinks at Mariasol Cocina Mexicana. 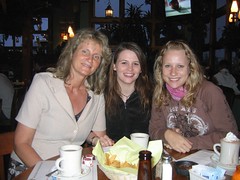 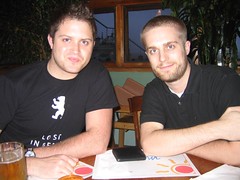 We had a great time talking and eating chips and salsa and the “girls” had coffee and the “guys” had beer ;)

We walked on the beach for a little bit and then got some take-out Thai food for a late dinner at our place.

On Sunday, it was our 1st anniversary and J and I had planned to go out to dinner.

We went to a really cute, little Italian restaurant in Westwood [Mio Babbo’s Italian Ristorante] and had a nice long dinner. We started out with some appetizers [Antipasti platter and shrimp] and then I had “Lobster Ravioli with spinach and mushrooms” and J had “Spaghetti with meatballs”. For dessert, we tried the “Tiramisu” [which was maybe a little too cold, but very delicious].
During dinner we opened our little “box of treasures” – the box with little notes that our guest had written on our wedding day and that we hadn’t been allowed to read for a whole year. Man, it was hard to wait that long, but it was worth it. J and I were equally moved by the sweet and heartfelt messages. 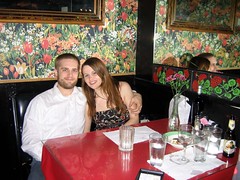 Monday morning, we met Ute, Justin and Ute’s Mom for breakfast in Hollywood, before they had to leave for the airport again. Damn, the time was just too short. 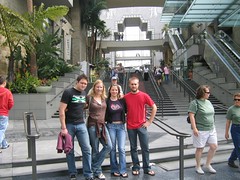 We’re about to go out to dinner.

This weekend was/is awesome. I’ll tell you all tomorrow.

For now, just a memory from a year ago… 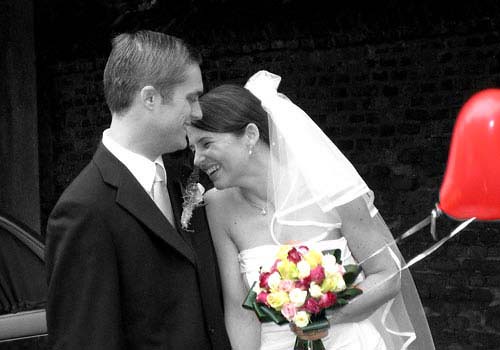 Kristine asked us to post something “little and pink”. 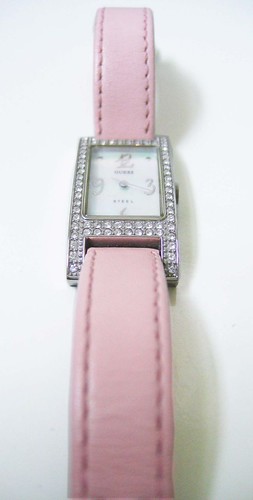 This is the only little and pink thing I could think of. J gave me this watch as a gift a while ago. I love it.

I had a fabulous weekend. What I did? NOTHING :)

Well, that is, of course, not true. I am always doing something! But what I meant is, we just relaxed. Friday afternoon, J and I went on a big shopping trip [don’t get excited – just groceries and household items] and it took a freakin’ long time. Friday afternoons are no good when it comes to shopping, which means driving to different stores which translates into hitting traffic. We were gone for about 4 hours! 4 freakin’ hours!
I swore myself that night that I was not moving the car this weekend.
The good thing was, we came home with two free movie tickets for “Pirates of the Caribbean – At World’s End” which will be playing this coming Friday! You just got to love those promotions run by different stores. We earned the free movie tickets just by shopping items that were on our shopping list anyways. That’s how I like shopping!

Yesterday I just hung out at home, had a late breakfast and J and I watched “What’s eating Gilbert Grape“. Can you believe that he hadn’t seen this movie before? I was speechless. I have watched that movie at least 4 times, although I think yesterday was my first time I saw it in English. I just love Johnny Depp in this movie and Leonardo DiCaprio did such a great job portraying his mentally handicapped brother Arnie.

We also hung out for a while with our neighbors from downstairs. They are a very nice, recently married couple and J and I had talked about hanging out with them for quite a while, but since they’re both working full-time, we hadn’t found the time yet [and you know how it goes – it seems like you mutually like each other, but first get-togethers are always a little awkward at first, so you really need some kind of a coincidental event to finally get together. Well, that was yesterday and it was really nice.]
I hope that they’ll become a little more than our downstairs neighbors ;)

Today I pretty much put myself on the couch and stayed there for most of the day. I watched some TV, a movie [“Rumor has it” – loved it] and later some more X-files with J. I played some Sudoku, read for a while and – yes, was basically very lazy :) Oh, and I talked to my family and a friend *wink* Don’t you love days like that?

This week Kristine asked us to show her something “framed”.
Since framed photos are the very obvious, I thought I would take on a little different approach. 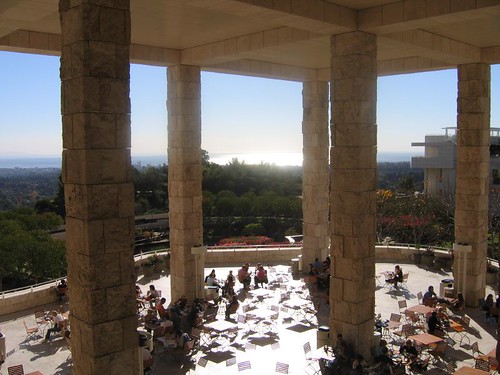 This is a photo I took at the Getty Center in Los Angeles, which is the home of the J. Paul Getty Museum.
The Campus, which sits on a hilltop in the Santa Monica mountains, was designed by architect Richard Meier and overlooks the disparate aspects of Los Angeles’s landscapeÃ¢â‚¬â€the Pacific Ocean, the Mountains, and the vast outstretch of the city.

Richard Meier used travertine, steel and glass to create a fantastic composition of elements and the mix of curvilinear elements and the grid, which is created by the travertine squares, turns the building itself into a piece of art.

Throughout the campus, you’ll find spots that offer framed panoramic views of every different side of LA. It’s just breath-taking.

I know, I just recently created a new header for my blog and I really liked it, but I got kind of tired of the old layout and found this one by accident. I tweaked it a little bit to my liking and I think it looks great now :)

I couldn’t get the blogroll to work on my old layout either, so that was one more reason to change something.

What do you think? 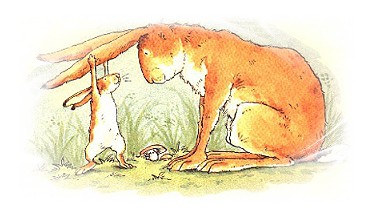 Does your Mom know how much you love her?

So, today is Mother’s Day! I hope you all have made sure that you tell your Mom today how important she is to you. I sent a card to my Mom a week ago and as I heard from one of her friends today, she received it early and was so moved by it that she showed it her friends when they went out for coffee yesterday.
Sometimes we don’t tell people enough how much we love them and how important they are in our lives. Living away from them has made me appreciate my family and friends even more.

Thank you all for being there for me, for being my friends despite the physical distance.

Our lovely Kristine has asked us to show each other a handful of something for the weekly SPF. I thought that was an interesting assignment and I am curious to see with what you guys came up. 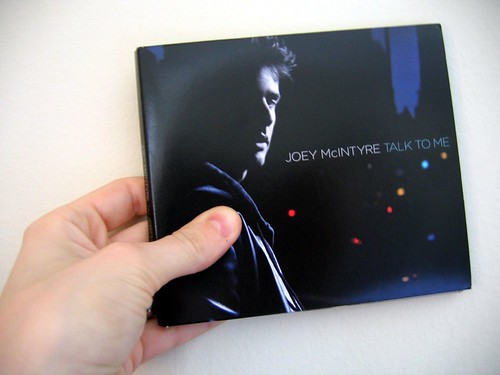 May I recommend to you a handful of good, independent music?
Before you regain your ability to speak after reading the name of the singer of this album, let me say that he has become a really incredible independent artist and singer after his boy band career. Please don’t judge him by that, but give his solo albums a chance. You can listen here and yes, it’s no coincidence that the music of this album sounds like from a different time… it’s a tribute to Frank Sinatra. Enjoy!