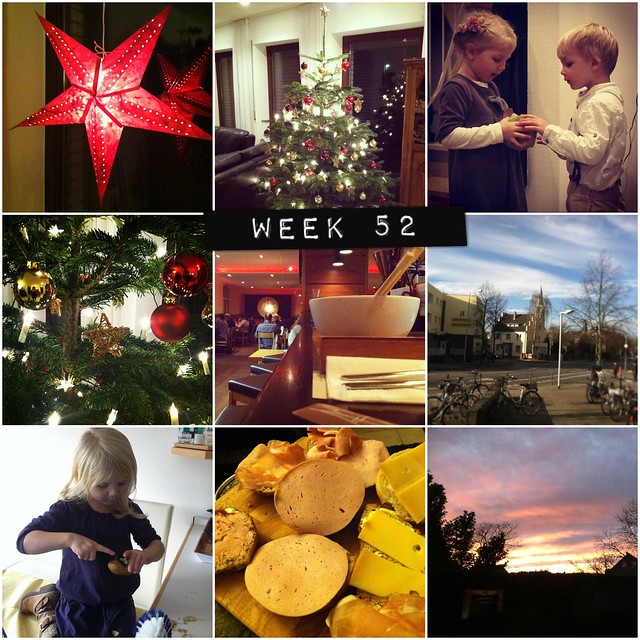 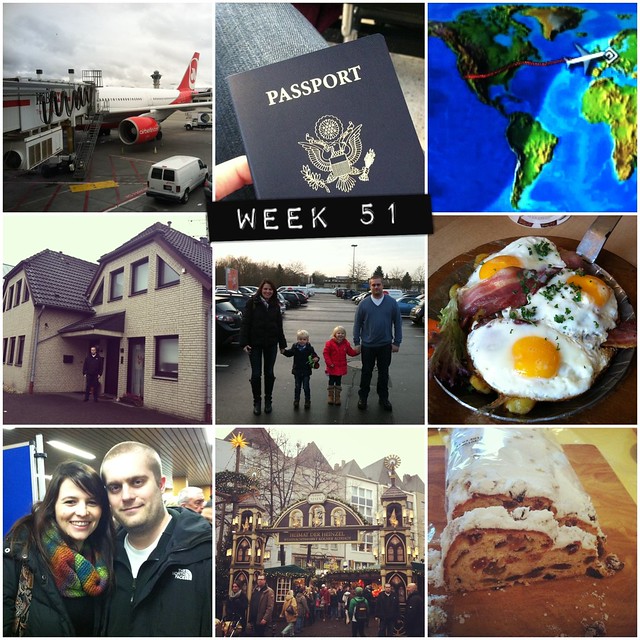 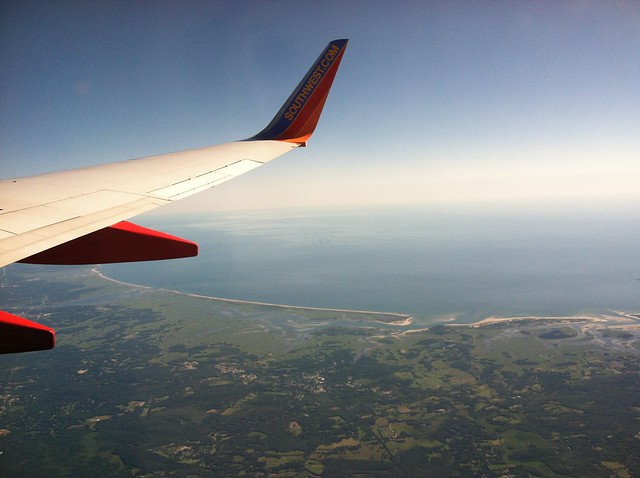 When you guys are reading this, J and I will be somewhere over the clouds on our way to – or maybe already in – Germany (obviously not with Southwest, ha!, but we’re taking a connecting flight down to LAX first and are then hopping on a straight flight from LAX to DUS).

I can’t tell you how excited I am (well, maybe you have already picked up on it because I can’t shut up about it! ;)) that we’ll be spending the holidays with my family and friends. It’s tough to be away for a whole year and than try to make up for it in 2 or three weeks over Christmas, but it’s definitely a very intense, wonderful time every time.
As always, I’ll be trying to update a few times “from the road”, but don’t be too surprised if it might be a little quieter around here the next few weeks. Regular posting will resume after January, 6 at the latest!

I hope you all enjoy the rest of the holiday season! It’s such a special time of the year! 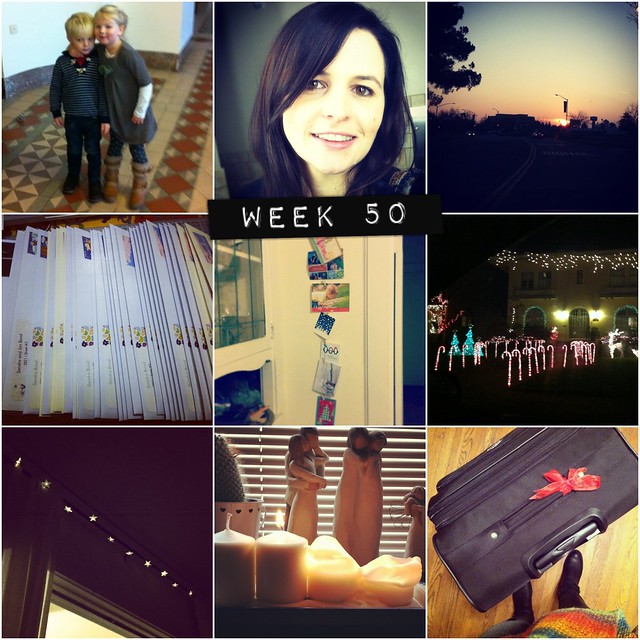 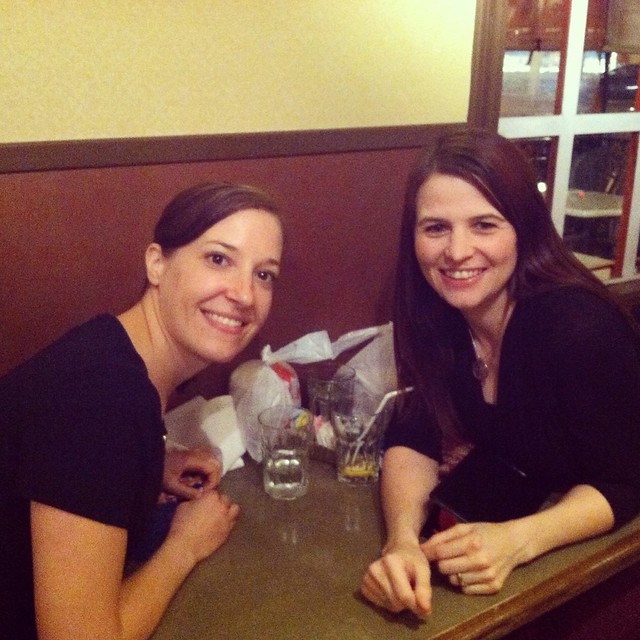 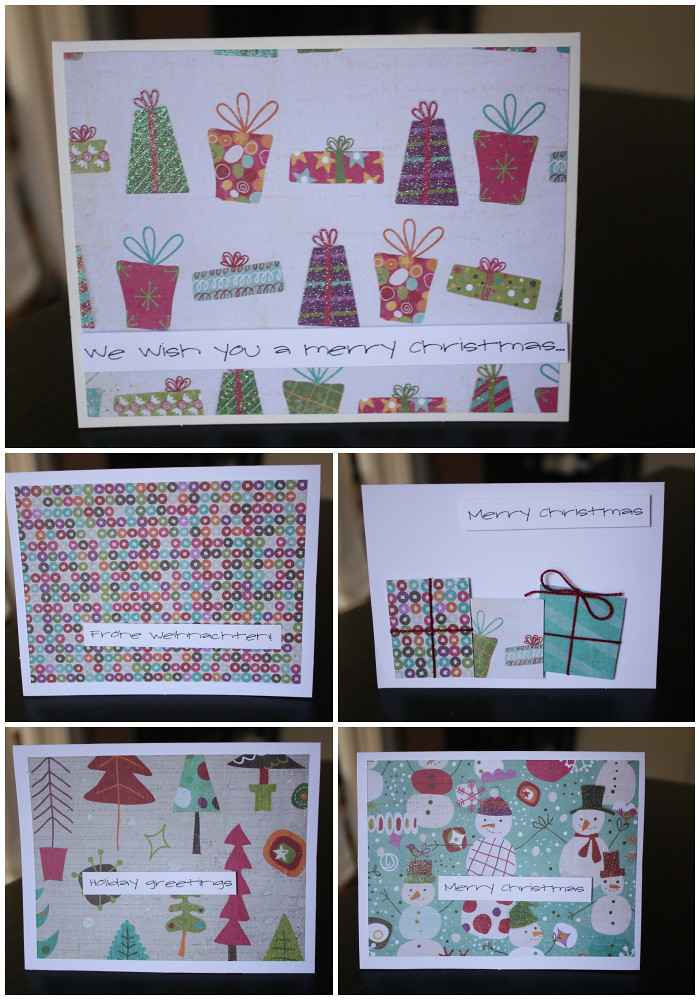 I thought I’d showcase some of the handmade Christmas cards that I made this year. It’s been quite the production (I made about 70 cards and I still need more and am supplementing with some photo cards for family and some friends). Making cards is a long-standing tradition for me. Way back when I still lived in Germany, I used to get together with a friend for a couple of weekends before Christmas and we would make all our cards together. We drank copious amounts of tea, ate Christmas cookies, listened to Christmas music and crafted. I miss that. Doing it by myself is just not the same, but it’s something that I still do and enjoy to do every year! 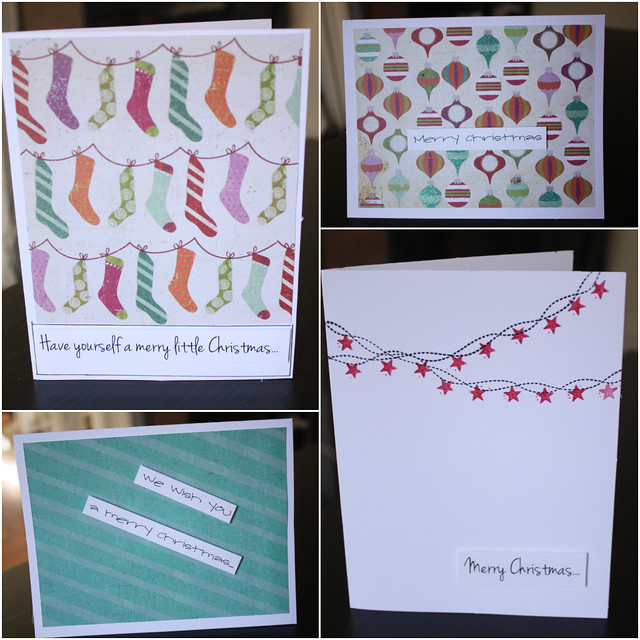 My cards used to be more time-consuming and elaborate when I had to make fewer cards, but I had to streamline the process a bit in the last few years due to the sheer volume of cards I (happily!) send out every year. I still think it adds a nice personal touch to the holidays! I don’t think I could ever give up on sending Christmas cards! 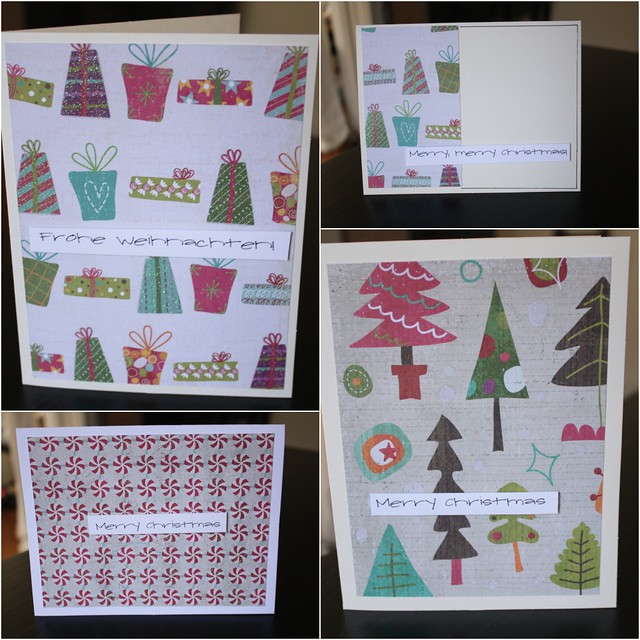 Do you send Christmas cards or do you think it’s unnecessary and old-fashioned? 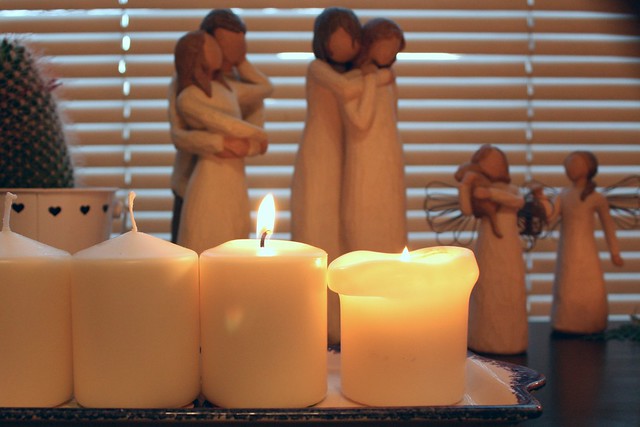 I can’t believe in two weeks is Christmas! This holiday season is flying by!

I lit our the second candle on our advent tray yesterday (yeah, I know it’s not anything close to an advent wreath by a long shot, but better than nothing!). Don’t you love my arrangement of the Willow tree figurines that are standing by? :)

Germany had (a lot!) of snow this last week and I couldn’t be more thrilled about it. I really want a white Christmas! My only worry is that the snow might interfere with our travel plans, but at least we have a direct flight from LAX to DUS and we won’t be having a stop-over in London this time. Hopefully the weather will be agreeable next Sunday/Monday!

We spent the whole weekend preparing for out trip (we’re leaving in less than a week!), running errands, deep-cleaning our whole apartment (so that we won’t be coming back to a filthy place!), working on my Christmas cards and preparing packages that need to be sent out. I also had some time to knit, drink tea and watch some Christmas movies (e.g. ‘You’ve got mail’. Love it!).
I really, really love the holiday season. I wish it would last a little longer than it usually does.

What did you do this weekend? 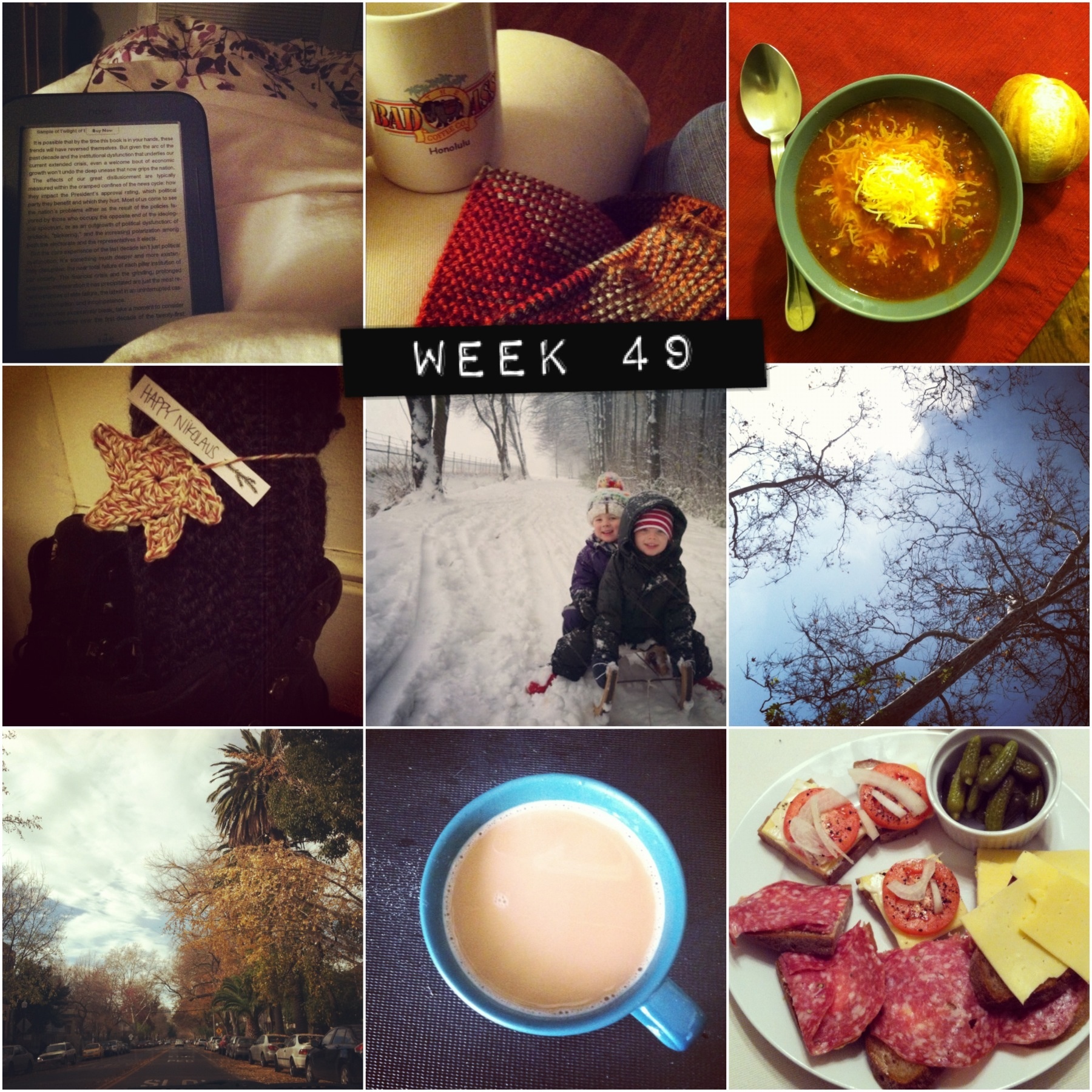 Relationship Real Talk by Holly (Holly would if she could).

I also would like to announce the winner of my little NaBloPoMo-giveaway! The True Random Number Generator has spoken this morning and the winner is of the three star-ornaments is ERIN! Congratulations! 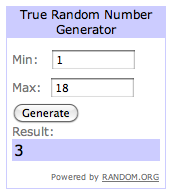 I’ll contact you via email shortly to see where you want your ornaments sent. 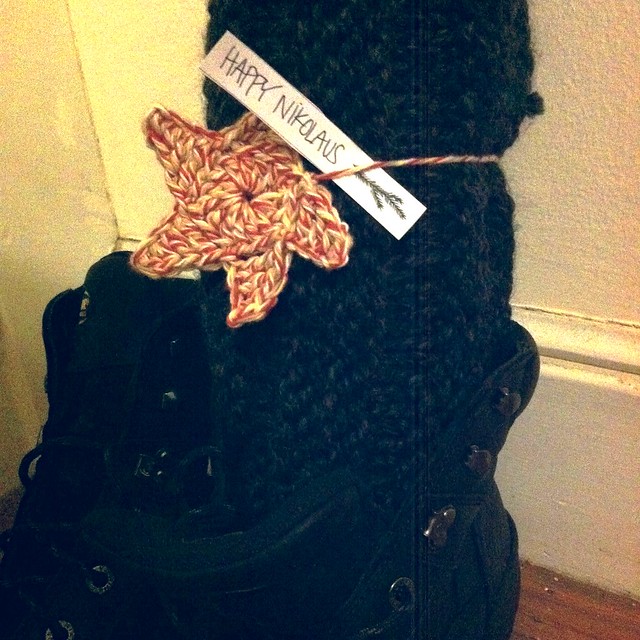 Today is Saint Nicholas Day (German = Nikolaus). Unfortunately my shoes turned up to be empty this morning, might be due to the fact that there’s no “Saint Nicholas Day” in the US. Oh well, but I did put a little something in J’s boot this morning. He’ll be surprised :)

In Germany, Saint Nicholas Day is a celebration for children related to surviving legends of the saint, and particularly his reputation as a bringer of gifts.

Saint Nicholas of Myra is the primary inspiration for the Christian figure of Sinterklaas/Santa Claus. He was a 4th century Greek Christian bishop of Myra (now Demre) in Lycia, a province of the Byzantine Anatolia, now in Turkey. Nicholas was famous for his generous gifts to the poor, in particular presenting the three impoverished daughters of a pious Christian with dowries so that they would not have to become prostitutes. He was very religious from an early age and devoted his life entirely to Christianity. In continental Europe (more precisely the Netherlands, Belgium, Austria and Germany) he is usually portrayed as a bearded bishop in canonical robes. [Wikipedia]

The American Santa Claus, as well as the British Father Christmas, derive from these legends of Saint Nicholas (I just learned this!).

Saint Nicholas is usually celebrated by children putting a boot called Nikolaus-Stiefel (Nikolaus boot) outside the front door on the night of 5 December. Saint Nicholas fills the boot with gifts and sweets overnight, and at the same time checks up on the children to see if they were good, polite and helpful the last year. If they were not, they will have a tree branch (Rute) in their boots instead. Sometimes a Saint Nicholas impersonator also visits the children at school or in their homes and asks them if they have been good (sometimes ostensibly checking his golden book for their record). He is often accompanied by Knecht Ruprecht (Servant Rupert). Tradition holds that he appears on St. Nicholas day alongside Saint Nicholas (often, his black clothes and dirty face are attributed to the soot he collects as he goes down chimneys) and hands out a the switch to the naughty children. He was pretty scary (at least to me when I was a kid) and the whole giving-a-switch-to-chastise-naughty-children is a pretty cruel concept, if I think about it now! Ha! (What is it with the Germans and their cruel traditions and kids’ books? ;)). Well-behaving children, of course, received sweets and little gifts from Saint Nicholas’ big sack. [Wikipedia]

In more catholic regions, Nikolaus is dressed very much like a bishop and rides on a horse, welcomed at public places by a large crowd. Typical in Germany for Saint Nicholas Day is the Weckmann, a pastry made of sweet leavened dough. [Wikipedia]

When we were really little, it must have been around kindergarten-age, my Grandma kept a big golden book that she gave to Saint Nicholas, obviously some family member that dressed up with a white beard and a red coat, who read from the book if we had behaved well over the last year. I always had great respect for Saint Nicholas, and so do Tom and Greta. Ha! My uncle usually dresses up as Saint Nicholas every year and visits my sister’s house to talk to the kids! So much fun!

I think I am going to go home tonight and make some hot chocolate. Hot chocolate perfectly makes up for an empty boot this morning, don’t you think?!