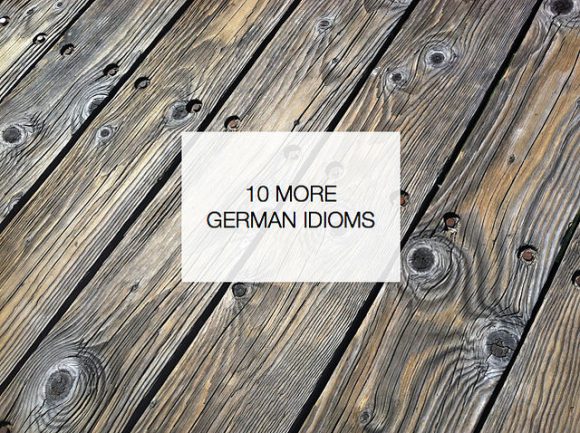 This is a series I’ve carried through a number of years of NaBloPoMo and I’ve been told that people always enjoy learning more German idioms, so I’ll attempt to find some more German sayings (along with their sometimes hilarious literal translations).

I tried to only pick idioms that are used pretty frequently in today’s everyday German (as far as I know). I use these pretty frequently and I also really enjoy teaching them to my non native German-speaking husband. He’s successfully dropped one or the other German idiom in conversation with me in the past and it’s always a bit of a fist-pump-kinda-moment. Hehe.

Um den heißen Brei herumreden. (To talk around the hot porridge.) This is pretty self-explanatory, right? It means to not get to the point, but to beat around the bush.

Himmel und Hölle in Bewegung setzen. (To put heaven and hell into motion.) Oh hey, look, this one is always the same in both languages: to move heaven and earth.

Hier steppt der Bär. (The bear is tap-dancing around here.) We say that to say that it’s a good party and we’re having a good time.

Ich komme in Teufels Küche. (I’ll get in the devil’s kitchen.) This means to “get into hot waters’, to get in trouble.

Er fällt immer mit der Tür ins Haus. (He always falls into the house with the door.) This is particularly German, I guess because it means “he always gets right to the point/blurts it out”. We Germans do like to be direct and oftentimes a bit blunt.

Gib ihm den kleinen Finger und er nimmt die ganze Hand. (Give him your little finger and he’ll take the whole hand.) Give an inch and they’ll take a mile.

Geh mir aus der Sonne. (Step out of my sun!) This could literally mean that someone is blocking the sun from you and you’re asking them to step aside a bit, but it’s often used figuratively to tell someone that they’re annoying you and that they’d rather have you shut up and disappear as not to dampen your mood.

Teach me an idiom! Or ask me for the translation of an English idiom into German!