More random thoughts, yay. Aren’t you excited? I am linking up with Amanda from Running with Spoons for Thinking out Loud again.

+ My Mom’s surgery last Friday went well. Thanks so much for sending well wishes and good vibes. I was able to talk with her on Saturday (and every day since then) and she sounded really good on the phone. It was a huge relief to me. We also found out that the growth in her adrenal gland was benign (this is  THE BESTEST NEWS EVER. Especially since the doctor’s didn’t really present his outcome as much of a possibility. I can’t tell you how heavy the weight was that was lifted off my shoulders.

She was released today (in under a week, which is fast for German standards after such a big surgery! They had to make an 8-inch incision on the left backside of her  torso) and she will most likely go to a rehabilitation facility again for three weeks (also standard in Germany) to gain back core strength and flexibility. You guys, I am so, so relieved. Being so far away is hard.

+ Staying on the topic of surgery, I found out that my sister will also have to have surgery.  It’s less invasive (thank goodness!) as it will be an arthroscopic procedure on her shoulder, but it’s tomorrow. Can we just stop with the surgeries, please?
She was recently complaining to me how in the world it can be that she had several surgeries already (on her knee, her wrist, her foot… now her shoulder) and other things (hernia, kidney stones) and I have had NOTHING (oh, besides a broken leg when I was two and iron deficiency anemia about a decade ago). I can’t really say anything, because it’s true… I’ve been mostly spared from health issues so far. Not that I am wishing anything on my sister, but I am very thankful that so far I haven’t had to deal with any major injuries or health problems in my life.

+ My own scraped-up elbow is healing nicely. It’s been a week and a half since my fall and I’ve used ointment and band-aids (big ones!) to keep the area covered. It’s pretty much healed except for a tiny spot (which seemed to be the one that was scraped the hardest). Yay. Now I just hope that it won’t leave scar.

+ I am starting week two of my Runtastic Results strength training plan and I can only say three words: 1) ‘ouch’ (I am sore!), 2) “yay” (it’s more fun than I thought it would be!), and 3) ‘awesome’ (I can already feel getting stronger!).

+ Four books became available at my (digital) library at the same time. Does that ever happen to you? I happens to me all the time. Sigh. Nothing for days, and then four book all at once. I hope I can finish them in the next 21 days.

+ I made German apple pancakes last weekend and they were so good. They’re a little different from American pancakes (as you can see) because they don’t use leavening. Just flour, milk and eggs. I added a bit of protein powder, which made them a great post-run meal!  I love apples (all year around, as I told you in my recipe post on Monday), but I really can’t wait for apple season this fall! 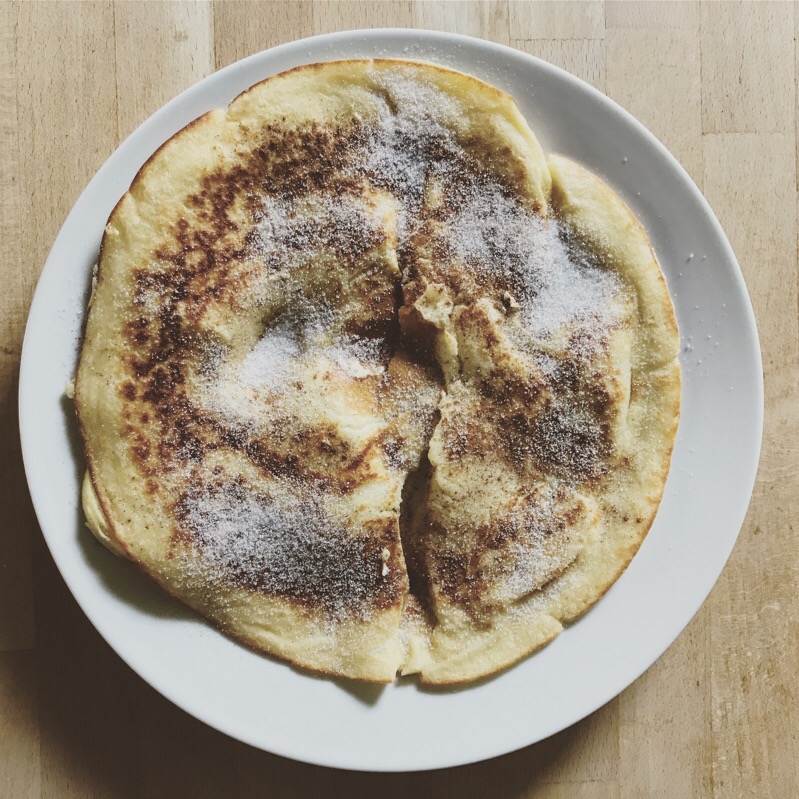 What’s a random thought on your mind today?