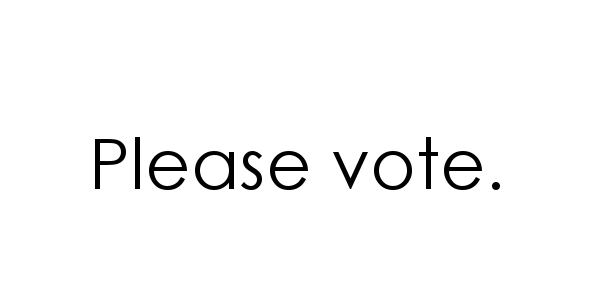 Tomorrow is an important day.

Tomorrow is the election for the President of the United States.

As a new US citizen, I urge you, PLEASE VOTE.

I don’t understand people who don’t vote. I think too many people take their right and civic duty to vote too lightly, too much for granted. Let me tell you, you gain a completely new appreciation for your right to vote, when you move to a foreign country, where you live and work and pay taxes, and yet, you have no right to participate in the democratic process even though the decisions that are made on local and federal level affect you, too. It makes you feel neglected, ignored, unheard.

I am not saying that legal residents should have the right to vote (I think this is an issue that is more complicated), but I do want to emphasize how lucky you are if you can participate in the electoral process and that everybody should be aware of how important it is to do so.

This time for the first time I am allowed to vote in this country (despite having already lived here for the last 6 years) and I am absolutely thrilled to be able to vote for my president tomorrow.

I know, politics can be frustrating at best and upsetting and downright futile at worst, but if you’re not making use of your right to vote (which still a very high percentage of people in this country do not), you’re just aggravating the problem. You really do not have an excuse not to vote. You don’t have the excuse to say that your vote doesn’t matter anyway or that you don’t know who to vote for (which at this point in the campaign is mind-boggling to me as the choices are so extremely opposite),  because honestly, that’s part of your responsibility  as an adult living in a democratic country: to listen to the news or get online occasionally.
It’s really so damn easy these days to stay informed.

Here’s a hint: every political party has a website and they usually provide sweet and  short bite-sized information, which should be easy to digest even for the disinterested voter, in order for everyone to make a somewhat informed decision tomorrow. They even provide little voting guide print-outs, or you can scribble down their endorsements, to make it really easy in the voting booth. You didn’t know that? Well, at the very least,  take those five minutes tonight if you haven’t already done so.

I personally have very strong beliefs about this election, but I don’t care if you are a Democrat, a Republican, or an Independent.  All I care about is that you get out there tomorrow and cast your ballot. Hopefully you’ve paid at least a little bit attention in the last few weeks, educated yourself about the political platforms and decided which candidate is right for you. Because this is what democracy is all about. The president should be  the person who gets the majority of support from people like you and me.

If you need more convincing that you need to vote tomorrow, I suggest you go and read Terra’s “5 signs: Why we should vote“. I couldn’t have said it any better and I agree wholeheartedly.