OMG you guys, thank you so, so much for all the sweet birthday cards, emails, facebook-messages and calls for my birthday yesterday!

I don’t know what to say. It meant a lot to me that so many people thought of me yesterday, especially since my sister (first and foremost) and the rest of my family were so far away.

It still, even after a few years now, feels weird to not celebrate my birthday with my sister.
Obviously, we each never had a birthday to ourselves growing up and always hadÂ to share it with each other, but you get so used to it that it really feels strange if we don’t celebrate our birthday together.

So, as you already know, my day started off with cupcakes. Made by yours truly. From scratch (that is actually the first question I was asked when I brought them into the office “Did you make them?” – “Ah yes, why is this such a big surprise?”)
I had decided to not take the day off this year, because my birthday fell on a Tuesday, but in retrospect, I should have just not listened to my own stupid “rationality” and spent that day celebrating myself – not working 10 hours at the office. Oh well. We’re going to celebrate a little more this weekend :)

Here’s a glimpse of what awaited me when I got home: 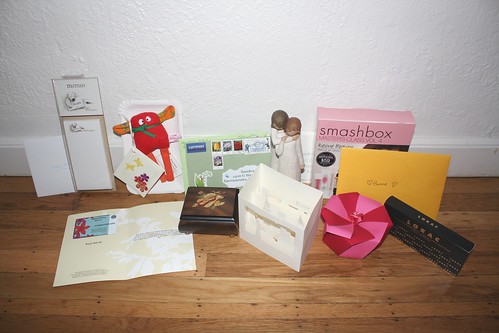 It was lovely to open the letters and packages (and there are some more on the way, as I was told!) of people who were thinking of  me yesterday!

One thing I want to mention though is (also as a precaution for future gift sending): ordering stuff off the Internet and taking the shipping-shortcut by having the gift directly send to the recipient is GREAT! I do it all the time.
Just make sure that there is either a) a note in the package with a little message from you and/or b) make sure to tell the person – that you’re having something send to –  IN ADVANCE what to look out for (a UPS package with so-and-so as the sender, an AMAZON-package,… ).

I happened to open two of my gifts prematurely – which I hate! I very much like the anticipation of opening my gifts on my actual birthday! – and I also received two gifts where I have NO IDEA who sent them.

If one of the gifts (not necessarily pictured) was from YOU – please come forward and let me know, so that I can extend my heartfelt and sincere gratitude to you. I’d feel awful not thanking you for a gift, just because I didn’t know it was YOU who sent it!!

Thanks again for all the LOVE you sent me! It really made my day!