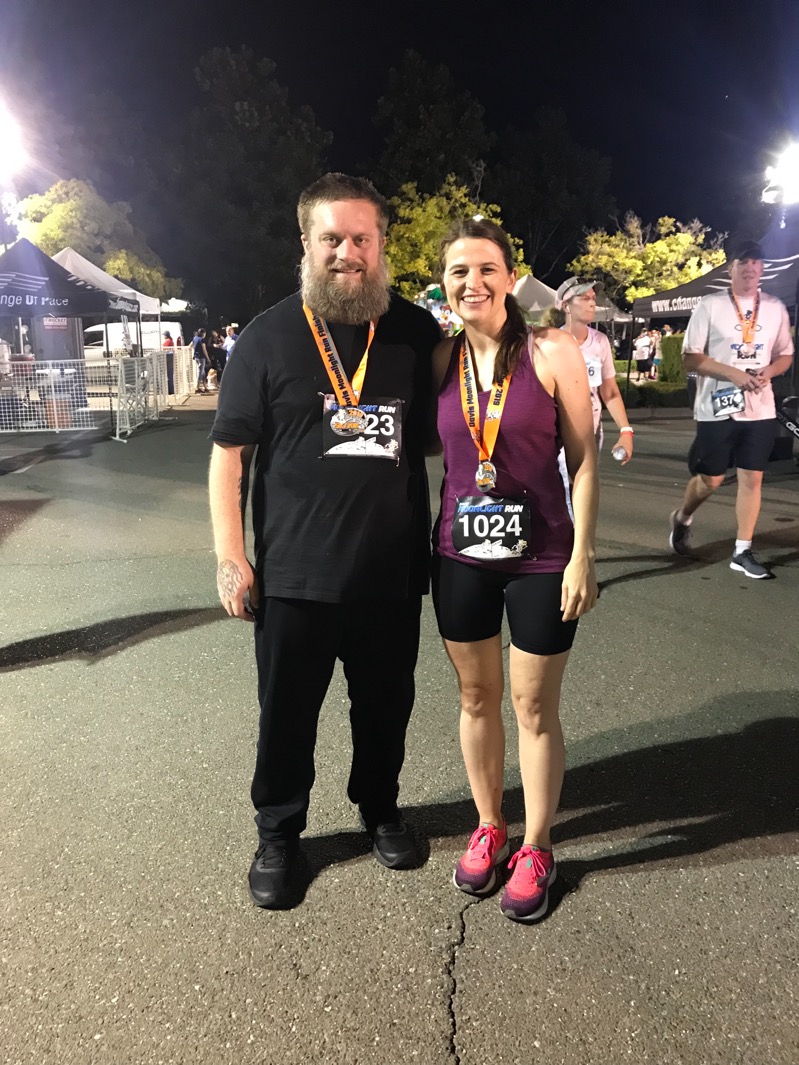 Last weekend, I participated for the fourth time in the Davis Moo-nlight Run. It’s becoming one of my favorite races and this year was extra special because J kept his word from last year and signed up to do the 5k.

He’s not in shape to run any races, but he’s been trying to be more active and so we agreed to power-walk the 5k course. The fact alone that he signed up for a race with me and followed through is a huge victory! I am so proud of him.

As the name suggests, this is an evening race. The race goes through a residential neighborhood in East Davis but the start and finish lines are in an industrial part of town, which means there is plenty of easy (and free) parking. The start time for the 5k was 8:15 p.m., so we had plenty of time to get there, pick up our shirts and race bibs and then get some dinner before lining up at the start line. 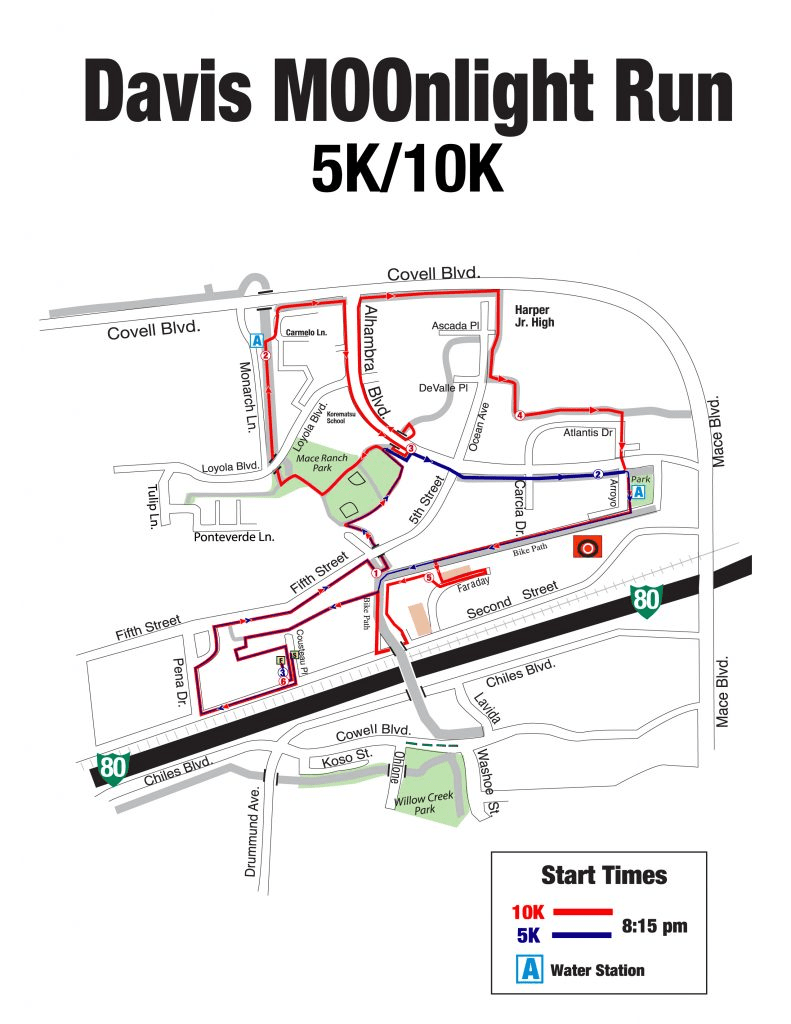 We hung back a little bit to let all the faster runners go first, but I was happy to see there were quite a few walkers signed up. We were off right on the dot at 8:15 p.m. 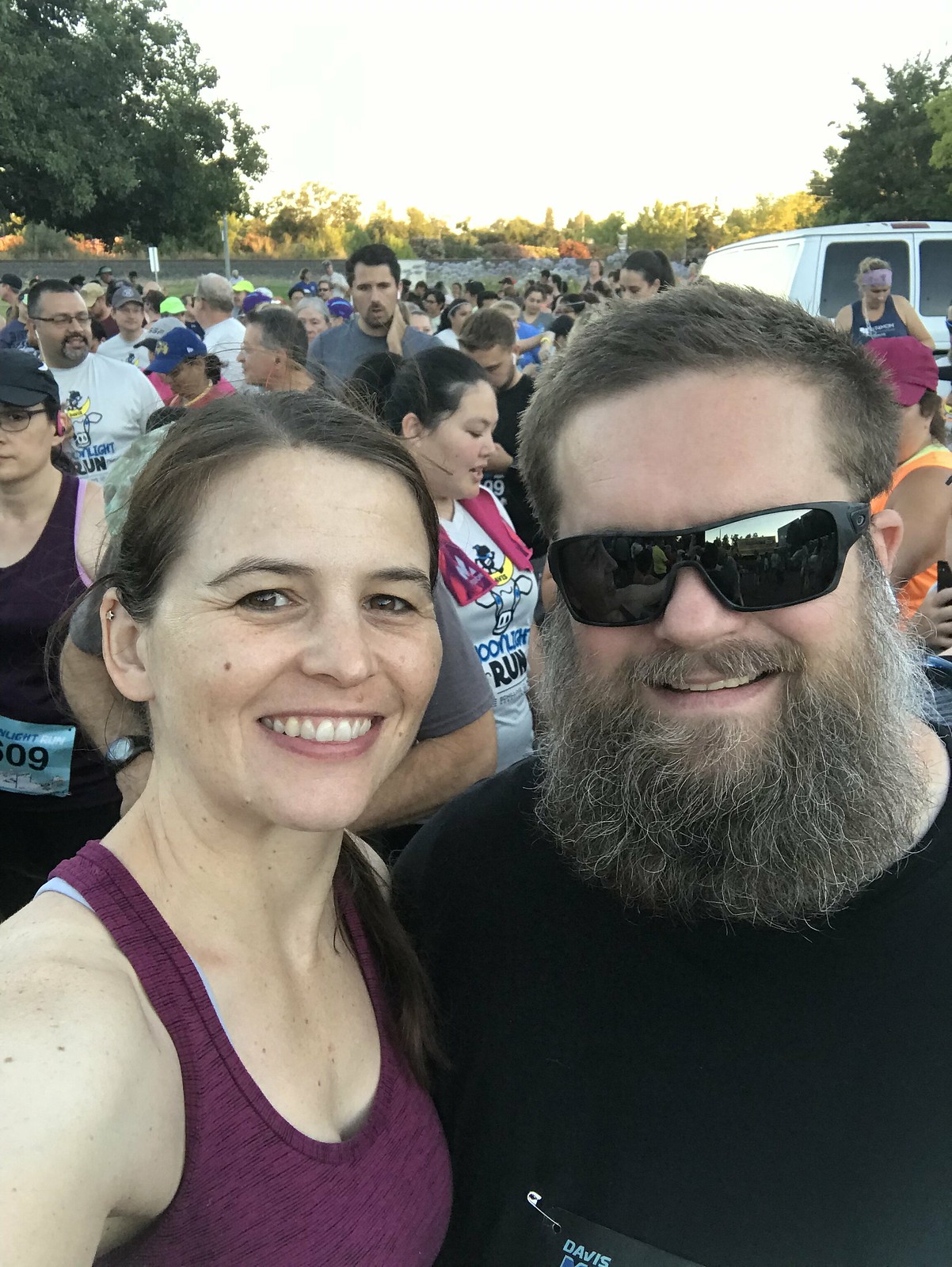 J was super-motivated, he could feel the energy of the crowd (told you!) and picked up the pace. To be honest, I was a little worried that he was going out too fast and wouldn’t be able to hold the pace for the whole distance. He had been walking more lately, but we hadn’t really trained or timed his walks, so we really didn’t have anything to go by.

We figured, he could definitely finish in <60 minutes, but we didn’t know how fast exactly.

He got in the zone and marched on and I was super-impressed by his determination. It was still quite warm when we started, but luckily, the sun had started to go down and there was a light breeze.

Strangely, there was no mile 2 marker, but my Garmin had been pretty accurate, so when my Garmin hit two miles,  I told him that he walked the 2nd mile at a 17:12 min/mile pace. Dang!

I don’t know his last split, because I ran the last ¼ mile, so I could take pictures and a video when J made it to the finish line and therefore didn’t record his last time at the mile 3 marker, but he must have pulled off negative splits (his third mile being somewhere around 16:40 min/mile), because he officially finished in 53:12!!! 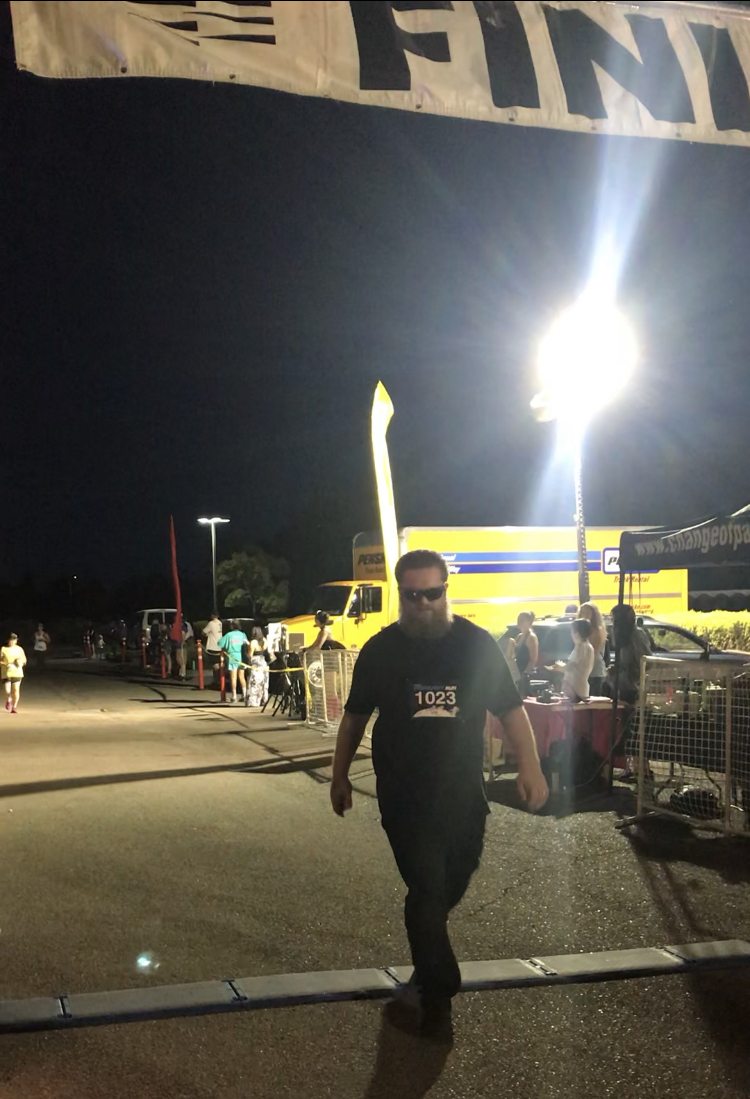 I’d say that is well below the 59:59 minute goal he set for himself! Hell yeah! 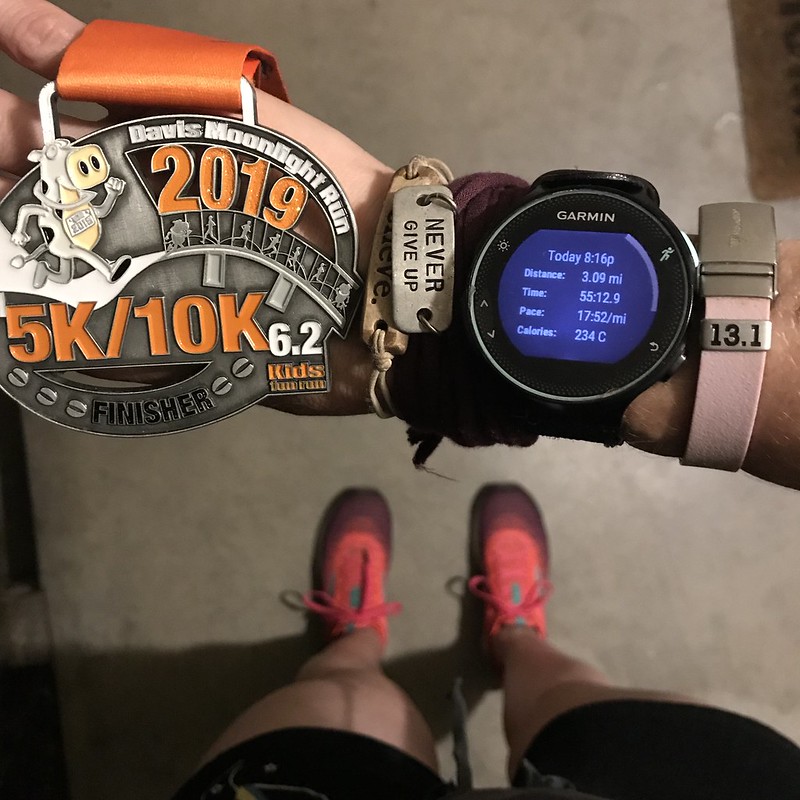 Time here is not accurate.
I turned off my Garmin a couple of minutes late, but here’s my obligatory medal shot.

He was euphoric and the first thing he said to me when he crossed the finish line was “this was so much fun, when can we do this again?”

Well, let me tell you, there is not much that could have made my runner’s heart any happier! 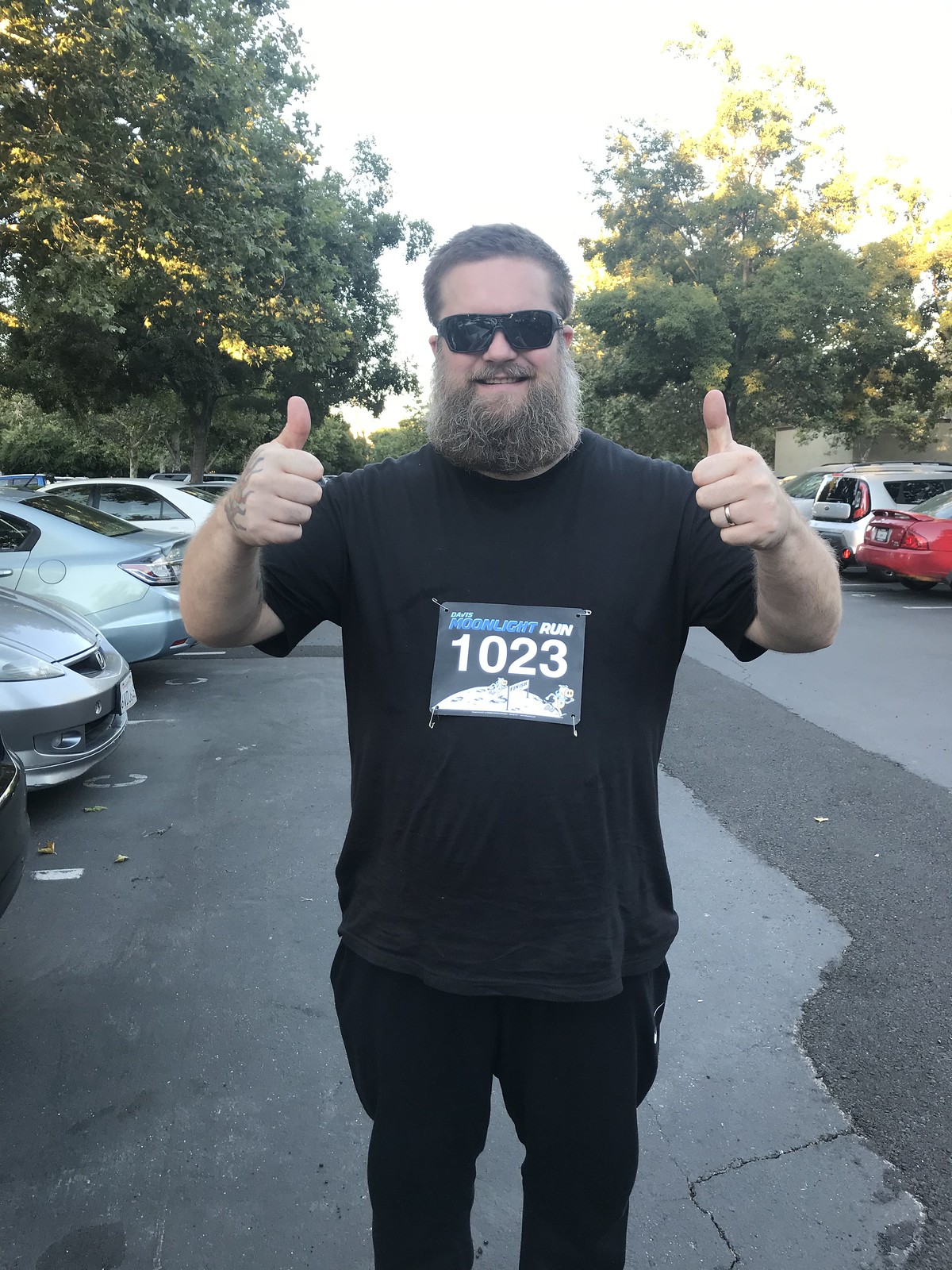 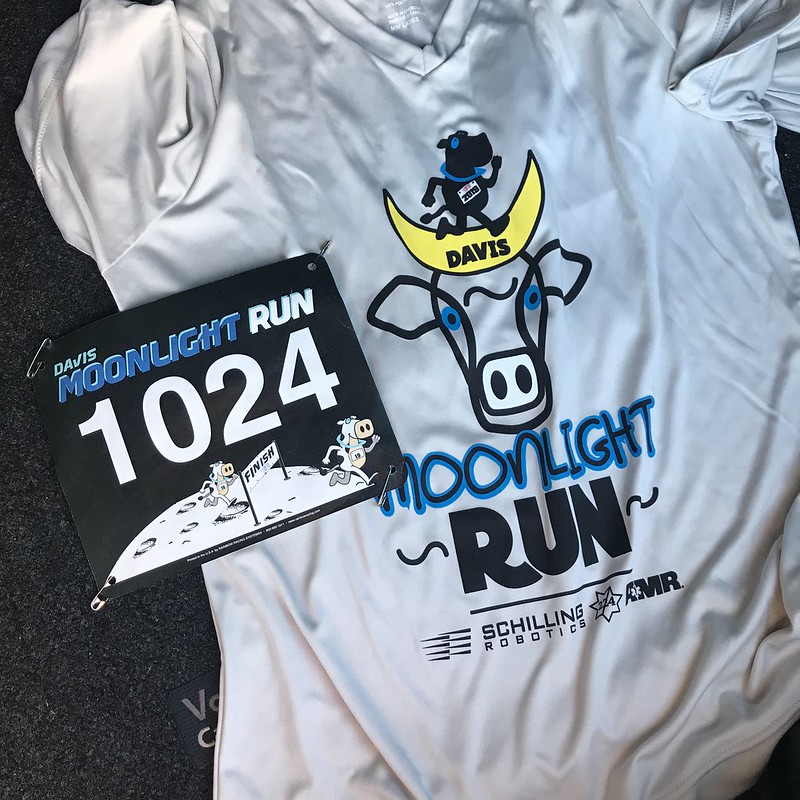 I thought the t-shirts and medals were cool this year! J was really excited about the swag, too! I mean, every runner/walker deserves a medal!

I am so, so proud of him for following through, for finishing strong, and for making himself believe that he can do this!