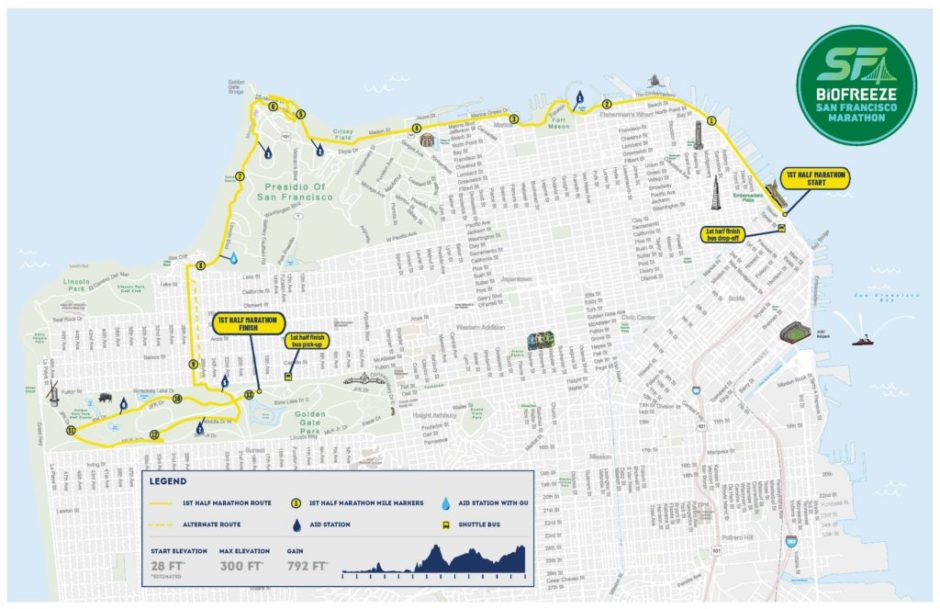 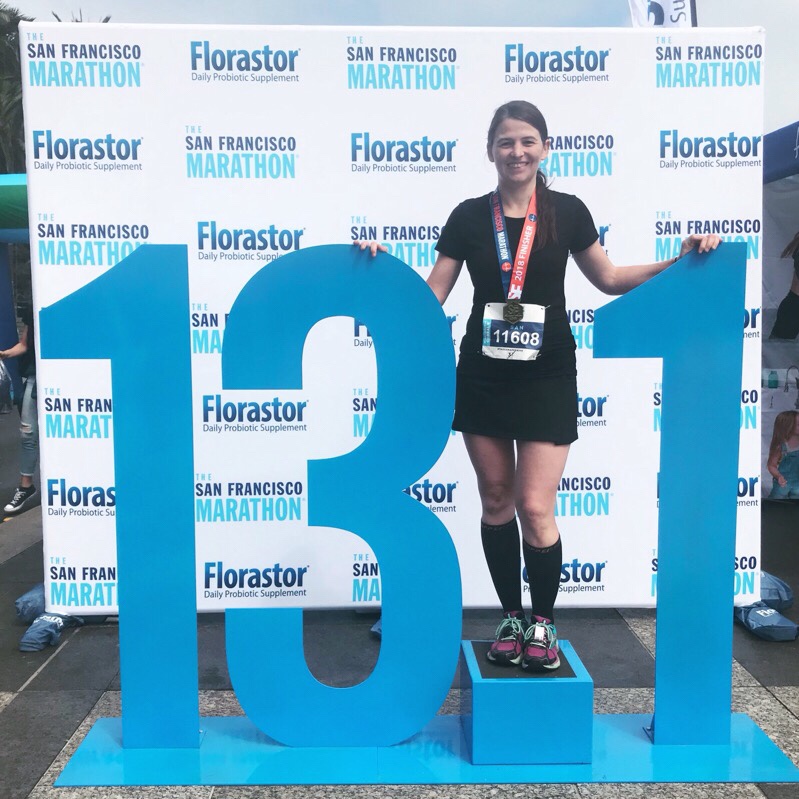 A week ago, I ran the (1st) SF half marathon again. This race has become one of my favorite races (albeit an expensive one) because it combines a great race with a fun weekend in San Francisco. I was lucky that I signed up last year at the bargain price of $85 dollars. This was cheap. Prices went up to $125 for the half marathon, even more for the marathon, until shortly before race weekend.

Still, this race is (relatively) close to me (2 hours from Sacramento) and it’s just a great race all around.

Last year, I took the Amtrak into the City and since that had worked out so well, I decided to do it again this year. J dropped me off at the Amtrak station around 10:30 a.m. and I switched to BART in Richmond and was in Downtown SF with my backpack at 1 p.m.

I walked to my hotel near Union Square and was able to do an early check-in. I dropped off my backpack and then headed out to the Expo to pick up my bib and race shirt. I caught the free shuttle bus that departed from Embarcadero/Market St and it took me to Fort Mason in 30 minutes. 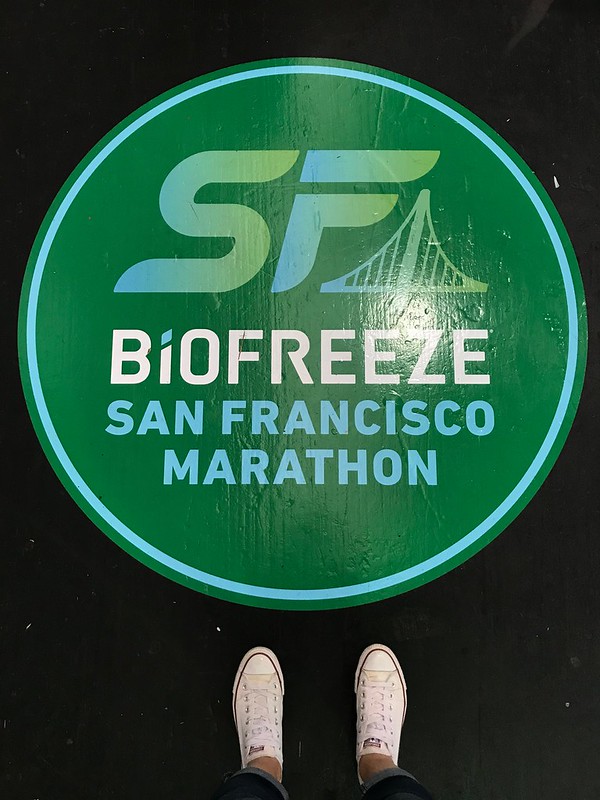 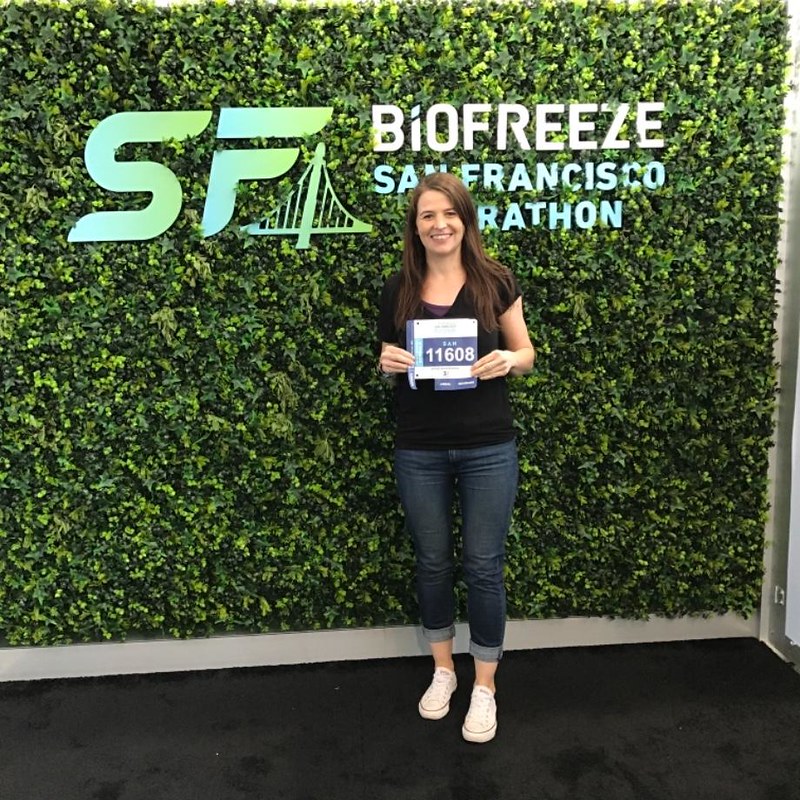 I picked up my bib + t-shirt, got my picture taken at the Biofreeze wall, the new sponsor of the SF Marathon, and grabbed more water and a sandwich at the local grocery store, before starting my walk back to the hotel. I walked through Great Meadow Park over to the piers. The weather wasn’t as clear as last year, and Karl the Fog was keeping the Golden Gate Bridge well under wraps. No pretty views of the bridge for me! 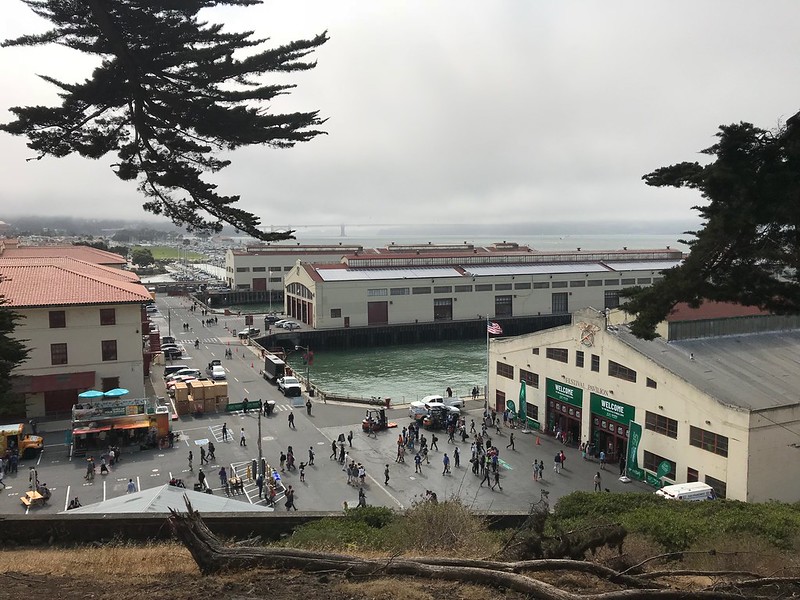 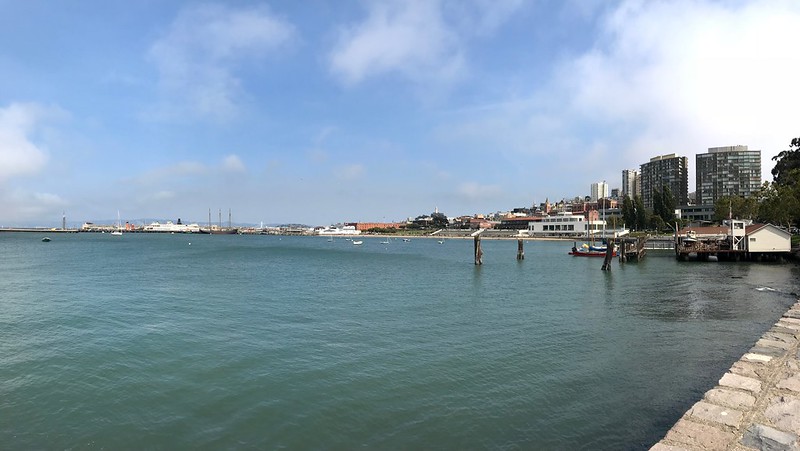 I ran into some Germans on the way over to Fisherman’s Wharf (when do you NOT run into other Germans in SF, I ask you?). It was a Dad and his two teenage kids and he was gesturing towards the SF Marathon swag bag on my shoulder and with (very) broken English asked me where the Expo was. You should have seen the relief on his face when I responded in German and told them the way. Haha. 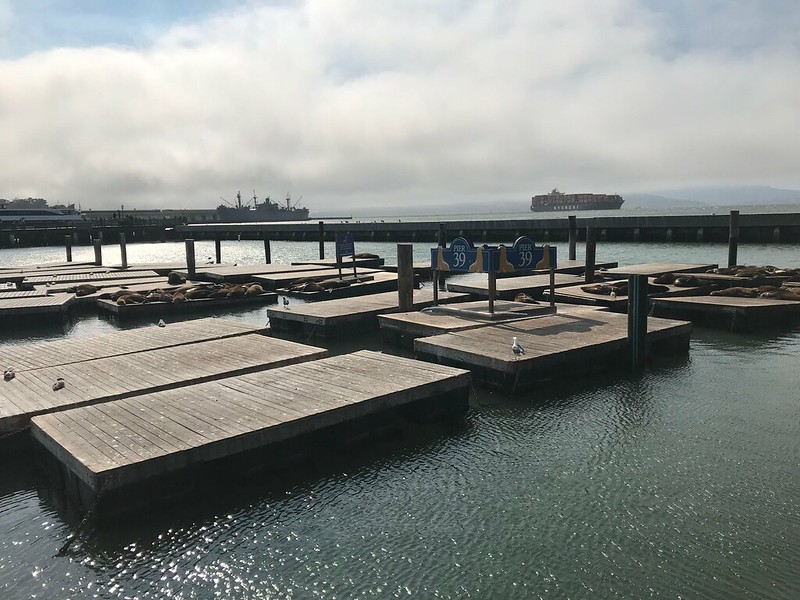 I paid a quick visit to the sea lions at Pier 39 and then ran into the  Ben & Jerry’s ice-cream carnival a few piers down, so of course, I had to stop for a free small cup of caramel cookie fix ice-cream. 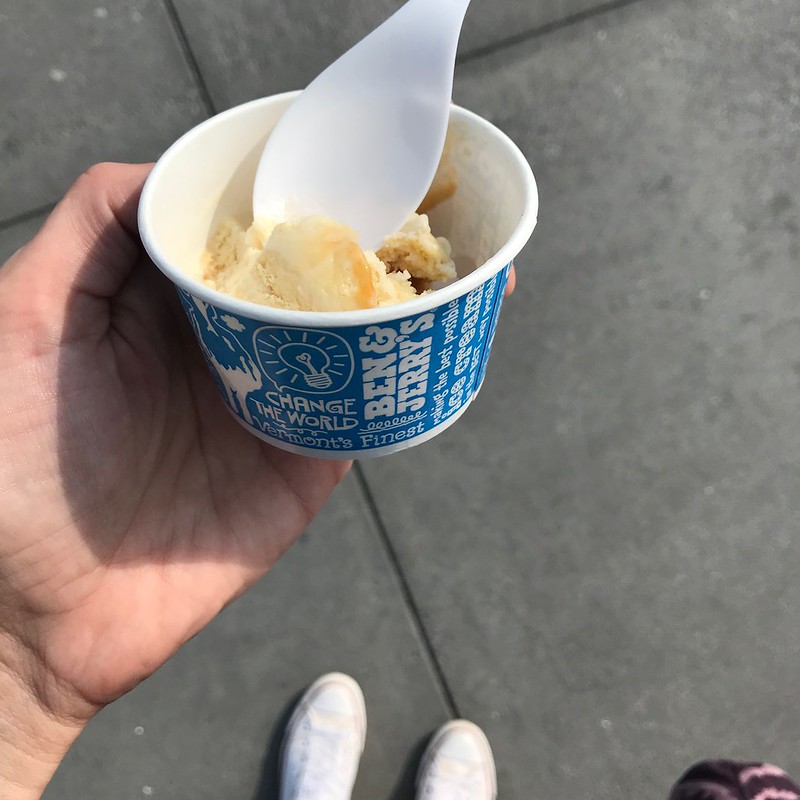 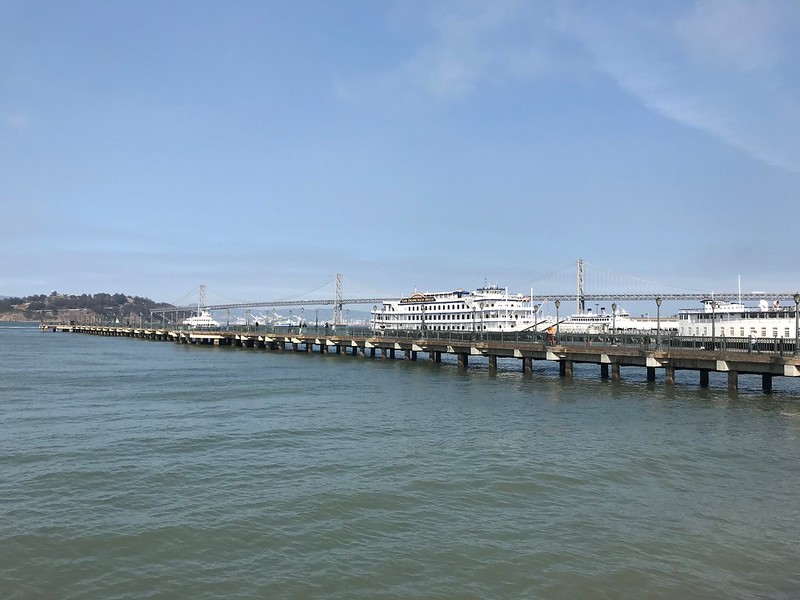 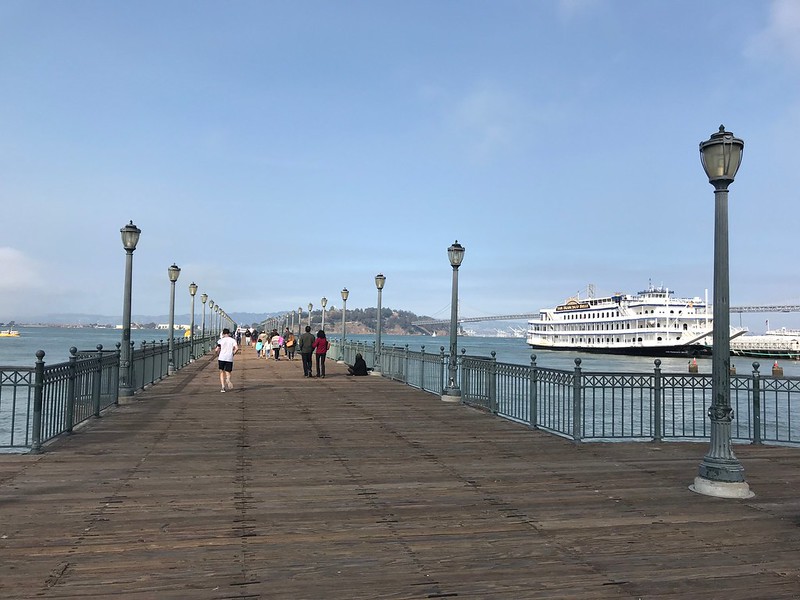 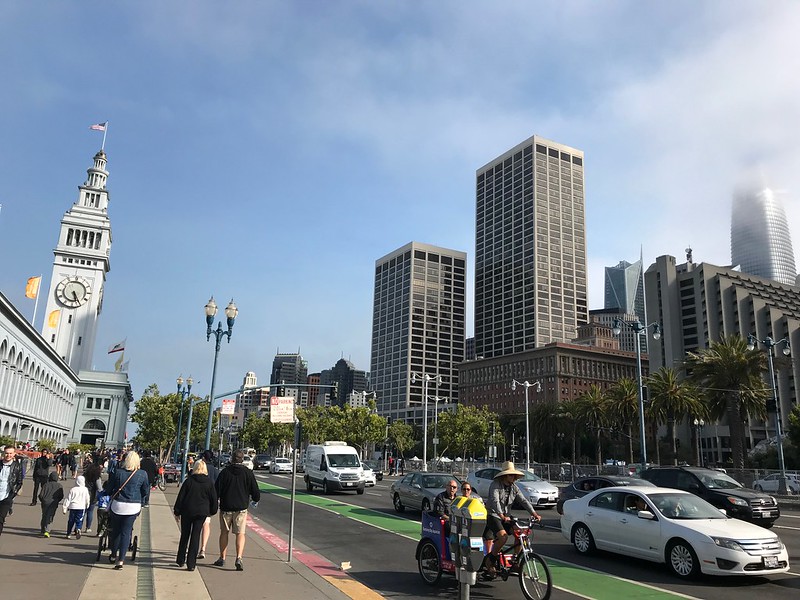 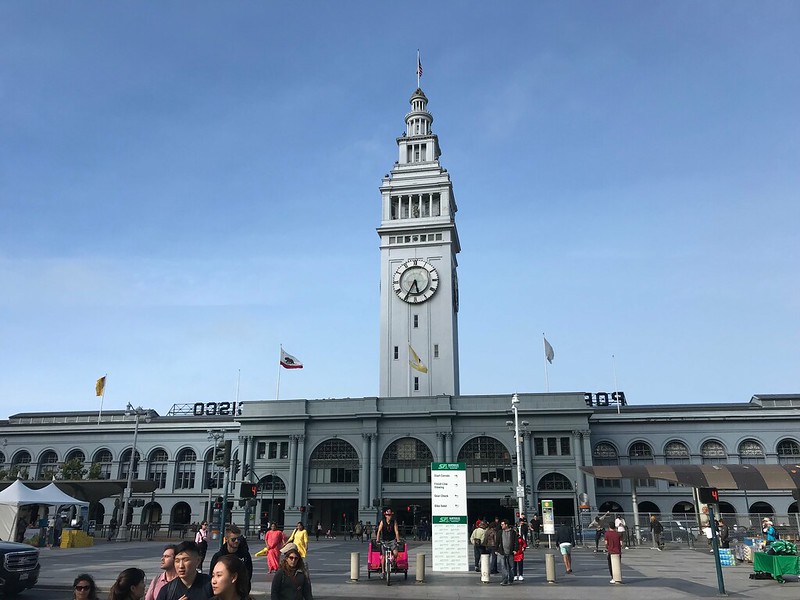 I had dinner at the food court of Westfield Mall (it was the closest to my hotel and I just wanted a quick bite, and didn’t feel like eating at a fancy restaurant by myself) and was back in my room 7:30 p.m.

I got my stuff ready for the morning, called J for a quick check-in and then turned the lights off by 9 p.m. 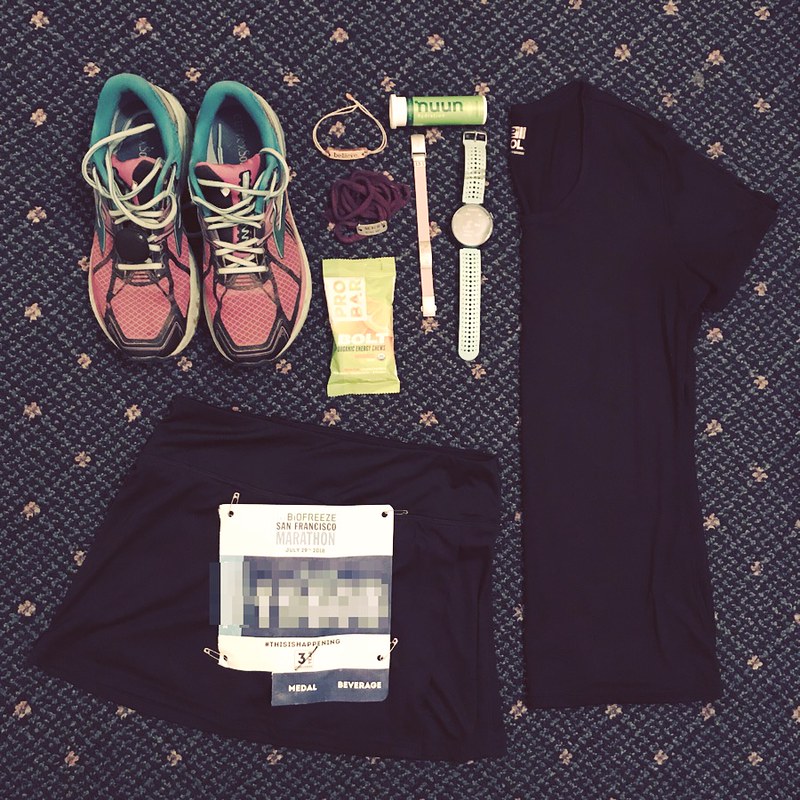 My alarm was set for 5 a.m., but of course I had already been awake a few times. I can never really sleep well before a race, no idea why! I got dressed, had a protein bar and some water and made my way over to the Embarcadero start line at 5:40 a.m.. Lots of people were out and about already, after all, over 27,000 runners were signed up for the event this year. 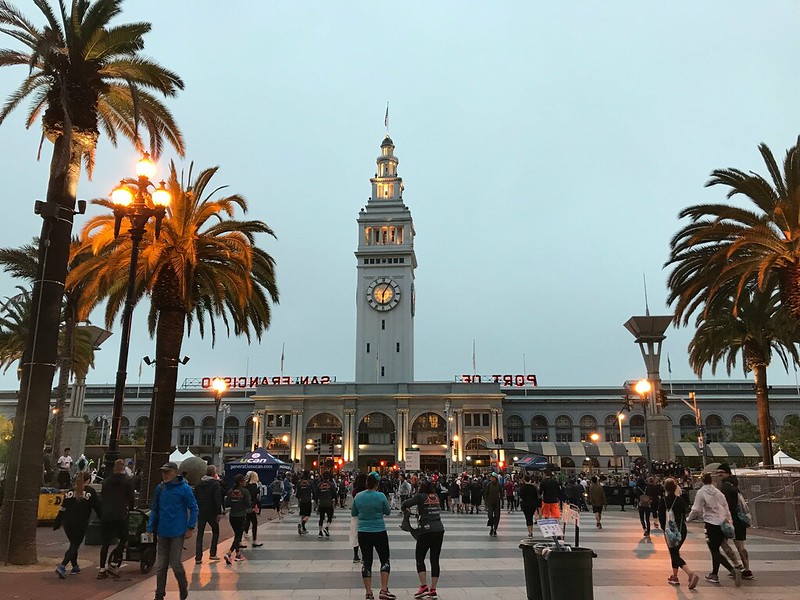 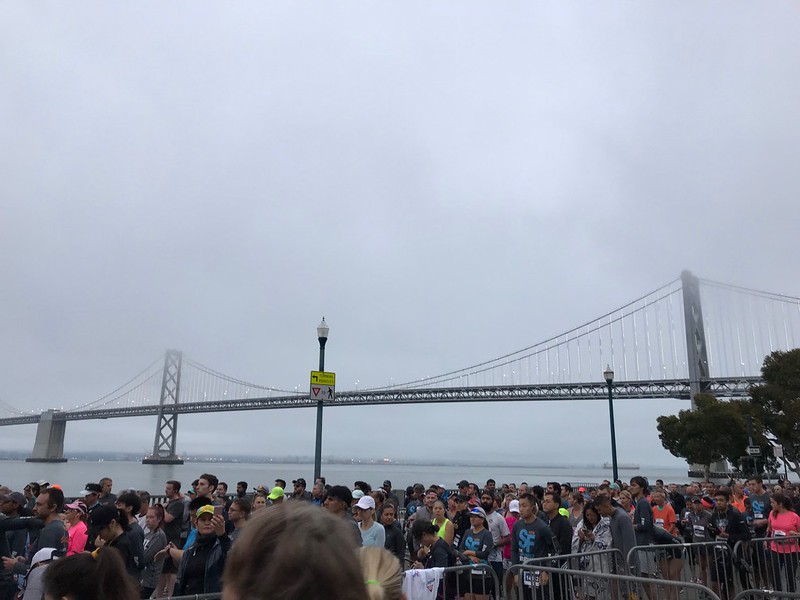 I dropped off my bag off at gear check, got in line for the port-a-potties, as I always do, then I warmed up a bit and made my way to my corral. And then I had to pee again. I chalked it up to “phantom bathroom urges” (don’t we all have them before a race?) and just hoped that it would go away. 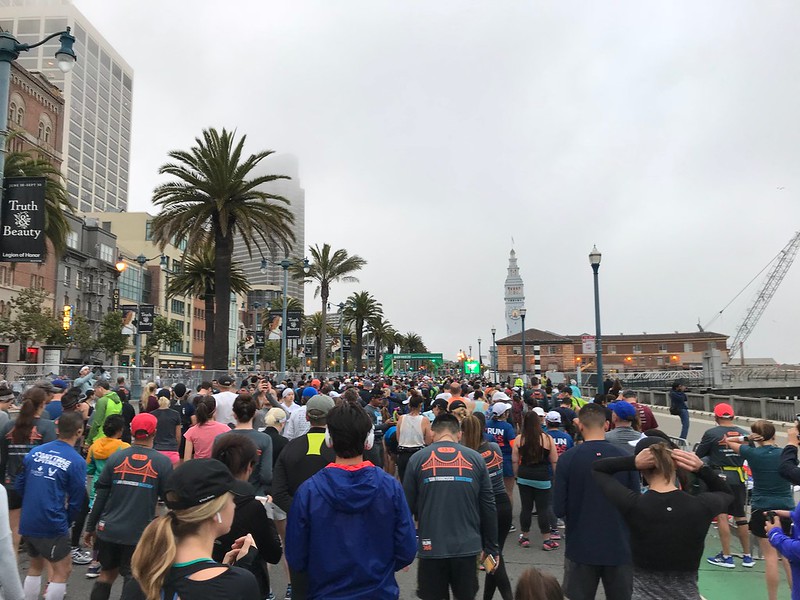 I had a pretty good start and the crowd dispersed much faster this year, which was great. The first 5 miles were the ‘easy’ part of the course because they were mostly flat except for one relatively short hill in mile 3 and even though I was not quite hitting my goal pace, I was moving fairly well and tried to focus on that.

I was a little bit frustrated with the pacer though. I had planned to try and stay with a pacer as a new race strategy, but the 2:00-hour pacer was a joke (sorry). I had started in front of the pacer and even though I was about 10 seconds-per-mile slow, I never saw him during the first 5 miles. Then in mile 5, all of a sudden, he passed me, and FAST. I probably should mention that mile 5 was also where serious inclines began. I mean, WTactualF?

I don’t want to sound ungrateful. I appreciate the runners who sign up to be pacers and put their own goals and ambitions aside to support fellow runners during a race, but if you commit to being a pacer, then, for the love of all things sweaty, run that pace. Don’t run slow for 5+ miles and then speed up disproportionally. The people that are looking to you to PR will not be able to keep up with such fluctuating paces. Well, at least I couldn’t. Not on an incline.

So, I let the pacer go and focused on myself and tried focus on the hills in front of me. There was a fairly rapid decline for about a mile after we passed the Golden Gate Bridge between mile 7 and 8, which is where I hit my fastest pace, and then there were some rolling hills left until the finish line. 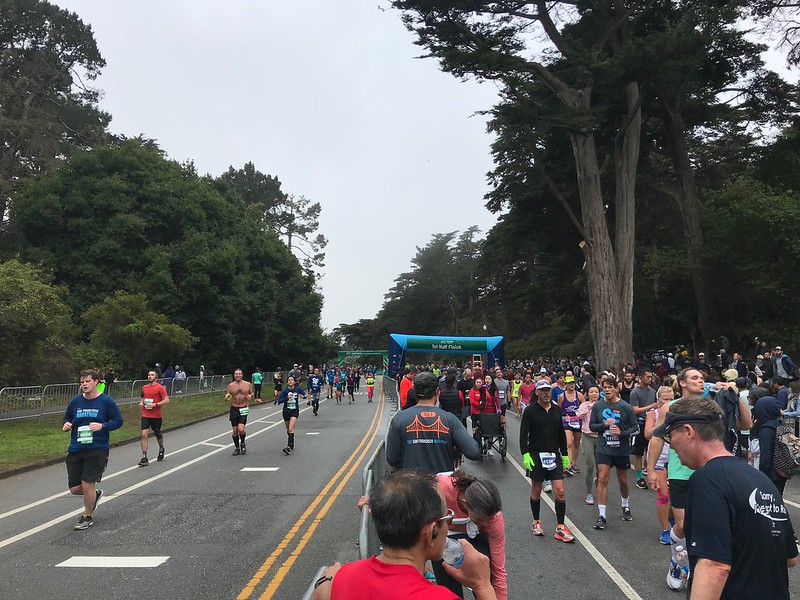 I remember feeling really good throughout the race, but was still happy to see the finish line. There were a lot of people out cheering on the runners and even though I had contemplated at every water station to use the bathroom (yes, I ran the whole race thinking I needed to pee), I am glad I didn’t (and once I crossed the finish line, the urge was gone. Go figure!).

Sadly, I didn’t reach my A goal (still no sub-2 for me – womp!), but I was really happy with my finish time, because one huge success this year was that I didn’t die on the hills. I ran all of them, something I wasn’t able to do last year! On top of that, I felt great. I mean, don’t get me wrong, I was glad that I was done, but I physically felt really good and my legs weren’t shaking or hurting.

I also shaved almost 5 minutes off my previous course PR from last year and finished at 2:05:03. My Garmin watch was scarily accurate this time as well. I ran a nearly perfect race line and the time was off by only 8 seconds. 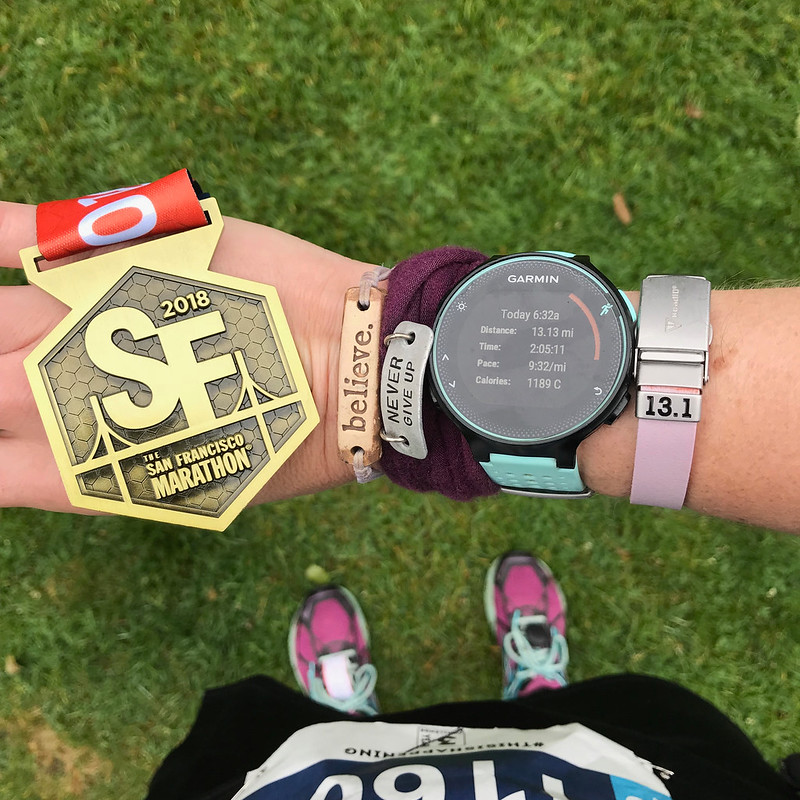 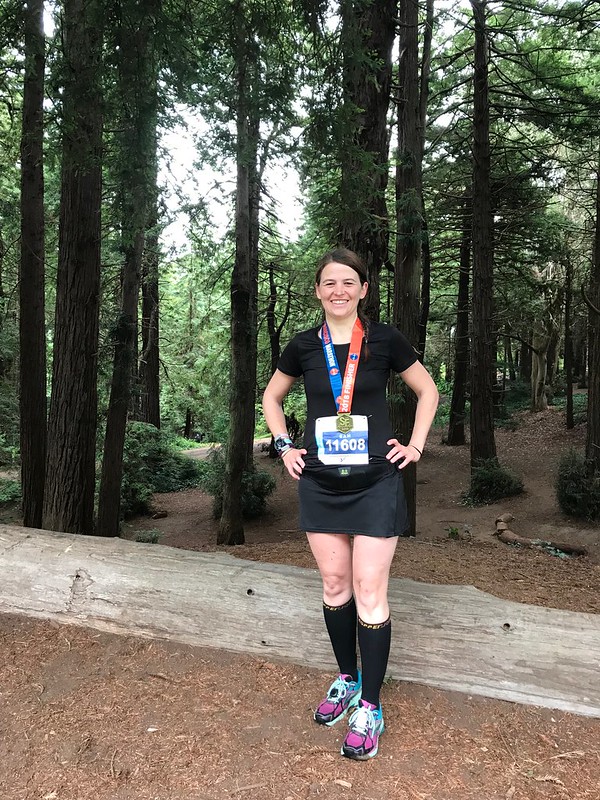 I was a bit bummed this year as the organizers had made some big, last-minute changes. The race start for the marathoners and 1st half marathoners was split up. The marathoners had started at 5:30 a.m. and the 1st half marathoners started at 6:30 a.m.
For me personally, it meant that the course was much less crowded right out of the corral and there was a lot less swerving around and passing of people involved this time. For friends that had planned to run together but were signed up for different distances, this might have been a huge bummer.

The other big change was that the 1st half marathon was re-routed and we didn’t run over the Golden Gate Bridge anymore. That was a big disappointment and they literally announced this change a couple of weeks before the race. There was the option to upgrade to the full marathon (which was still going over the bridge – but I mean, who can just sign up for the full marathon if they trained for a half?) or defer your race entry, but I still think that was a shitty move on such short notice. In the end, it wasn’t a deal-breaker for me (since I had the experience of running the bridge last year), but I wish they had announced this earlier.

Still, you really can’t beat the race course through this awesome city. The 1st half marathon took us from Embarcadero along the piers to Fisherman’s Wharf, through Fort Mason and the Marina, along Crissy Field, under the Golden Gate Bridge, and through the Presidio and Golden Gate Park, and I would run this race again anytime. 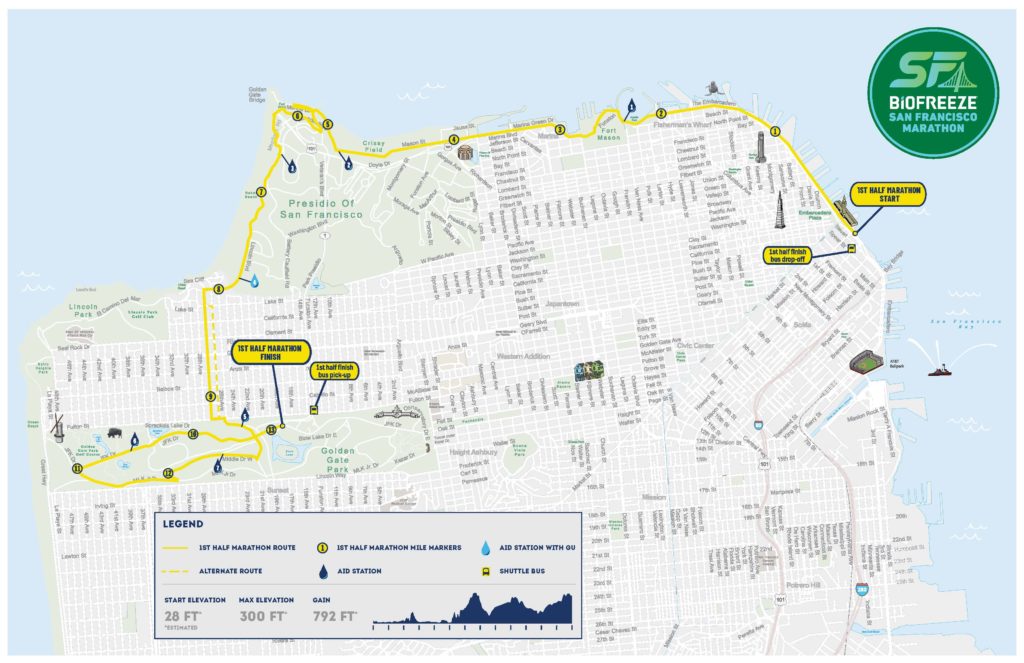 I collected my medal, some snacks and – wrapped in my race blanket (it’s amazing how fast you cool down and start shivering after a race, or is it just me?) – made my way over to the bus shuttles that took us back to the Embarcadero marathon (and 2nd half marathon) finish line and to the race festival. 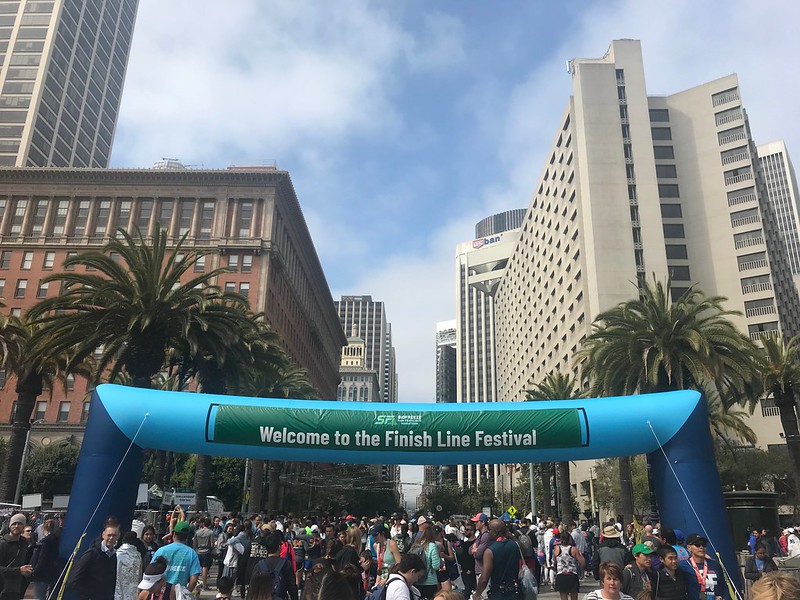 I walked around a little bit, got my finisher beer, and took some more pictures. I had time to go back to the hotel, take a shower, and get some brunch at Mo’z Cafe before catching BART back to Richmond and Amtrak back to Sacramento. 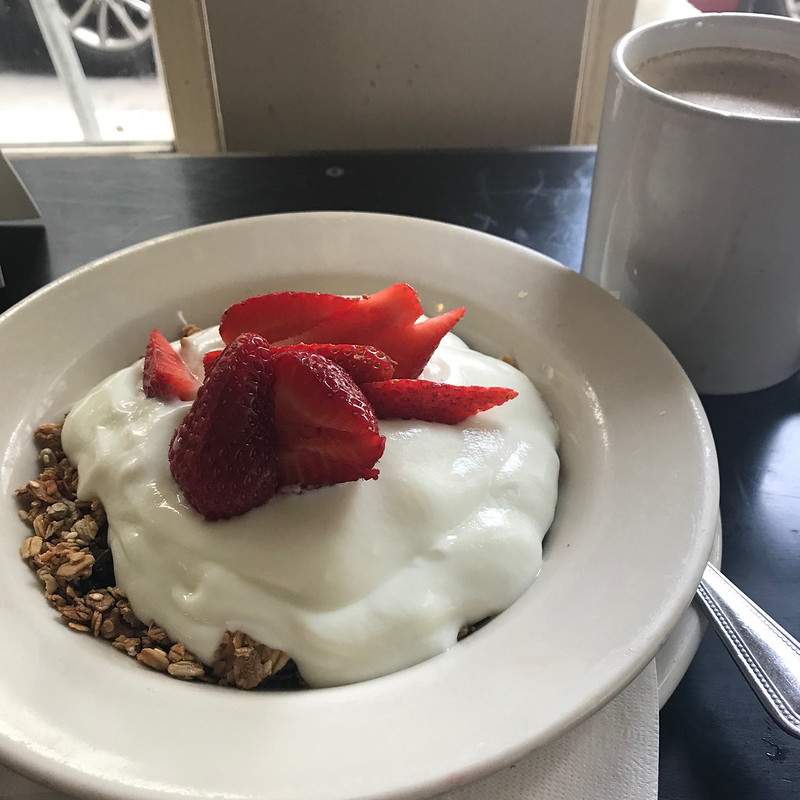 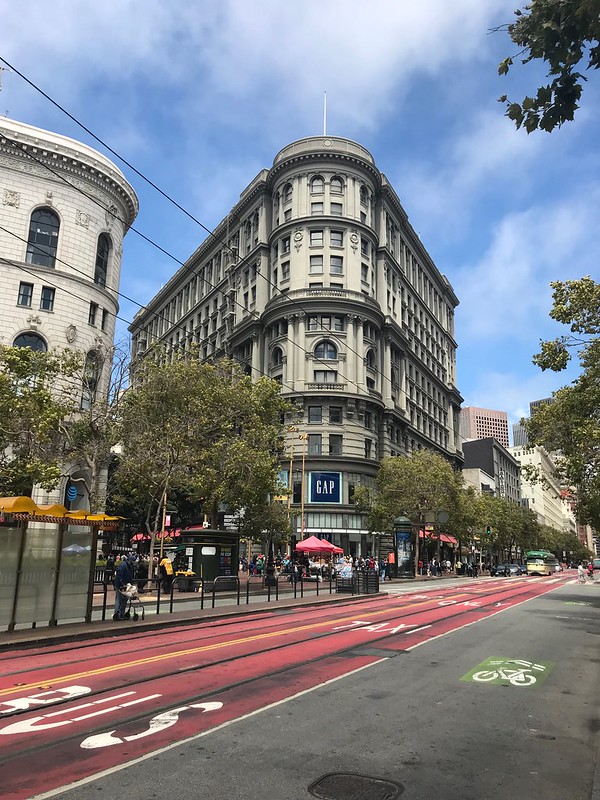 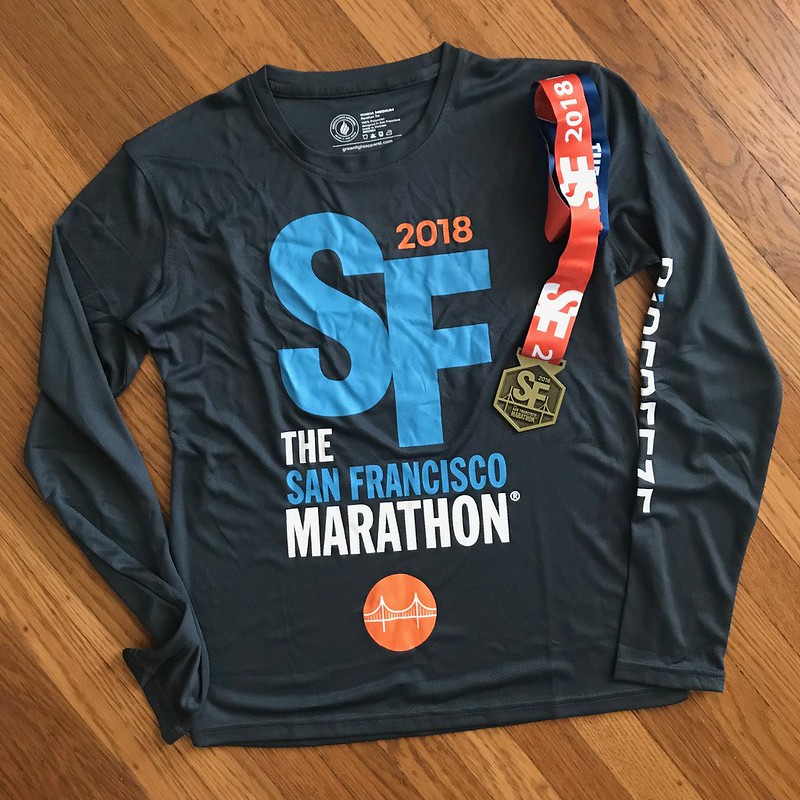 I really had a fantastic weekend and wouldn’t mind doing this again next year!

Have you been to San Francisco? Wanna join me next year?