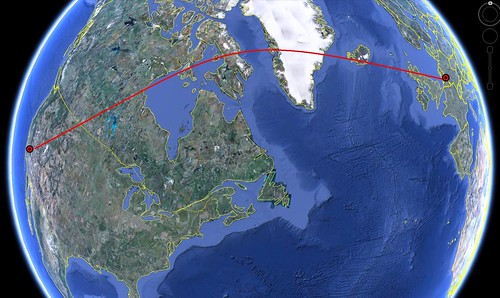 In some ways, I have not moved around much in my life at all, in other ways, I’ve made a bigger move than a lot of other people will ever make, when I moved to a foreign country to live with the man I love.

Grevenbroich, Germany. I was born and raised in a small city in the (very!) Western part of Germany. I  wrote all about my hometown here. We moved two times within the city until my parents bought their house in which I lived from age 10 until I was finished with college.

Davis, CA In my final year at university, I decided that it was time to apply for a semester abroad. It was a “now, or never”-type of situation and I knew that if I didn’t do the semester abroad, my dream of living abroad (for a while) would never happen. Boy, was I in for a surprise!

Grevenbroich, Germany I moved back to my parents’ house after my exchange semester until I finished college.

Davis, CA After I finished my degree in Germany, I moved back to California to look for an internship in order to live with J and feel out our relationship. I was lucky to find an internship and apply for a 12-month visa.

Sacramento, CA Half-way through my internship, after J finished school, we decided to move to Sacramento to shorten my commute. I ended up staying at my internship for 18-month (which was the maximum time allowed on the visa that I was on) and when a conversion into a work visa didn’t work out, I had to leave and go back to Germany once again.

Grevenbroich, Germany I lived at my parents’ house again for about a year, in which J and I got married and filed for an immigration visa.

Westwood, CA J had moved down to Los Angeles while I was in Germany waiting for my paperwork and I returned to our new home in Westwood 10 months after our official wedding date. We had a lovely one-bedroom apartment in the vicinity of UCLA and – to be honest – I still miss it. A lot. If I had been able to find a job in LA, I think we would still be down there, but a few months after my return to the US, I accepted a full-time position back in Northern California.

Ventura, CA – We moved to Ventura – where J is from – for a couple of months as an interim solution when J’s band fell apart. I commuted to Sacramento during the week for a few months and it was nice to have the best of both worlds – my great job in Sacramento and a lovely apartment, 10-minute drive from the beach in Ventura.

Sacramento, CA Eventually we decided that we needed to be back where my work was, so we moved back to Sacramento once again.

Where have you lived?