It started off with a really f***ed up train ride to Kiel. A real odyssey.
None of the trains I was supposed to take was on time. One was canceled completely and considering that I had booked this really cheap ticket which meant that I was only allowed to take certain trains, I ended up taking none of them at all :) This is the Deutsche Bahn for you. Fortunately, it didn’t really matter for me as I wasn’t really pressed for time and it also didn’t really matter which trains I ended up taking, but it was a whole mess to figure out how to finally get to my destination. I was lucky, because there were quite a few people who were in the same boat and needed to get to Hamburg or even to Kiel with me… [funnily enough, this is the time in Germany when strangers start talking to each other and show solidarity]. There was this really nice older guy who was travelling back to the north with this secretary after attending a fair in Düsseldorf and he invited me and his secretary for a “Bratwurst mit Brötchen” at the Hanover train station while we were waiting for our connecting train ;)
The next part of the journey, we spent in the “BordBistro” since there were no seats available in the cabin and he and his secretary had some champagne to kill time. It was all really funny after a while :)
Then finally, being 2 hours late, we arrived in Kiel where I was picked up by my friend Anke.

The weekend was awesome. Blue skies, sun and temperatures around 0 degrees. What a perfect winter.
This is where Anke lives. Heikendorf is on the other side of the Kieler Förde [across from Kiel] and she lives just down the street from the water front. It’s beautiful. 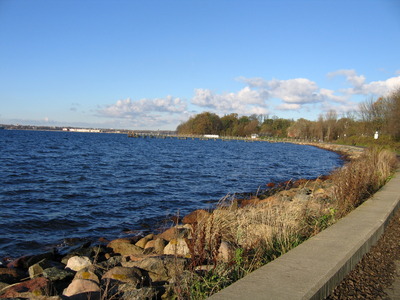 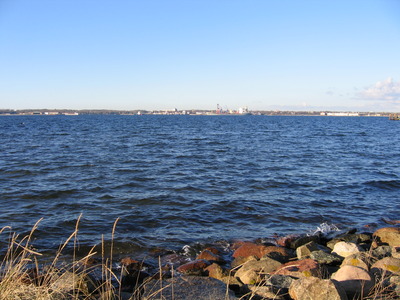 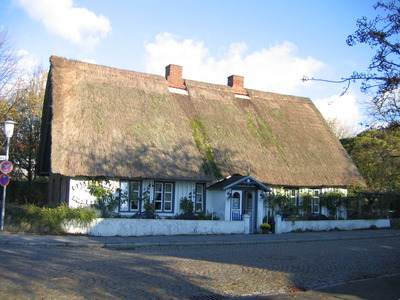 On Friday, Anke had to work, so I took a long walk around the town and then took the bus to downtown Kiel in the afternoon. I strolled around for a while, checked out the shopping mall and then met with Anke at 5 p.m. at the train station. We went shopping for a little bit and then spent a cozy evening at home. We cooked some yummy dinner and caught up on the latest news.

The next day, Anke’s friend Anja came to visit from Hamburg. We had some tea and then spent the whole day outside because of the beautiful weather. We took a long walk to Laboe, which is about an 1,5 hour-walk up north along the waterfront. We stopped for some coffee and pie at a very cute little Spanish café right on the water. 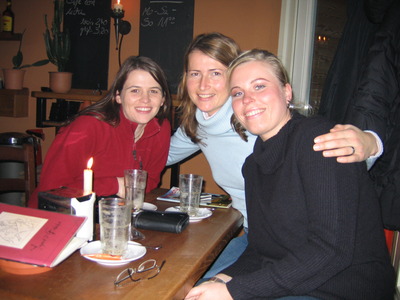 It was a really cozy place and we sat there for a quite a while and enjoyed the view. It started to get dark by 4:30 p.m. and the sunset was beautiful. 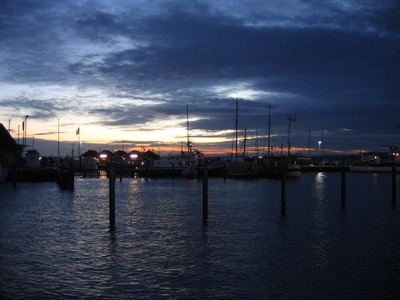 We had another “Glühwein” and decided to take the bus back to Heikendorf as it started to get really dark and cold outside. We did some grocery shopping on the way home and then made pizza for dinner and had a fun girls’ night at home [with more tea].

On Sunday, we went for a drive to Kiel and explored the city some more. We went along the promenade and also took a look at the nicer neighborhoods in Kiel with their nice big mansions. In the afternoon, Micha -another one of Anke’s friends from Rostock- came over for some [more] tea and then we had the evening to ourselves. The weekend went by way too fast again – as always.

Anke dropped me off at the train station on her way to work yesterday and -fortunately- all the trains were on time. It really was a fun weekend and definitely some nice distraction from what’s going on in my head right now.