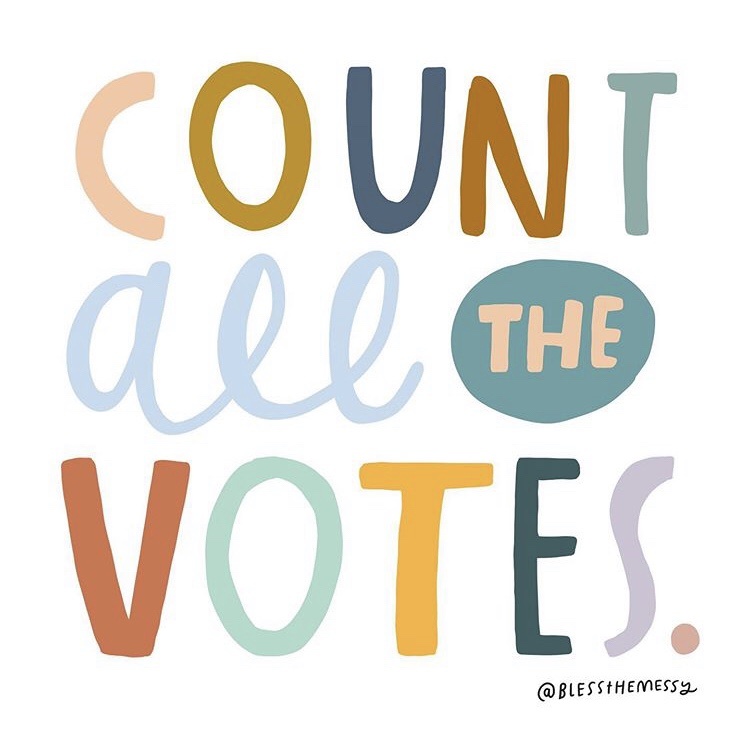 I didn’t know what I was going to write about today. When I outlined my NaBloPoMo posts, I purposefully left today’s date open. I expected that I would actually sit down today and write something about the election.

But the election is not decided yet and won’t be until every last vote has been counted. My mistake was that I allowed myself to have hope for a clear and overwhelming pointer in the right direction on election night. I know it wasn’t necessarily likely, but that didn’t make me hope any less.

But it’s 2020. We’re not allowed to have nice things. Why did I even for a second believe that this election could be an obvious repudiation of a racist, bigoted, misogynist man?

Well, excuse me, if I was optimistic that people  wouldn’t be so stupid to re-elect a man who has made more than 20,000 false or misleading claims during his first term in office, who has been gaslighting his followers again and again, who has all but erased our reputation in the world (by alienating allies and cozying up to dictators), who refused to denounce white supremacy and who has repeatedly encouraged violence.

On top of that, he disregards science and expert knowledge. He doesn’t read, he doesn’t listen, he doesn’t learn. He’s been in over his head since the beginning and he doesn’t want the job of the president, he just wants the power (and praise).

People keep asking me “why are you surprised?”. Well maybe because all those above mentioned things seem like pretty good arguments against re-electing this despicable man, and maybe because I still always believe that people are better than they actually are, goddamnit. There are 67,000,000+ Americans who took a good look at Trump and thought “yeah, I want four more years of that”. That’s what’s mind-boggling to me, that people even saw a choice.

Trump’s never been the president for all the American people. He’s only been president for his base. He’s never tried to reunite the country or reach across the aisle. Also, let’s not forget that this all started as a personal vendetta against Barack Obama. It’s pathetic what a petty, weak man he is.

And what strikes me the most, he monumentally failed and keeps failing to protect and lead during this pandemic, the worst public health crisis of our lifetime that resulted in 240K+ Coronavirus deaths so far and the highest daily new cases of the pandemic yet, and people don’t care. They congregate in groups, they don’t wear masks, and they feel smug. Just don’t let the virus catch you.

How people accept so many lost lives (many unnecessarily), the lack of COVID-relief for those who lost jobs, health insurance, and homes, and all the lies and misinformation about the severity of this virus, is beyond me. How can people STILL vote for him again? Hasn’t he done enough damage? I guess, after all, (white) people really haven’t suffered enough and it’s also abundantly clear that they really don’t care about their fellow men. (Don’t even get me started on the single-issue voters. This is the epitome of privilege. You’re dead to me.)

Donald Trump once said he could “stand in the middle of Fifth Avenue and shoot somebody and he “wouldn’t lose any voters.” We now know he can also preside over the deaths of 240,000+ Americans and not lose any voters. Even if he loses, that’s a profound indictment on America.

However disappointed I am by how many people have still voted for Trump after *everything*, that in fact, more people voted for him than in 2016, Joe Biden has a solid lead in the popular vote (as had Hillary Clinton) and it’s just incredible that regardless, we still don’t know who the president is going to be. One thing is clear: the very outdated Electoral College has to go. It’s not right that someone can become president when (s)he’s not elected by the majority of the people. I wonder when this will finally be taken on by the legislature. This has been talked about for decades and boggles the mind of every other democratic nation.

We should just take a moment at some point tonight and reflect on just how fucking stupid it is that we know who is going to get the most votes, but we don’t know who will be President

I know there is hope that Biden’s campaign strategy pays off and he’ll be elected president.  It’s not over until it’s over. Every damn vote has to be counted.

But even if Biden wins, I am beyond disappointed in you, America. Maybe not surprised, but disappointed nonetheless. We have a lot of work to do.