Yeah, it was about time that I wrote another chapter of my upcoming book “The Never-Ending Story of the U.S. Postal Service and me”, wasn’t it?  (← Just kidding about the book deal, but I seriously have enough material to write a book. But then again, who wants to read about the failings of the Postal Service.)

You know, I love the postal service, I love the idea of the postal service, I really do. I mean, how awesome is it that you hand them a piece of paper in an envelope and they transport it half way around the world? Pretty amazing, am I right?  I’ve been a good customer. I’ve been sending tons of letters for years. I make sure they stay in business (well, not single-handedly, but you know what I mean) and I appreciate their profession. However, repeatedly, they’ve been treating me as a (both sending and receiving) customer and my mail like shit and I am really – slowly-but-surely – getting so tired of it.

I’m almost ( nah, NOT REALLY!) getting used to the fact that I receive a small percentage of my Christmas cards returned every year, a sticker on it  claiming that the card couldn’t be delivered because of a wrong address (which, in all honesty, is NEVER actually the case, because I check back with my peeps). I get it, sometimes a letter gets lost, sometimes it gets missorted or simply overlooked. I know how it goes, I worked for the postal service in college.

But, I really had more than my fair share of BAD experiences with the Postal Service (and have blogged about it before) and  I am really, really getting pissed off by their audacity lately.

I had been (more or less) patiently waiting for my Mom’s Christmas package. She had sent it of on December, 1st, but I understand that Christmas is a busy time and that it can take a bit longer for things to be delivered when there is such a huge volume of mail. I am not complaining about that.

What I am complaining about is the nerve of the Postal Service to return a package WRAPPING (not even the actual package!) with a note on it that says a) that the package couldn’t be delivered because there is “no such street” (when my address on it is, in fact, CORRECT!) and b) a note that apologizes for the package being damaged (when the actual package + contents were not even returned).

I mean, WHAT THE HELL??? Who returns just an empty wrapping? It’s like a big slap in the face and I don’t appreciate it. 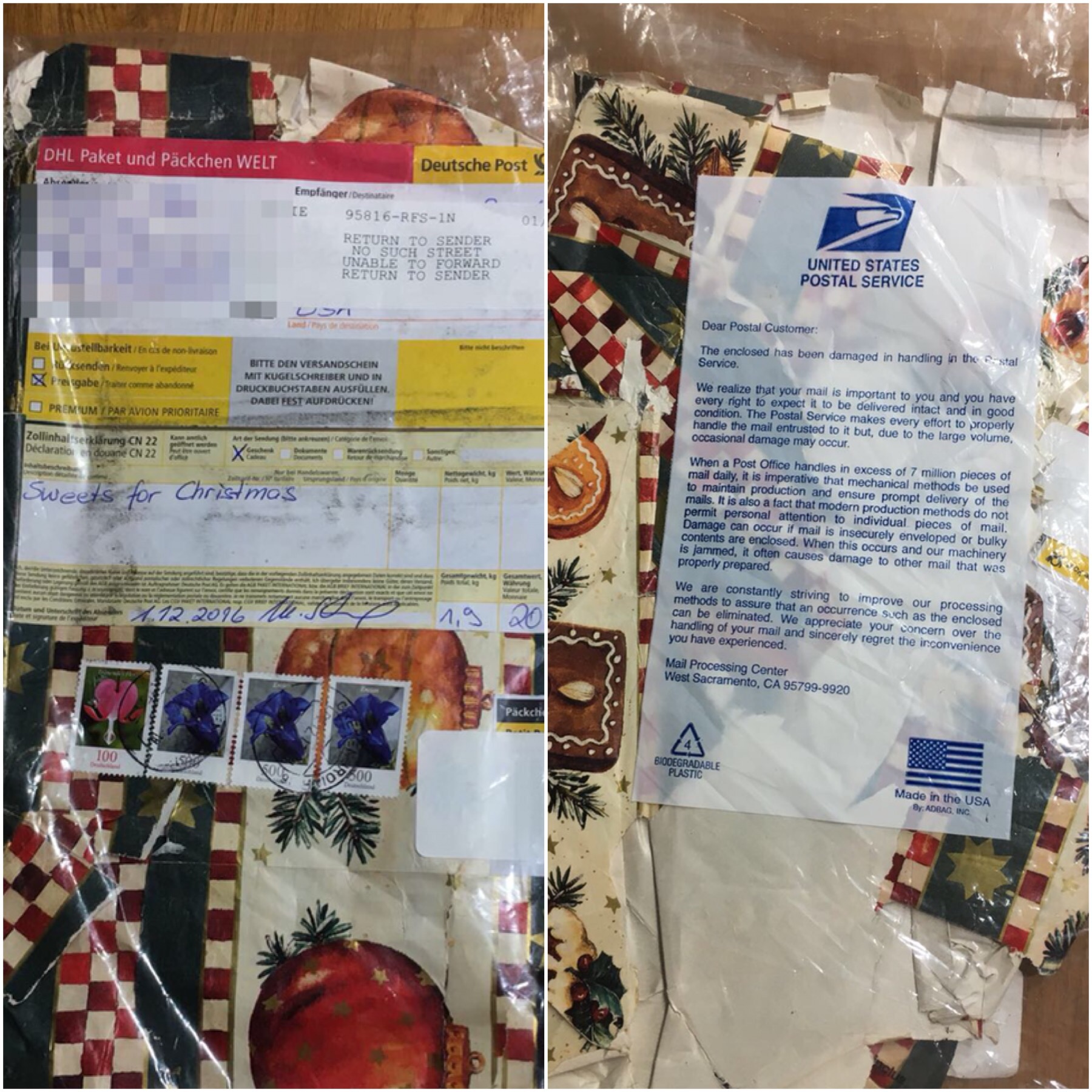 If they determined that there is “no such street” in Sacramento, does that mean it made it to the Sacramento post office and they were incapable of figuring out that there is indeed a street with that name in Sacramento? Are there no people with a little bit of common sense working for USPS?

To be completely honest, I discovered that my Mom used my “old” zip code, but with our new (correct) street address. You’d think, since we didn’t move out of town (in fact, only a mile away from our old apartment), they would be able to figure this little mystery out and simply verify the zip code, instead of trashing the package (or stealing the goodies) and sending the wrapping paper all the way back to Germany!

I mean, isn’t it their duty to at least cross-check the address + zip code (a simple Google maps search will do!) before they just declare a street “nonexistent”? In fact, I googled that and it says that this is what should happen anyway. I acknowledge that this might take some time and delay a package further, but clearly, nobody has even tried here. “Unable to forward” is simply INCORRECT.

To be frank, I am beyond FURIOUS.  And I am going to the post office this weekend. I already feel sorry for the person who has to deal with me.