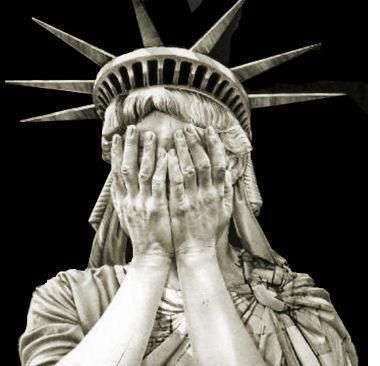 I wish I could say that I went to sleep last night and woke up to a historic moment in American history. That finally this gruesome, infuriating election cycle was over and we elected our first female president.

But that didn’t happen. I didn’t sleep and I didn’t wake up to good news. I was glued to the TV last night when the election results trickled in. I started feeling physically sick. I couldn’t go to sleep. I stayed up all night and witnessed what nobody thought possible – Trump winning in pretty much all the swing states and clinching the election. I cried over an election that should have never happened. I cried that a man that openly promoted hate, racism, bigotry, misogyny, and xenophobia during his campaign actually got away with all of it and was elected president. I cried even more  about the fact that people are either full of hate and actually support what this man stands for, or indifferent to the consequences of their vote just because they wanted to give the middle-finger to the establishment. I honestly don’t know what terrifies me more.

Then the anger set it. It grew like a pit in my stomach and I am afraid it will be there for a long time.

Hillary Clinton was never my first choice for president, not by a long shot, but in the end, I was proud to support her. As a woman, I can only imagine the hoops that she had to jump through to even get the foot in the door of a largely ‘old-white-men’s-club’. And in the end, she still couldn’t overcome the double standards that have been applied to her. She was scrutinized for every misplaced word, called crooked and corrupt, while Trump went on spewing hate and (proven) lies and people didn’t blink an eye. What is wrong with this picture?

The hardest pill to swallow: Hillary won the popular vote. More people voted for her than for this pathetic excuse of a man and she still had to concede (and oh-so-graciously she did). I don’t think I could have mustered her grace and composure (or Obama’s, for that matter, who must have felt like he was slapped in the face hard). It’s heartbreaking and frankly unfair.

But there is another unfairness to this: 47% of eligible Americans decided that it wasn’t worth their time to cast their vote. This means that less than 1/4 of the population decided on the fate of this country. I know that voter turnout has always been poor, but I honestly don’t understand why people here seem to care so very little.

This is a sad day for America. This is not the America I signed up for when I became a citizen. During her concession speech, Hillary said, “This loss hurts, but please never stop believing that fighting for what’s right is worth it. It’s always worth it.”

I agree, we need to fight for what is right. The alienation and oppression of women, minorities and immigrants is not. This is not what the United States stand for. There is so much I want to say, but I feel like I can’t string a coherent argument together. My thoughts are honestly all over the place.

I just want to say this: I know many people are hurting right now. To my black friends, my Latino friends, my LGBTQIA friends, all the women in my life and everyone I know who – like me – is terrified of what this presidency could mean not just for us, but for the world: I feel your pain and fear. I am afraid of what we might have to endure before it gets better again (and trust me, I am fully aware that I still am privileged, even though I myself belong to two groups that Trump has repeatedly belittled and offended. But I know that for other minorities things will probably be far worse.) We need to listen to each other, unite in our shared beliefs, and talk about our differences to move forward into a better future.

We might not be able to control much of what happens in Washington now, but we can control what is in our hearts. I believe in love, kindness, and compassion. I believe that most people are inherently good and we have to make sure that we bring that out in everyone around us. We need to stand together and work together to turn this country around again. We can’t let hate win.