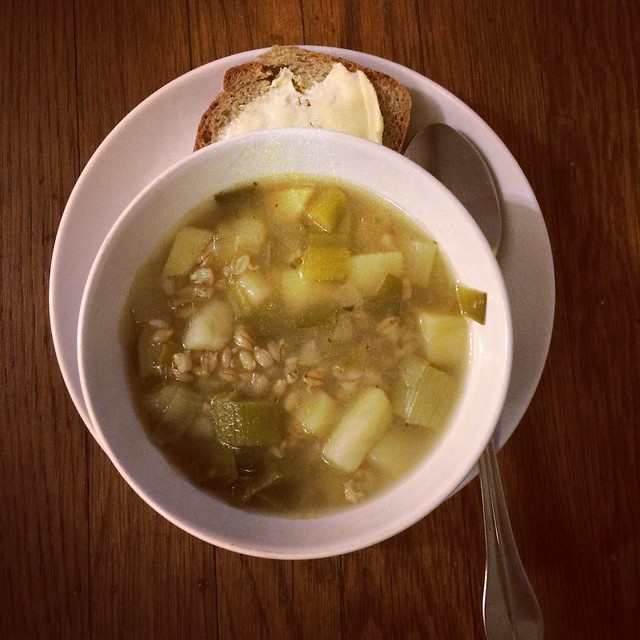 Mmh. November is finally here, which pretty much means switching from warm fall temperatures to the first nights waking up at 2 AM and shivering on the way to the thermostat that slaps a chilly 64°F in your face — brrrr! — and for the first time this season, you turn on the heater in your apartment. BUT: it also means, time for stews! Green been, vegetable, lentil and barley…. all the good stuff!

Here’s what you need for this hearty soup:

Combine 48 oz of water, barley, salt and seasoning sauce (and sausage) to a boil and cook for about 20-30 minutes. Then add leak and potatoes and boil for another 25 minutes. The soup is done when the potatoes are soft and the barley has doubled in size and is soft and chewy. It goes well with a slice of fresh bread!

So, regarding the barley. It is one of those nutritious grains that doesn’t get enough spotlight. I personally have only eaten it in form of a barley stew, but I know that there are ways to prepare it as a substitute for rice in other dishes. You typically find pearl barley (when you buy at the supermarket), but when you go to a store that sells stuff in bulk (like the Co-op), you will also find hulled barley. Hulled barley has had the tough, inedible outermost hull removed but still retains its bran and endosperm layer. It is more nutritious and high in fiber, antioxidants, vitamins and minerals. Hulled barley is considered a whole grain, therefore it’s a little chewier (which I like!) than pearl barley  and takes a bit longer to took, but it’s absolutely worth the extra effort. You should give it a try!