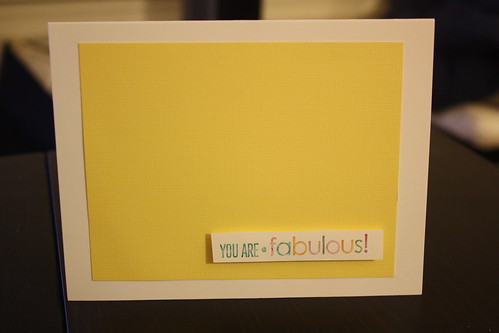 I received a call on Sunday from one of our long-distance friends in Germany (originally his parents were friends of J’s family, but he and his wife then quickly also became friends of ours). We hadn’t really been in touch for a while, which is to say that I had been in touch by writing cards and emails to them for the usual occasions – Christmas, birthdays, etc. – but never hearing back from them.
He apologized profusely on the phone, saying that they were just really bad in responding, but that they’ve been thinking about us a lot and that he really wants to make an effort to call more often.

It was a nice surprise.

You know, some people shy away from getting in touch with people that they haven’t talked to in a while. Often this happens not because of not wanting to get in touch, but because life gets in the way and they forget and they promise themselves they’ll do it tomorrow and then won’t, because they feel bad because so much time has passed… yaddah, yaddah, yaddah. The same old story.

But you know what? In 99% of the cases, people will be thrilled and positively surprised if you take the initiative and rekindle the relationship, no matter how long it has been. I’ve never seen somebody reject a phone call or a hand-written card from somebody that they thought they’d lost touch with.

I’m obviously more of a writer than a phone person, hence another stack of hand-crafted cards (one of which you can see at the top of this post) that I made last weekend. So naturally, you’re more likely to be swamped by cards and emails from me, than get a phone call (although I do make regular exceptions for certain people!).

In the end, it doesn’t really matter how you get and keep in touch, as long as you do, in fact, keep in touch!

So tell me, who should you get in touch with today?