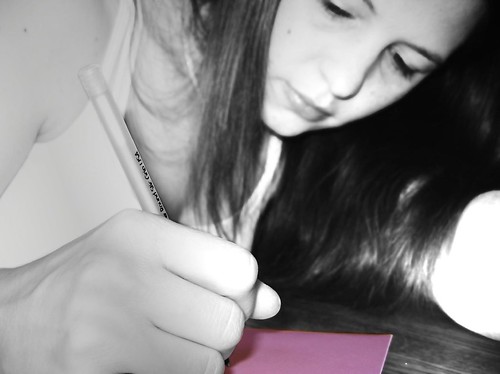 Yesterday I received a letter from my dear friend Cathy and I once again realized: Letters make my day.

Email and phone is great, but there is nothing more personal than a letter. I used to have so many penpals when I was a teenager and I still write with Ã‚Â± 20 people on a more or less regular basis. It’s just like a special treat every day when there is a letter in the mailbox.

And you know, sometimes it doesn’t have to be a many pages-long letter. Sometimes, a simple card will do ;)
[I don’t know how to tell you that sending a little note to someone you care about can make their day, if you don’t see me “waving with the proverbial fence post” by now…;)]
Ha, don’t you love this literal translation from German?? The only phrase in English that I know is “to give a broad hint”, but I like the German phrase much better.

So, get moving, buy some cute cards and send them to someone you love… I sure will send some more cards out by the weekend, before they raise the postage in the US again. They just did that like a year ago and now it’s going up another two cents starting Monday.

I was “interviewed” once again and I apologize, Antje, that it has taken me a while to put the answers up, but here they are :)

1. What is your first clear memory from your childhood?

This is a very difficult question to answer, not so much because I don’t remember anything from my childhood [I do!], but for the fact that it is hard to tell what really is your “own” memory and what do you remember because your parents or grandparents have told you about it?!

I do remember the setup of my parents’ first apartment where they lived with me and my sister until the age of 3 or 4 I think. I would say that this is one of my early childhood memories, because I don’t recall any pictures that would show the setup of the apartment or something like that. We lived on the third floor and I also remember that an old lady lived in the house next to us and my sister and I would be at the window and wave at her and she would wave back.
I don’t remember ever meeting her in person, but to my sister and I she always was the “Winke-Oma” [= waving grandma] :)

2. Where do you see yourself in 5 years from now in terms of career, family, and place to live?

… explains my absence from the blogging world in the last couple of days. I’ve missed some days on Flickr, too, so you can tell I really didn’t feel like spending any time on the WWW, writing my blog or taking pictures [ = I really felt exhausted].
Susi thought that I had been shopping and caught the cold from the overly-air-conditioned stores. Logical thinking, but nope, I didn’t even go shopping [which would have at least made me feel better about being sick ;)].

Thank God, I am feeling much better today and hence the update.

I don’t want to bore you with my daily update from last week. I slept a lot or vegetated on the couch watching stupid stuff on TV. It did me good though ;)
On Thursday, after doing the laundry, I went to the studio with the guys, because we had planned to get some recording done. The camcorder was set up and they were warming up, when I noticed that J’s voice somehow sounded different that day. Now it’ll get technical: What Generation is not about the sound equipment, but about the voice and the instrument – therefore, they don’t own a bunch of technical equipment. J doesn’t sing through a PA system, but also through a reverb [guitar] amplifier for a cleaner sound. They own two different amplifiers and I realized last week that even two different amplifiers create a different sound and we started talking about the pros and cons of each amplifier.

Then it was dinner time and since we were really hungry, Aaron suggested to try out a Japanese BBQ place, Ã¢â‚¬Å“Gyu-KakuÃ¢â‚¬Å“. It was a really cool restaurant with a nice ambiance. If have to mention that West Los Angeles has THE best selection of restaurants I have ever seen. You’ll find any kind of food and national specialties here.
The Japanese BBQ place is apparently also very popular with actors and actresses and some of them go there frequently. Unfortunately, we didn’t see anyone famous Thursday night ;) maybe next time.
The catch about the restaurant is that each table has its own imported Japanese BBQ brazier where you get to cook your own marinated meats, chicken, fish and vegetables.
Also, you’re totally encouraged to ‘stay a while’ and the waiters won’t get pushy if you stay longer than 1 hour ;) I guess this is just “normal” for most restaurants that are a little more upscale – as you can imagine, this is not a place to eat at every day.

On Friday, J and I went to the movies and saw “Spiderman 3”. I am not a fan of these kind of movies, but J really wanted to go and had ordered tickets a couple of days in advance, because the premiere was on Friday. Since we went to the matinee at 4 pm, the line was not too long. We got there around 3:15 p.m. to get good seats, because reserving seats is not common practice at movie theaters in the US. However, it was not problem to get the best seats – in the middle and in the back – because most Americans go for the seats in the front rows. This is a phenomenon and I haven’t figured out why that is. In Germany, everybody would go for the seats in the back … anyways, I enjoyed the movie – I like Kirsten Dunst – and we had a good time.

The weekend was kind of mellow… like I said, I slept a lot, made some phone calls and relaxed :)

Last weekend, UCLA hosted the Los Angeles Times Festival of Books. Of course, I had to go.

J’s Mom came down to LA on Sunday early in the morning, we went over on Campus to reserve tickets for some of the panel discussions and then started the day with a hearty breakfast at the DC [= Dining Center]. We roamed around a little while before we could attend the first of the two sessions that we had signed up for – “Land and Sea: The Health of the Planet”. It was very interesting discussion about environmental issues and what each of us can do to act more responsible on a daily basis. The second session’s title was “Iraq: What’s next?” and the panel was made up by well-known American authors and journalists. This panel discussion was very popular and the whole lecture room was packed. As you can imagine from the title, the discussion got very political and sitting amongst all the Anti-Bush people in this room, you could almost wonder how this guy could have been elected in the first place – but wait, there are people out there who still support the government, even though current numbers are dwindling.

All over campus, there were hundreds of booths taken up by exhibitors, bookshops, publishing companies and the like. A lot of the authors and journalists had book signings at certain designated areas and overall it was just a really cool event. Unfortunately, I didn’t know any of the authors, otherwise I probably would have been more excited about the book signings, but it was still very cool. I do regret that I didn’t check out the book festival on Saturday already, as there were more interesting stage performances and panel discussion that would have been interesting to attend.

In the evening, when we got home and my feet burned like hell [I think after all, high-heels are just not made for walking – as comfortable as they initially might seem ;)], we ordered some pizza and watched “Blood Diamond”. It was a very good movie – last but not least because of Leonardo DiCaprio’s excellent acting skills :)

P.S. Happy 1st of May. I know it comes a little late and since the 1st of May is not a holiday in the US, it wasn’t really a special day. I did think of all the may festivities in Germany though and I hope you had a great time :)