I want to write. Seriously. I have a lot to write about in the back of my head right now, but the thing is – most of it shouldn’t or is not intended to be out in the public of this blog yet – or at all. I know I am talking in riddles. Just forget about it and pretend to be satisfied with what I can give your right now. I am sure some things will find their way on this blog sooner or later ;)

First of all, I officially bake my own bread now. Sourdough, dark wholemeal bread – you name it. I can do it all. Remember that I took home some of the sourdough that Andreas had made from scratch? I kept it in the fridge for a week and then it was ready to be used for a new loaf of bread. Tuesday morning, while I was talking to my Dad on the phone, I kneaded the dough and since you have to do it for quite a while and it’s “hard labor”, my Dad jokingly asked at some point if I was running a marathon while talking to him on the phone ;)
Well, the hard work paid off. The bread was delicious and smelled so good. 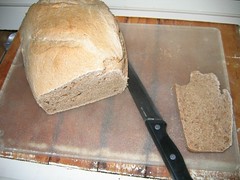 Two days later, I decided to try and bake my Mom’s dark German bread. It’s actually very easy to prepare – no kneading involved, just heavy stirring ;) – and although I wasn’t sure if I had bought all the right ingredients [I had to cheat a little bit, because not all ingredients were available], it turned out great. Does anybody want a slice? 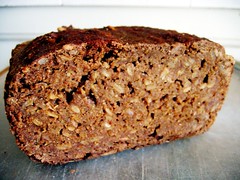 What else? Oh yeah, we have a new roommate since last Thursday. J’s friend Aaron moved in with us after the break up with his girlfriend and finding new tenants for their old place. It’s going to be a temporary solution, but he might be staying here for a couple of weeks. I really think it’s no big deal – although J and I had promised each other that we would never live with roommates again after getting married. Oh well, some situations require radical measures. This is such a situation.
We moved all his stuff on Thursday. Some stuff was taken into our apartment, some stuff was left on the street for people to take. That’s how things are done in LA ;)

We had a fun weekend. The three of us spent St. Patrick’s Day at the studio. J and Aaron had been there pretty much the whole day already [while I was doing the laundry] and I joined them later. We got some Take out Thai food for dinner and hung out at the studio [which included a private concert for me :) Oh, these stories will be worth so much once the band will make it *g*].
We also met a drummer from down the hall – very nice guy, maybe a potential drummer for the band? I don’t know yet, but we’ll see.

Today we went out for breakfast at CafÃƒÂ© 50’s, a diner in Santa Monica – it was my belated birthday breakfast. I don’t recall if I mentioned that before, but CafÃƒÂ© 50’s has a Reward program that you can join for free. Every time you eat there, you earn a certain amount of points and when you have collected a certain number you’ll be rewarded with -let’s say – a free desert or something like that. Also, I receive discounts and special offers in the mail and for my birthday they sent me a coupon for a free entrÃƒÂ©e. Well, who wouldn’t want to go for that?
Yeah, the breakfast prepared me real well for an afternoon of talking on the phone [it was great to talk to you, Kim *smooch*] and writing letters [three!]. I am so proud of myself :)

Yeah, and now I start rambling and I’d better let you go.