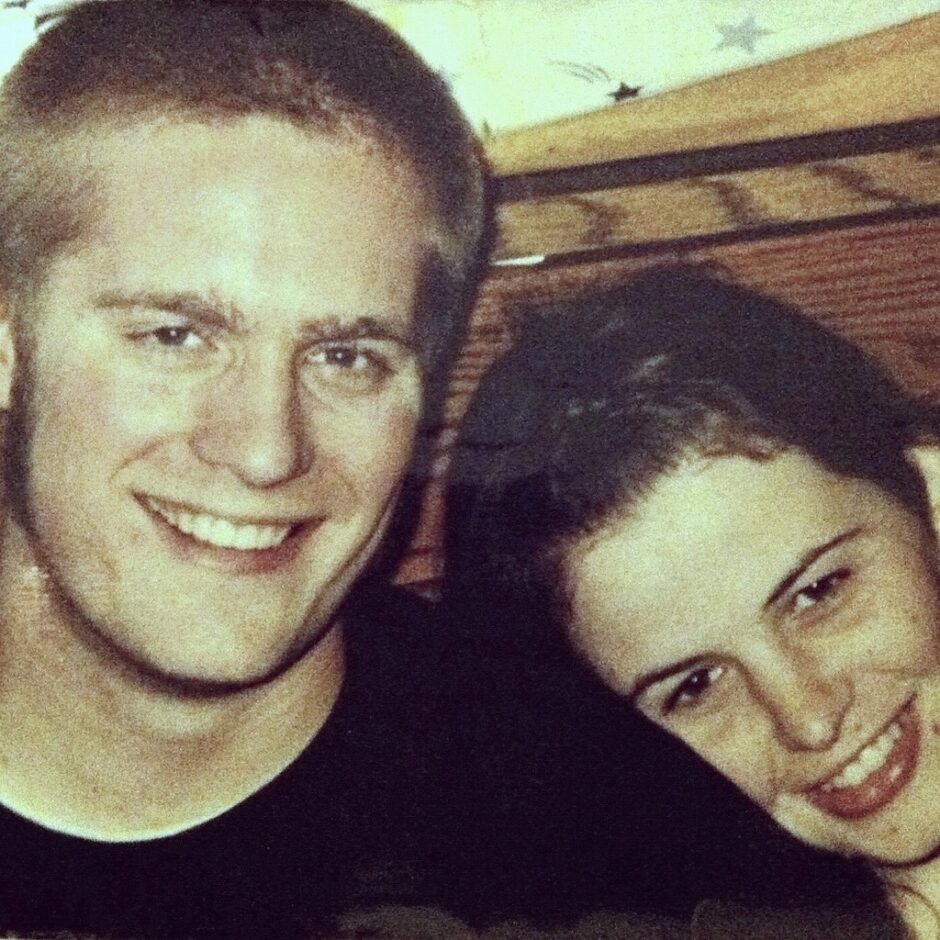 I just talked about my 20th California-versary a couple of weeks ago, and today I have to share another special day: the anniversary of the day when I met Jon.

We met right around three weeks after I arrived in the US. It would be a while until we became a couple, but I had no idea at that time that he would swoop me off my feet and that I would end up moving to the US permanently because of him. Well, the original plan was for him to move to Germany with me after finishing college (but that’s a story for another day).

Yesterday, we went back to the place where we met – the college where he had just started as a freshman and where I spent my exchange semester. Jon and I like to go back there. We have been back to the exact spot many, many times and it’s always a little magical – at least for me – to think that this is the place where we first crossed paths. Yes, right there on the left side of a roundabout on campus between his dorms, the main campus, and the rec hall. I know, isn’t it kind of crazy to remember the exact spot where you saw each other for the very first time? Well, actually this is the spot where Jon claims he saw ME (the most beautiful girl in the world — his words!) for the first time. I don’t actually remember locking eyes with him there or anything, but he followed me (and two other exchange students) to the rec hall and just started talking to us.

He was open, friendly, like most Americans. I was freakin’ excited when he introduced himself in German and burst out “OMG, you can speak German”, to which he replied, “Uhm no, I’ve overheard you speaking German, but this is actually all I can say. I’ll be starting my German classes next week”. I laughed. We’d definitely broken the ice.

I didn’t think much of it when he hung out with us for a while. It felt so normal to talk to him and I was honestly just excited to practice my English. Long story short: he spent the rest of the evening with us, showed up at my apartment the next day with a friend, and then left me “dazed and confused” when he whispered in my ear “I feel a connection. There is something between us.” I thought he was being cute and definitely had some butterflies in my stomach, but never in a million years would have expected things to play out the way they did.

Lots of people thought I was absolutely batshit crazy to get involved with a 19-year-old guy from the US. I probably was! We had no idea if this was going to work out, but we apparently both believed that this was somehow meant to be.

And I guess the proof is in the pudding because here we are: 20 years later.

We had some up and downs and hard times (like most couples), including a long-distance relationship for the better part of 3 years, and life hasn’t always been easy (is it for anybody?), but there has also been so much laughter and happiness and at the end of the day, I am glad Jon’s the person I get to snuggle up on the couch with.

View on Instagram |
5/5
We use cookies to ensure that we give you the best experience on our website. If you continue to use this site we will assume that you are happy with it.Ok