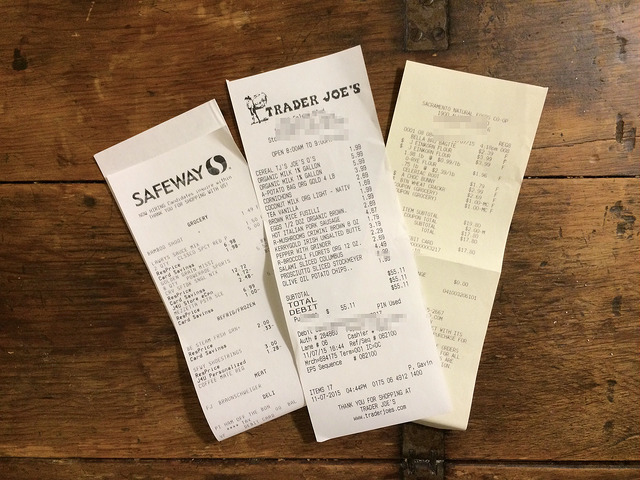 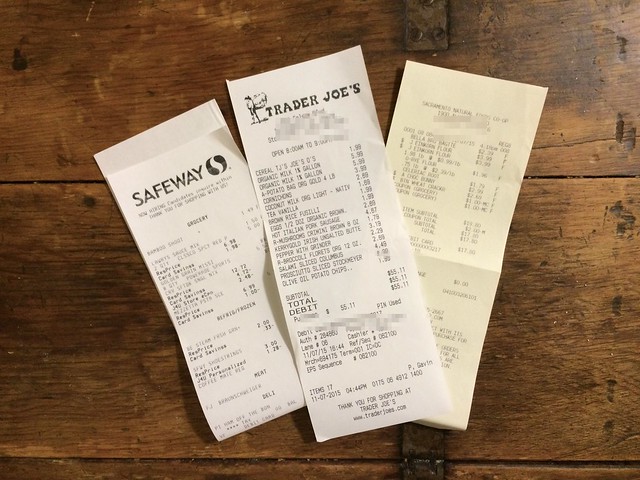 I consider us pretty frugal overall. Or maybe frugal is the wrong word, but definitely cost-conscious. We live in a one-bedroom apartment (hopefully not much longer though, I need a craft room! Ha!), we only own one car, I have a short commute to work and we don’t spend a ton of money on going out. Yes, we do have cable TV, but hardly ever go to the movies anymore or spend money on frivolous hobbies.

However, one of the things I’ve been trying to get a little under control is our grocery budget. As I said, we do live in California and food prices here are simply higher than in other areas (or so it seems), but I am always mind-boggled when I hear what other people’s grocery budget is.

I have to preface this post by saying that we do like to eat fresh and organic produce, meat (though not daily!), and that we consume a lot of dairy (milk, cheese, yogurt). It simply adds up and I am telling myself that I am willing to cover the higher costs for making these things a priority. Still, I am always a little mind-boggled when I hear that other people only spend $300 on food (often for a family of four).

Part of me is like “How do you do that? Teach me your ways!”, the other part of me things “meh, whatever. I don’t really want to compromise (much) when it comes to the food I put into my body”.

I guess this whole post is born out of curiosity (and a tad of inspiration to be more thrifty – because who doesn’t like to save some money or score a good bargain? Exactly.)

The USDA (United States Department of Agriculture) has developed four food plans (thrifty, low-cost, moderate-cost and liberal) for a nutritious diet on different levels of income. For a family of 2 (one male, one female) the food budget should be around $390 for thrifty, $499 for low-cost, $621 for moderate-cost and $776 for liberal spending (September 2015). This, however, does not take into account your location and the specific food prices where you live. I wonder how carefully one really has to shop to meet the dietary requirements on a thrifty budget.

Let’s just say that our budget hovers somewhere between the moderate and liberal plan – depending on the month (and how many weeks there are in the month). In September, we spent $619 on groceries which is exactly what is budgeted for the “moderate-cost” food plan. Over the last three months, we averaged $670/month.

Now, you may think that I am not paying attention to food prices, sales, or the like, but that couldn’t be further from the truth.

It’s not even that we buy a lot of access food. We meal plan every week and hardly ever throw anything out. I shop at the Farmers market and at three to five different stores, use coupons (whenever possible) and we cook mostly from scratch (I am mentioning that because ‘raw ingredients’ are always considered less expensive than (partly) prepared foods). We limit eating out to (cheaper) take-out food once a week or a casual dinner at a restaurant every other week (and that’s not even counted in our grocery budget). So yes, we do eat most meals at home (and for the record, hardly ever spend money on lunches or coffee shop purchases!), so I wonder if other people  simply have a higher eating-out budget? I don’t think that this is necessarily the case.

Regardless, I know there is room for improvement. Although I try to do so, I don’t always stick to the grocery list and am guilty of the occasional impulse purchase. One thing I could work on. I could also shop my pantry more often. Although things get eaten eventually (and I consider having a little stockpile generally a good thing), I should make sure that nothing goes to waste there either.

I am very curious, though: how much do you spend on groceries? How do you stretch your dollars?

I realize that grocery budget will be different for every family. It depends on your location, eating habits, preferences, priorities, what have you. So many factors go into the decision-making process of what we buy to feed our families. I am not attempting to win the contest of “who can spend the least on groceries”. I would never win anyway and it’s not my end-goal to “spend less than everybody else”. Food is definitely a priority in our household and I don’t want to compromise too much just to push the number down. We like to cook, we like to try new things and I don’t see food just as a means to an end. I know I should keep that in mind when I think about where my hard-earned money goes.

I guess I am just trying to see what’s reasonable and if there is a way to cut our budget a little bit (I am always up for a good challenge!)