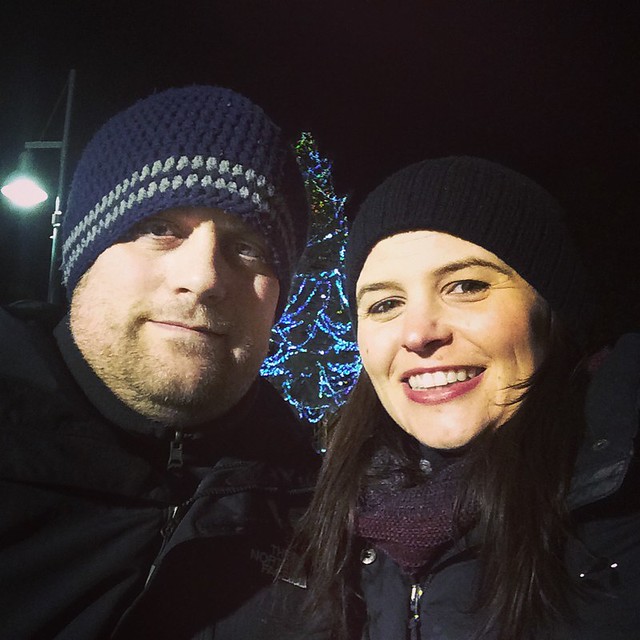 My idea of a perfect start into any new year? Bundled up in freezing temperatures somewhere in the snowy mountains … as you can tell from my Cheshire Cat grin, it was a good start.

This trip to the mountain? That is a perfect representation of the word that I chose for 2015.

It’s a little word with just three letters, but it’s something that I want to take to heart this year. In past years, there were a lot of reasons for talking about things a lot, but not really (being able for one reason or another) putting them into action. Now is not a good time is what I heard myself say lot. This year I want this to be different. Now is the time and the trip to Tahoe over New Year’s was the first step.

I don’t really set many goals (or resolution or whatever you want to call them) at the beginning of a new year, because if I am perfectly honest, I am usually planning and scheming all the time and any day of the year is a good day for resolutions.
But regardless, the new year  does always provide a blank slate (and a fresh, untouched planner with seemingly unlimited possibilities, if that is something that is as exciting for you as it is for me!) and therefore it comes naturally that we think about goals and changes this time of year.

So, I want to plan more and stick to those plans this year and make living in the here and now a priority.

Instead of just talking about how we should take more trips, I’d like to just do it. Decide on a whim to just get away for the weekend. Travel to places – especially places that are so close, but I haven’t been to –  when we feel like it. Who says we can’t just get up on a Saturday morning and drive? Ok, admittedly, I usually like a little bit more planning than that, but you get the idea.

I’d like to use my time more wisely. I sometimes fall into the trap of saying that I don’t have time to do this or that, but I know that this is not true. I don’t make time.  Don’t get me wrong, I’d still love it if the day had 48 hours, but that’s just wishful thinking. I think I’d still feel like I don’t have enough time if the day did have 48 hours. Admittedly, my biggest problem is that I have a hard time setting priorities. It feels like I want to do everything and I’ve been that way as long as I can remember. It’s always been hard for me to chose one activity over another. I also know that sometimes the sheer amount of options paralyzes me (and I end up doing nothing – at least not anything productive in my opinion) and I’d like to find a way to use my time more efficiently and not feel frustrated when the evening hours have slipped through my fingers yet again. Maybe it means that I have to plan a routine in advance that I can stick to and which will leave less room for indecisiveness during the week.

I’d really like to work on getting into a regular exercise routine again. I have been going to yoga pretty consistently and I have had on-and-off phases where I ran more regularly and then fell out off it again. I’d like to turn this into a more consistent routine this year. Now is the time.

I’d like to keep up our cooking routine, be more mindful of the food that we buy and put into our bodies. I think we’ve been pretty good this last year, but there is always stuff to improve on. When if not now?

I’d like to make more local friends. It’s been a challenge for various reasons in the last few years and I didn’t put a whole lot of effort in last year, frankly because there was a possibility that we weren’t going to be here much longer. But now that it looks like we’re going to stay around (at least for now), it would be nice to try and find some like-minded people to hang out with.

I’d like to continue to create. Crafting is my biggest outlet and my biggest joy. I want to learn new things and improve on my skills. Now is as good a time as ever.

What is your guiding word for 2015? Did you pick one?
Or have you made any resolutions or set goals for this coming year?