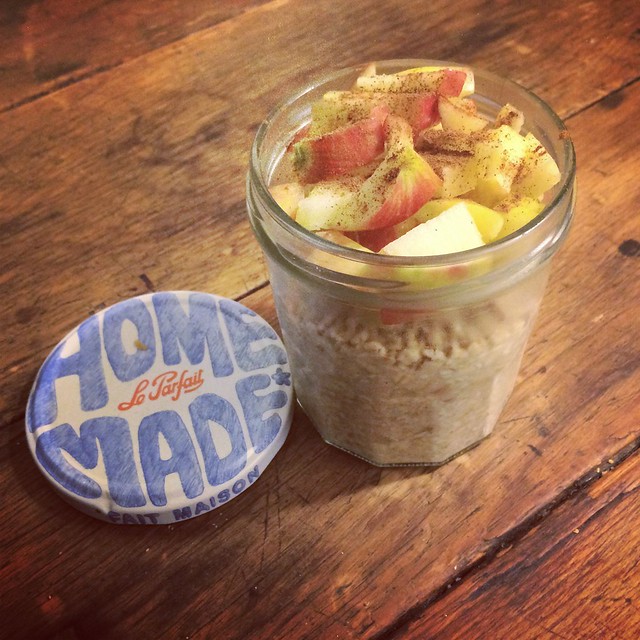 You guys, I cannot not share this with you. I’ve found the yummiest and easiest breakfast solution for the cold season.

As you know, I am not a fan of (regular) oatmeal. The prepackaged stuff is non-stomachable (even made with milk instead of water) and even old-fashioned oats turns into “glue” if you don’t do it right/wait too long to eat. And honestly, it’s so easy to make oatmeal from scratch that I wouldn’t buy it prepackaged again anyway.

Last winter, I started to experiment with different grains and ended up coming back to steel cut oats for a warm, soothing breakfast in the morning. Even though it only takes 10-15 minutes to cook them, it sometimes was too much effort for me in the morning and then the heated steel cut oats had to cool down, only to be re-heated again a little later at the office. It was ok, but it wasn’t ideal.

You’re probably going to say ‘Ok, so what? That is not new! Steel cut oats…. oatmeal… what’s the  big deal.

Well, for me I found that the trick is overnight oats. I know you can find hundreds of recipes for overnight oats on recipe sites and all, but I wanted to share my (super-easy) way of preparing them, because I think they’re even better than freshly cooked steel cut oats.

I previously (in the summer) made overnight oats with yogurt which I liked a lot and which was refreshing during the hot summer months. It didn’t really seem to be a good idea for the winter though, if I wanted to heat them up again the next day, but of course you can make them with milk, as you usually would, and I find the taste and texture the next day to be just perfect. Better than cooked oats, IMHO. It’s also a no-frills breakfast solution that doesn’t require a lot of preparation and is something I can easily stick with. You let your steel cuts oats soak over night and then just heat them up in the morning. Easy!

Combine the oats, milk, sweetener and vanilla extract at night in an air-tight jar and put in the fridge over night. Top with apples and cinnamon* in the morning and then heat up when you’re ready to have breakfast. It makes the kitchen smell like Christmas (I hope your co-workers like the cinnamon smell – I do!) and it’s the best warm, soothing, filling breakfast that will easily hold you over until lunchtime.

Oh, and it’s basically dessert for breakfast, with a healthy kick. Who can say no to that?

*I love apples and cinnamon. It’s my favorite. You can, of course, use other fruit and skip the cinnamon, if you wish.