We only had time for a quick stop in Bryce Canyon this time around, but since we were so close (within a couple of hours’ drive), we wanted to at least stop by and take a quick peek.

I know, I know, that is the totally wrong approach to National Park visits. The LAST thing you want to do is drive to a vista point, jump out of the car, take a picture, and be gone. We really, really tried not to do that.

We had about half a day to spare between our visit at Zion National Park and our next overnight-stop in Page, Arizona, so we decided to take a little detour. Bryce Canyon National Park is about 1.5 hours north of Kanab and I knew we wouldn’t regret stopping by there, if only for a few hours. I had been to Bryce Canyon before, but B hadn’t seen it on his previous visits and I thought it was definitely something worth seeing for both B + M. On our way, we passed a German bakery, Bäckerei Forscher, pretty much in the middle of nowehere along Highway 89. Random!
We made a quick stop, just to check out what kind of goodies they offered, but it was relatively expensive and since we had already had breakfast, we left without buying anything. 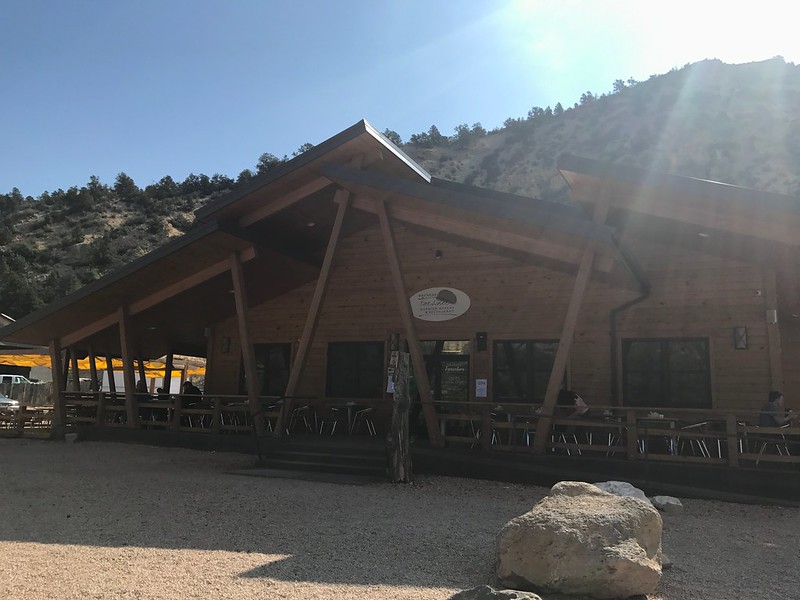 We arrived at Bryce Canyon National Park around noon. After a quick stop at the Visitor’s Center, we drove on to Sunset Point Overlook. We parked at Bryce Canyon Lodge and first walked along the rim to Sunrise Point with a beautiful view of the main amphitheater. 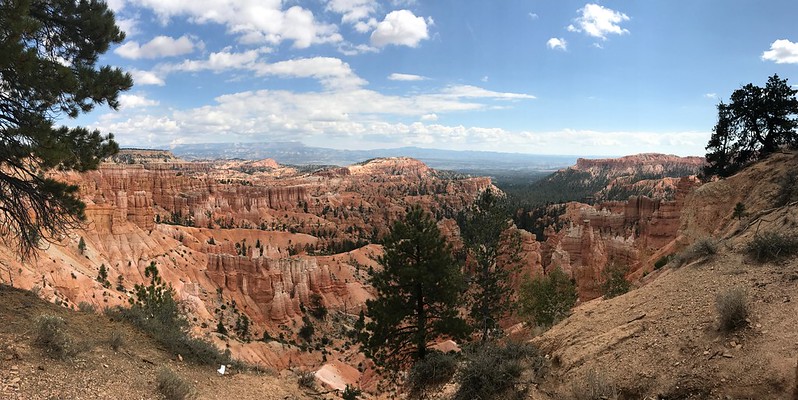 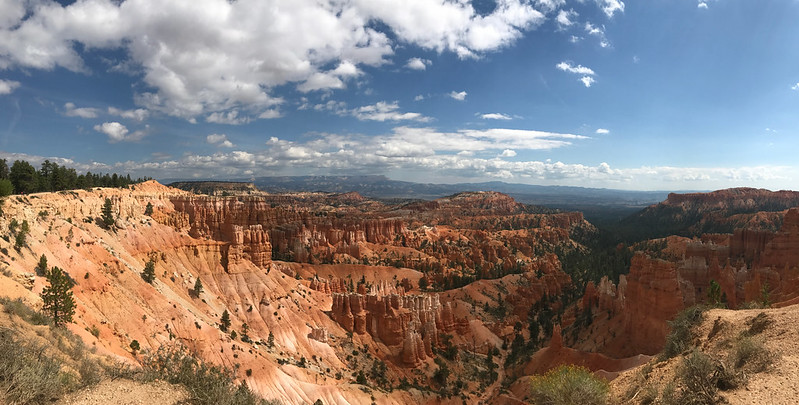 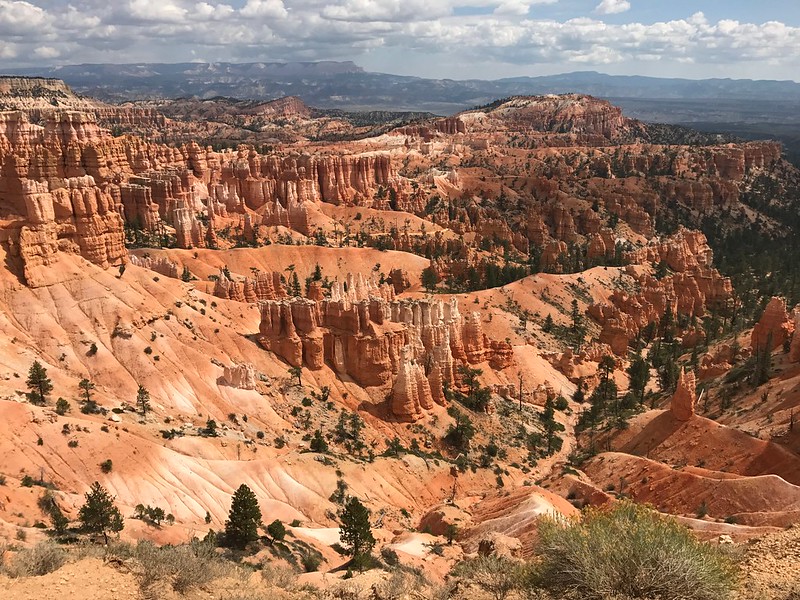 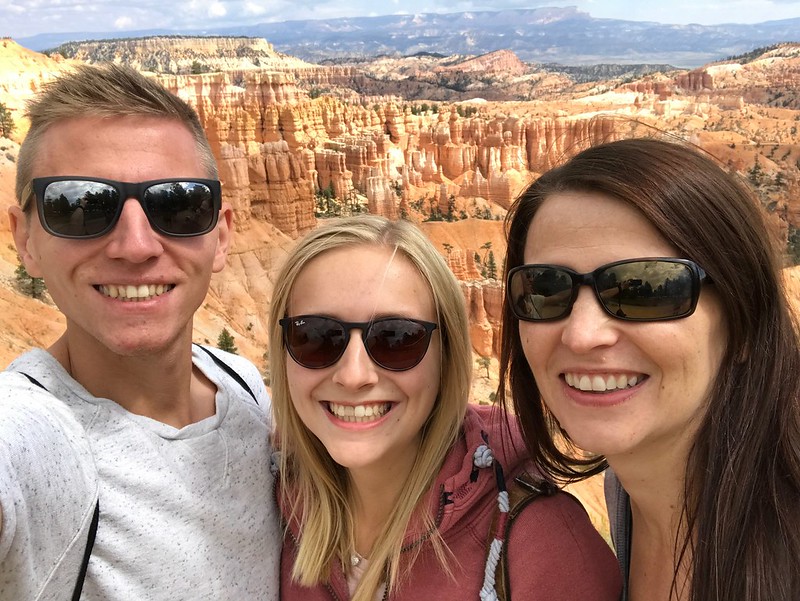 You can see the ‘Sinking ship’ behind us in the background (middle). 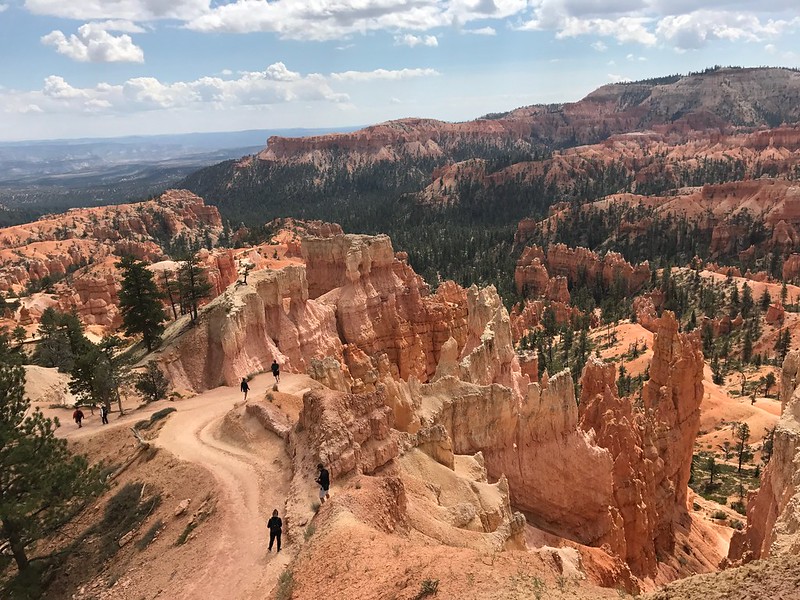 We walked back along the rim over to Sunset Point. 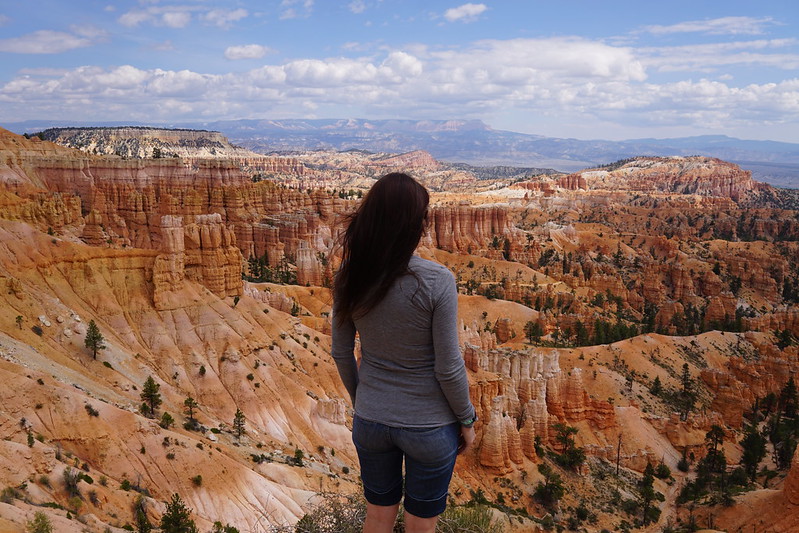 ‘Sinking ship’ right above my head and ‘Boat Mesa’ to the left. 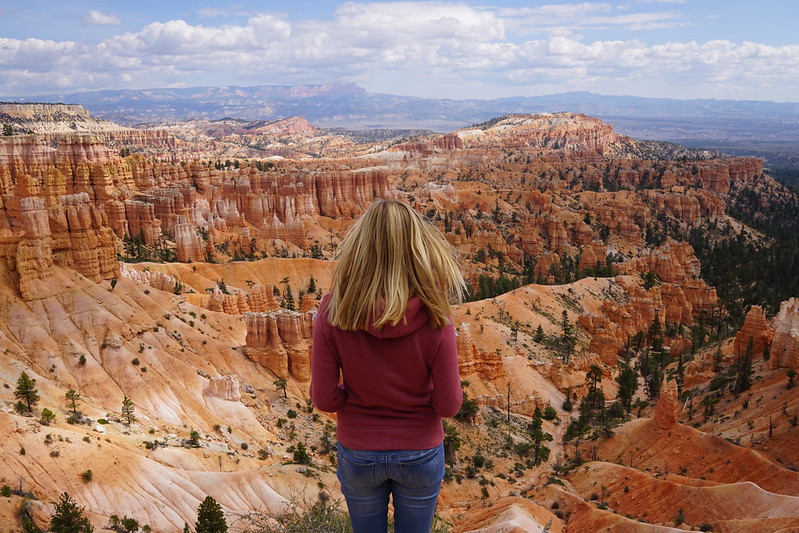 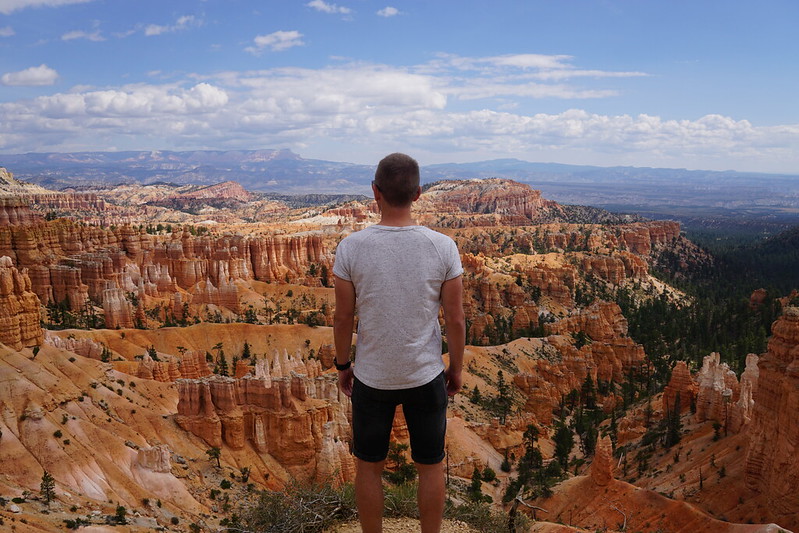 At 8,000 feet, Sunset Point offers dramatic views of Bryce Canyon’s main amphitheater and vistas of some of the most famous and breathtaking hoodoos ( this is what you call the spires of rock that have easily eroded columns and more resistant caps that you see in Bryce Canyon). They’re also often called tent rocks or fairy chimneys. They are commonly found scattered around the areas of the the High Plateaus region of the Colorado Plateau and in the Badlands regions of the Northern Great Plains, but nowhere in the world are they as abundant as in the northern section of Bryce Canyon National Park.

I mean, for this view alone the detour was worth it, don’t you think?

We didn’t just want to drive up, get out of the car, take pictures, and leave, but were hoping for a little bit more of a close up experience with the hoodoos while we were there. Luckily, there are quite a few shorter hiking trails that you can take advantage of when you’re pressed for time. We decided on a short hike – 1.3 miles round-trip – on the Navajo Loop Trail. 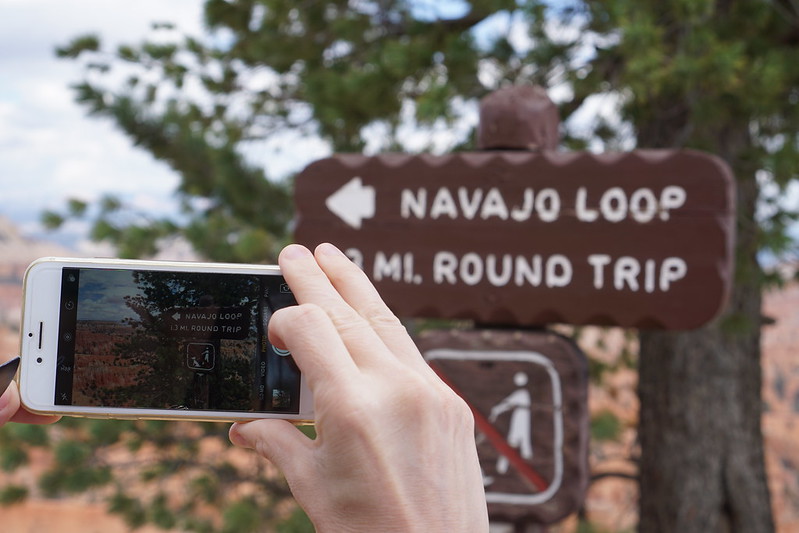 The Navajo Loop Trail begins at Sunset point in a rapid descent along a series of long and short switchbacks down to the canyon floor. At the bottom of the switchbacks, the trail straightens out and makes a gradual descent through Wall Street, where two towering Douglas firs have been growing in the depths of the rift for more than 750 years. 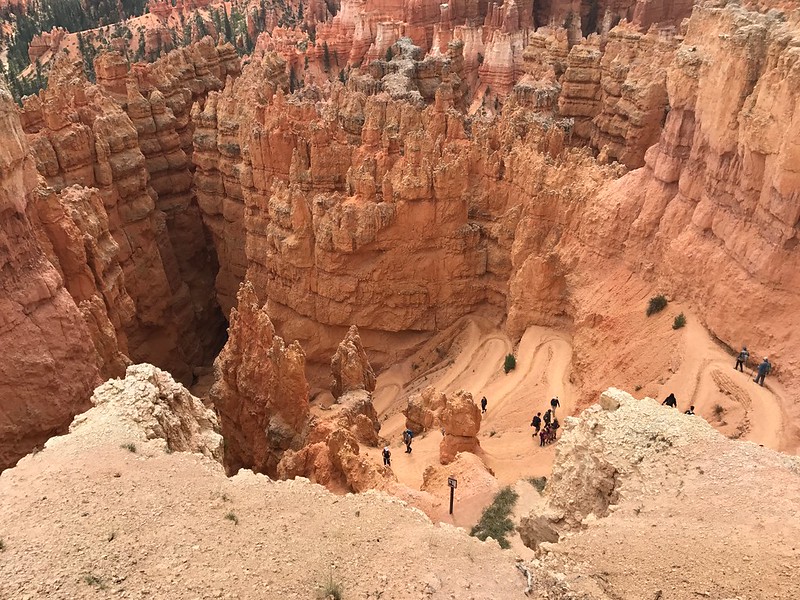 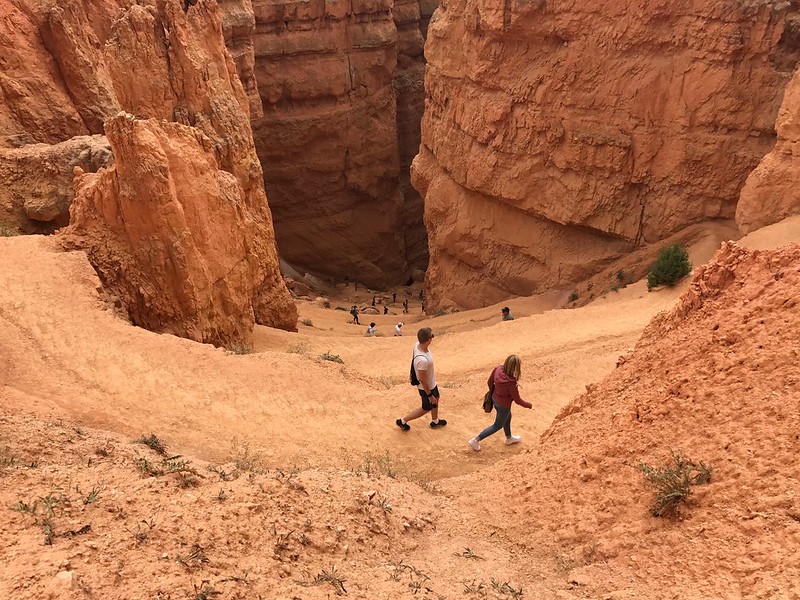 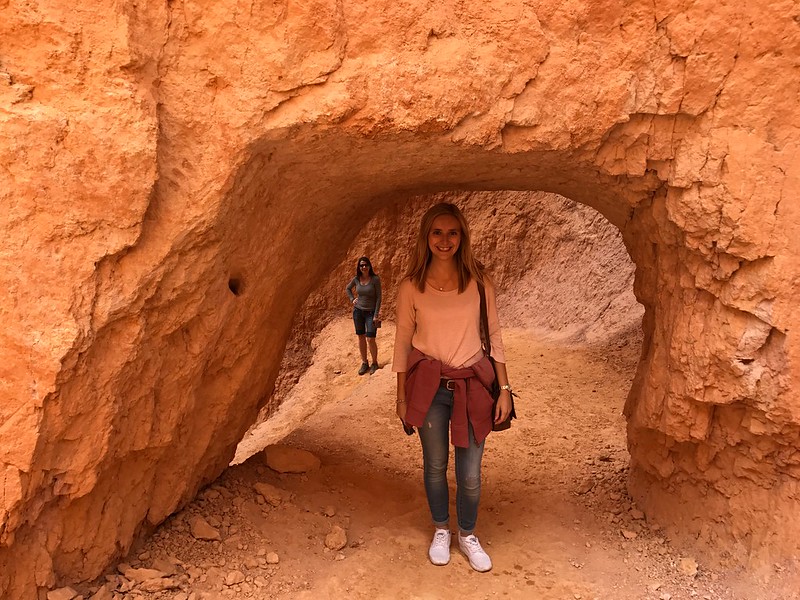 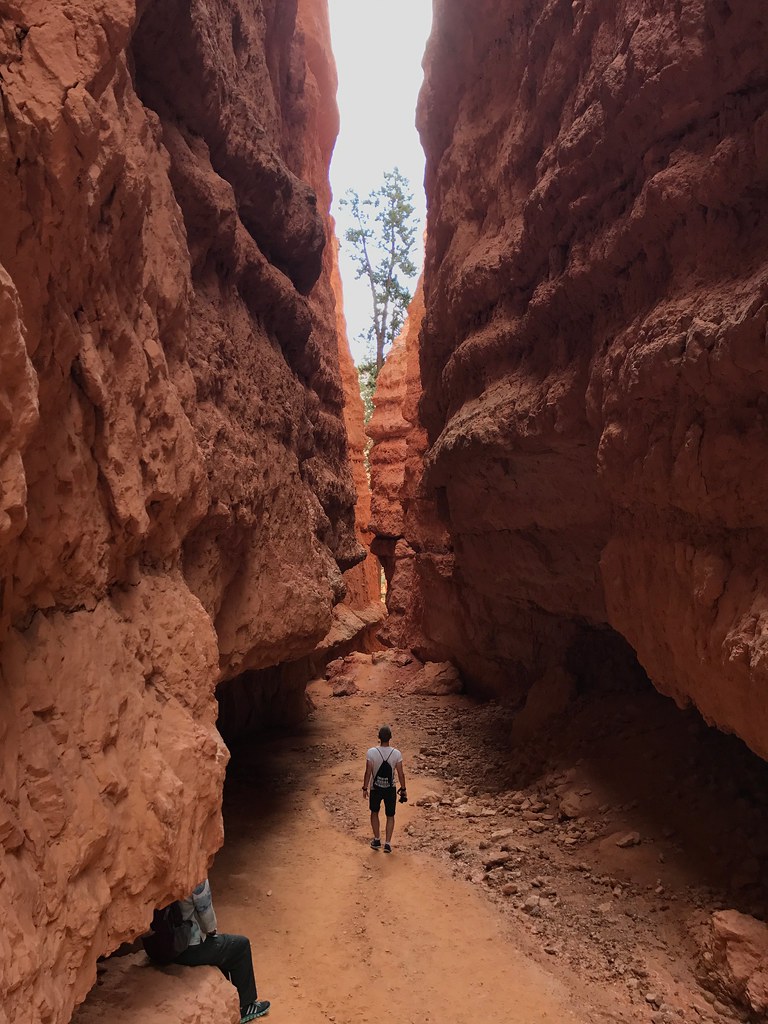 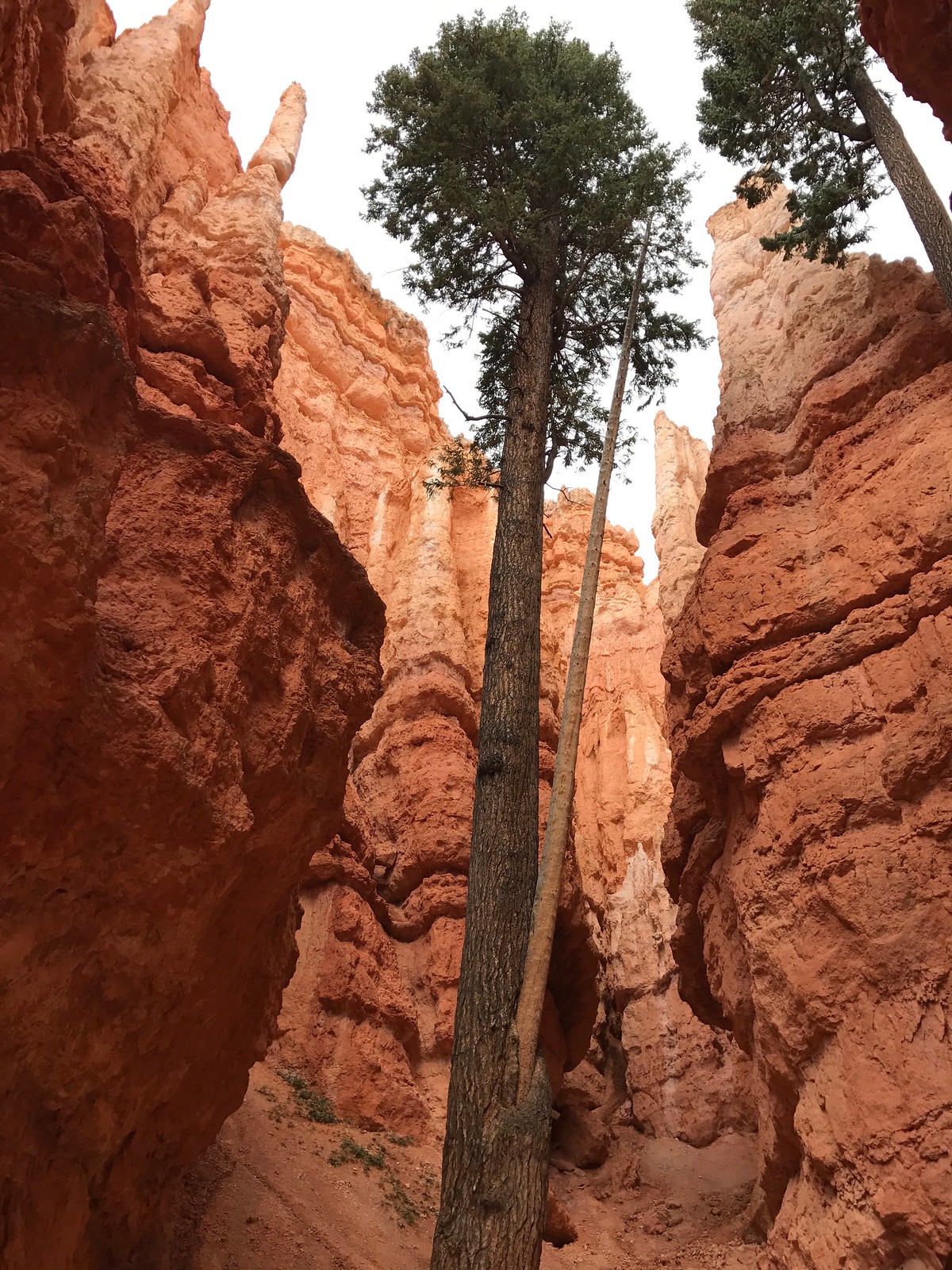 Eventually large hoodoo formations flank both sides of the path. It was just really cool to see the rock formations from a different perspective; not just from the top looking down, but now from the bottom looking up! 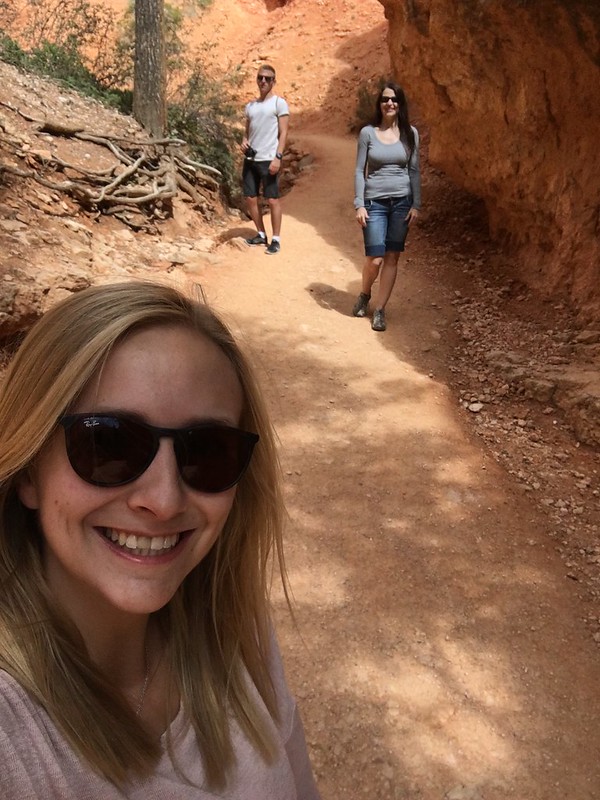 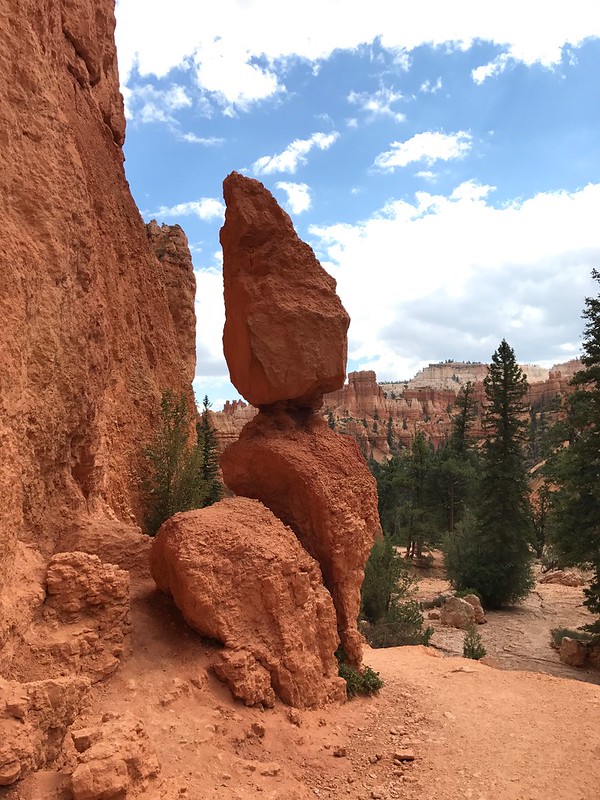 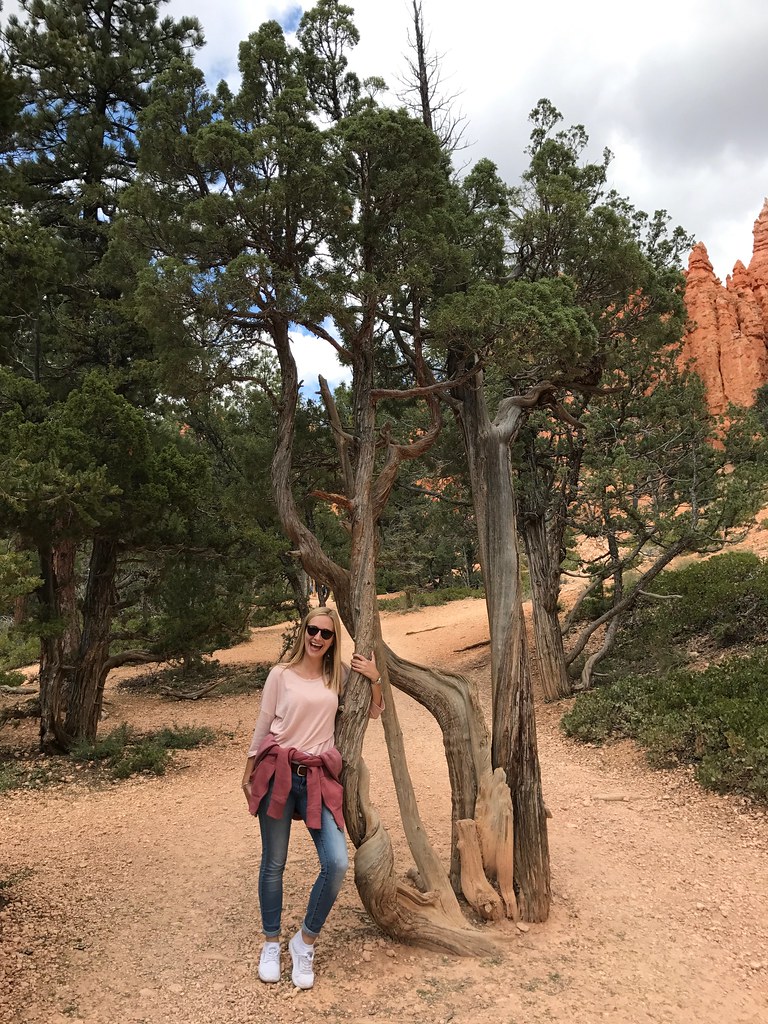 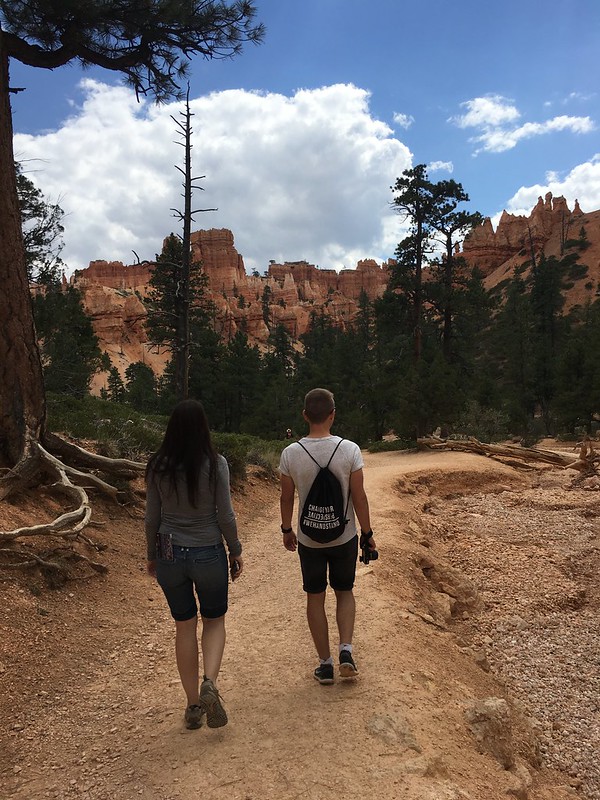 The last half mile of the path ascends in a series of switchbacks to return to the rim. Along the way you get more beautiful views of the hoodoos towering around you. 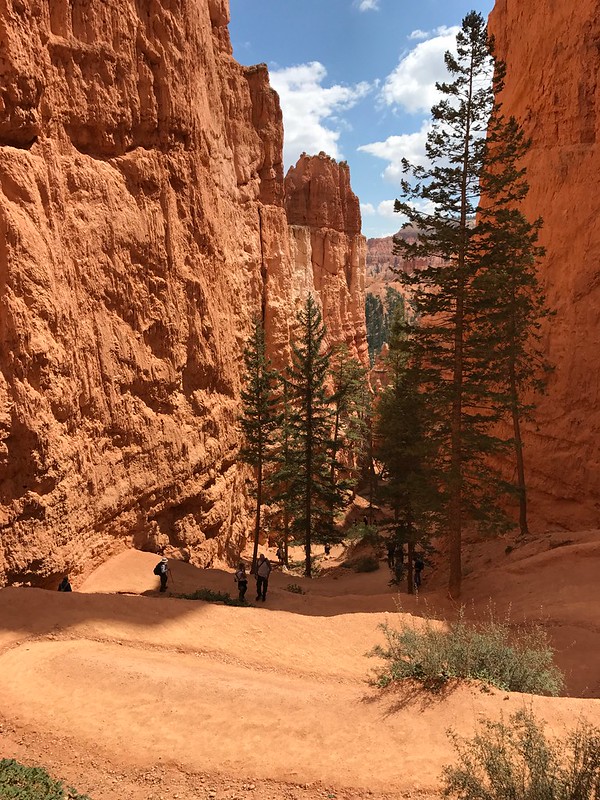 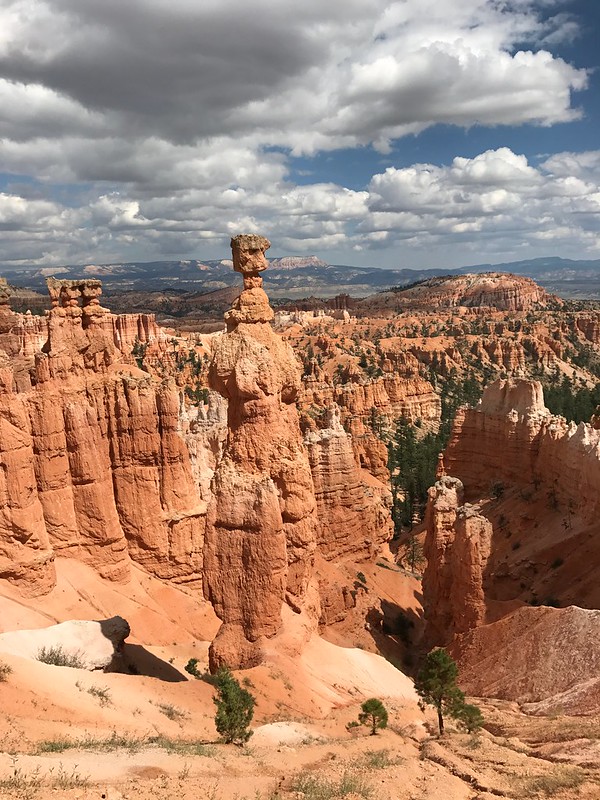 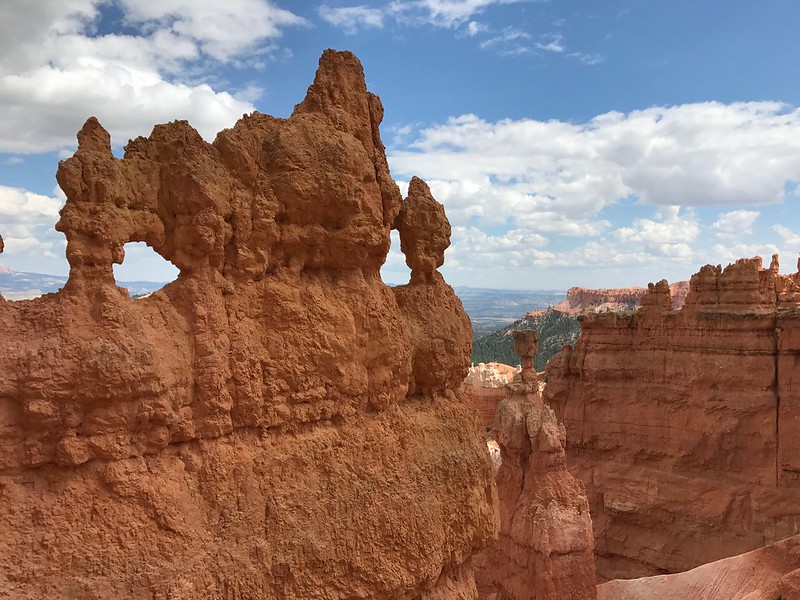 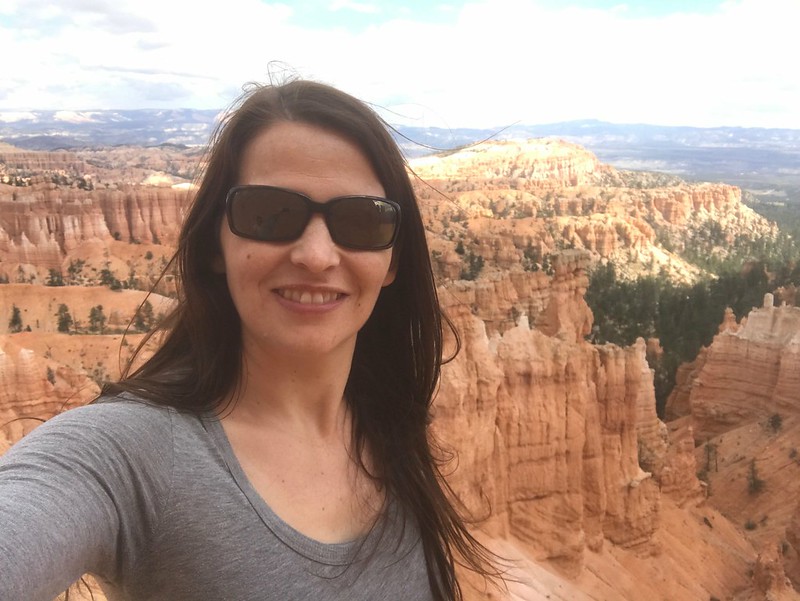 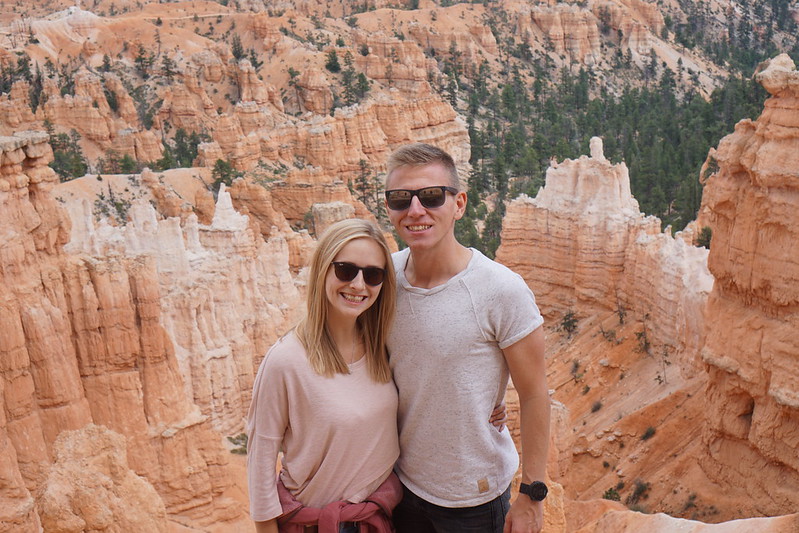 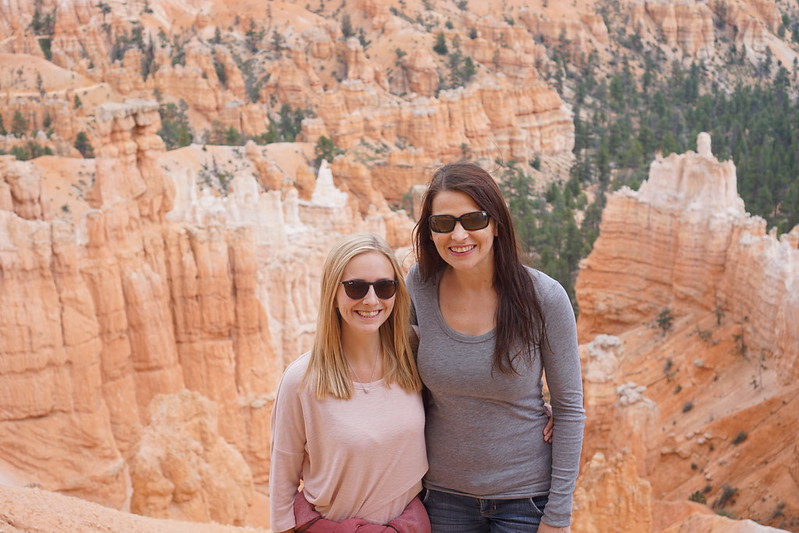 The hike took us a bout an hour. While the trail is fairly wide and built out, it’s considered a moderate hike as it has steep grades with “down and back” elevation changes of 550 ft/ 167 m.

On our way out of the park, we decided to make a quick stop at Bryce Canyon Coffee Company for some caffeine-to-go, but to our disappointment, the coffeeshop was closed on a Saturday afternoon. What the hell? Make sure to check online or call if you want to stop by there, because it seems like the opening hours vary by season and weekday. 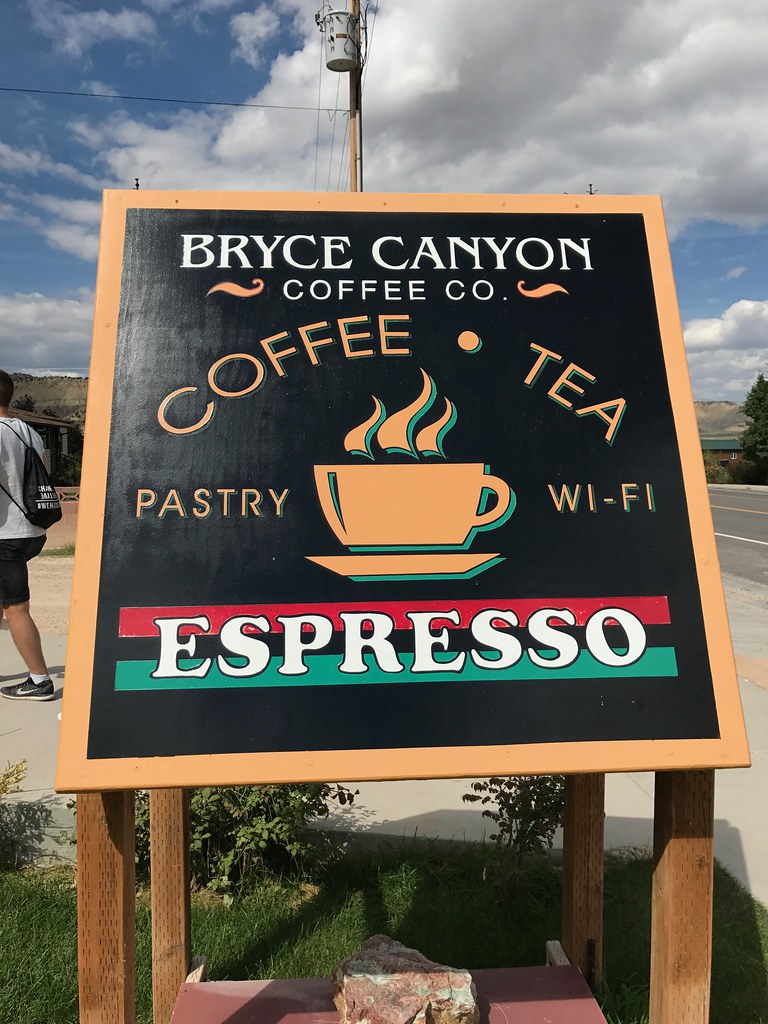 Without a caffeine-fix – and a little grumpy – we got back on the road to Page, Arizona. We would have loved to spend more time at Bryce Canyon National Park, but I am so glad we were able to at least spend a few precious hours!

Have you been to Bryce Canyon before? You should definitely go.