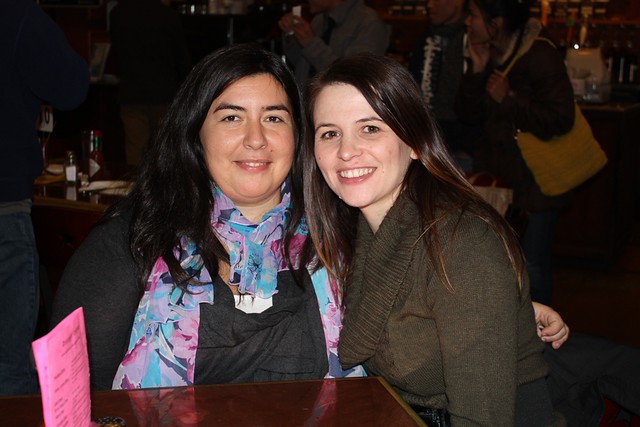 Last night I saw an old friend from College. We both were exchange students at UC Davis at the same time (only that I went back to Germany after 6 months and she ended up completing her degree in the US) and seeing her again was a bit of a déjà vu. We were both giggling like teenagers when we spotted each other at the “Crêpeville” restaurant and coffee shop. We hugged and stared at each other and shook our heads and hugged again. It was a little bit surreal, like we had been time-traveling or something.

The last time we had seen each other was six years ago. She didn’t want to believe me that it had really been that long, so I got out my iPhone, pulled up my blog and showed her “see! This was 5 years and 11 months ago almost to the day!“.
Honestly, it really didn’t feel like it had been that long. It actually felt more like we had talked to each other last week.

Here’s the funny part though: we didn’t  talk last week. In fact, we didn’t even email last week.  Or even the week before. We hadn’t really been in the loop with each other’s lives that much at all. I only knew that she had eventually moved back to Turkey. We had exchanged a few Facebook messages over the last two months, after she had let me know of the prospect of her possibly coming to California for a conference in early December, but nothing was certain at the time.
Over the last six years, we had only exchanged the occasional email or Facebook message. We didn’t even really hang out that much back when we were both attending UCD,  we only hung out a handful of times really, and still, she was always someone I thought of fondly and who’s name always came up as one of the first ones when I talked about people I had met in Davis. She was this quirky, funny, always-smiling girl that was just fun to be around. The few times that we did spend together were full and precious and had left both of us with the feeling that we had made a lifelong friend. With some people, you just “click”.

Then, she contacted me on Monday. “I am here“.  Her trip came together very last minute, there had been no time for us to really plan ahead. She was only in Davis for three days. Here was this tiny window of opportunity to see each other again and we made it happen. She made the effort to contact me and make time to see me, I made the effort to drive out to Davis on a week night and spend my precious after-work time with her.
And you know what? I did it, because she was worth it. I did it, because she would have done the same for me. I did it, because despite our relatively sparse communication, she’s my friend and even after six years I can talk to her just about anything and she “gets” it. Our common experiences as exchange students have put us in a spot, where we’ll always share a lot of the same concepts and feelings about life.