I hadn’t been on a horse since I was 15, or so. You know, when I was younger, of course I had the whole phase where I loved horses (I still do, mind you!), as all girls do! In class, I drew horses in my text books, my binders and on my pencil case. I begged my parents for riding lessons. I “played horse” during recess with my girlfriends and we each had our “own horse ranch” – sketched out on paper – and we would “sell” and “buy” horses from each other – also drawn on paper – or paid each other “paper” money to have one of our horses mate with a horse from someone else. We meant real business.
When I was 11, I could finally convince my parents to let me spend two weeks of the summer on a horse ranch. It was a magical time. And here comes the weird part: Up until today, I am still carrying around in my wallet the picture of the pony that I was taking care of during that summer. I was head over heels in love.

His name was “Herman” (terrible name for such a cutie, I know) and he was the smallest pony on the ranch (well, I used to be on the short side, too, when I was younger, but grew up to be almost 5’8′). We just got along splendidly.
He was a Shetland Pony, 95 cm (37.4 in) high at the withers and was black with a beautiful thick and long mane, which would blow in the wind when we went on horseback rides. His signature feature was a bright blue headcollar. My favorite spot was the space between his nostrils – it was so wonderfully warm and soft.

Naturally, due to his short legs, he was always last on our group rides and, being the little pighead that he was, he always started trotting in order to try and keep up with the bigger ponies/horses. He caught me quite off guard the first few times he did it, but then I knew what to expect and it was great fun :)

Every kid on the ranch had to take care of “their” horse full-time while we were there. We had to get up in the morning to clean the stable, we had to feed it, brush it, the whole shebang, but I LOVED it. I practically spent the whole day around Herman. I was kicking and screaming when I had to leave at the end of the summer and when I  came home, I was longing for a pony of my own more than ever before.

The next few summers, I was dreaming of going back to that ranch, but – don’t ask me why – I never did.
I don’t remember if my parents didn’t want to pay for it or if I lost interest and therefore the persistence to ask for it, but one thing was as clear as a day, I couldn’t forget Herman and subconsciously always wanted to go back. I kept telling  myself that one day I would see him again.

I spent years wondering how Herman was doing and if he was happy ( WHAT? You’re still here… kudos to you for making it all the way down here. I know, it’s sappy and heart-rending… ). I had always, always thought of going back to visit, until I found out a few years ago that he had passed away. It made me sad that I had never kept the promise to myself that I would go back and visit him one more time. So this photo is all I have left… a wonderful childhood memory. 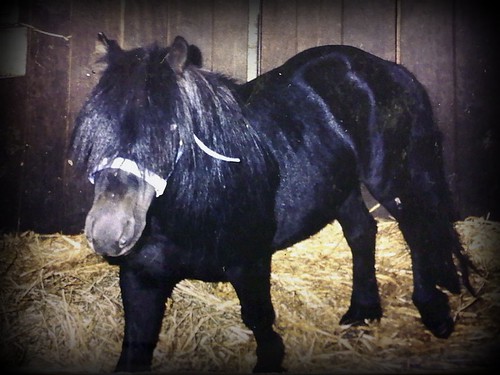