Happy Birthday to someone special :) 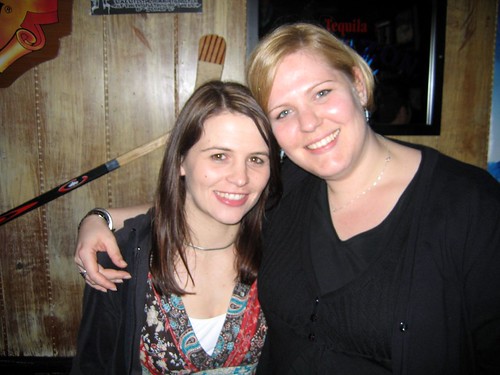 Today is my girl Kim‘s birthday. She isn’t too happy about turning 31 this year, so hop on over and tell her to have a fabulous day and not toÃ‚Â worry about the number!

I also want to let you know: Just keep in mind, sweetie, that I am almost a year ahead of you and it really isn’t so bad ;)

I am grateful to have you as my friend and I wish J and I could come and celebrate with you guys next week. We really appreciated the invitation :) Once again, distance sucks, but we hope that you’ll have a great time and that we’ll see you guys some other time. Soon!

Last night I went to another Sacramento Kings game with my co-worker. She has season tickets and whenever she can’t go – or like yesterday, her husband for that matter – she asks at the office if someone would like to have the ticket. My arm usually raises up much quicker than the two guys in our office can yell “I do!”. So I got to go with her last night.

We stopped for a quick bite to eat on the way out and then headed to Arco Arena. Having a season ticket holder navigate the car, definitely saves some time finding a parking spot and making your way to the seats.
Since we were a little early, we were going to get some drinks at the bar and of course, Michelle was also acquainted with the bartender from coming to the games so regularly. Awesome. We got preferred treatment right there [and a soft drink for free :)].

I know my Dad would start crying right now if he read this. He has wanted to go to a NBA game for forever, but whenever he came to visit, it was off-season. Unfortunately, it looks like he has to wait until he retires, which won’t happen for another couple of years, because the school breaks, when he can travel, are always in the off-season. So all I can do until then is keep telling him how much fun it is to be actually at the game and that he really really has to come with me sometime :) Do you think that is too cruel?

Well, the Kings lost last night to the Seattle Supersonics with 92:105. Part of the reason: Brad Miller,Â starting Center for the Kings and named Western Conference Player of the Week last week, missed the game after cutting his index finger on Sunday while doing dishes! Holy crap! When I heard that story on the radio the other day, I thought they were making it up. It just sounded too crazy. He got nine stitches because he basically cut open his whole finger. Dang!

Anyway, we still had a great time and I definitely would like to do that again. Michelle is great company, not only at the office :)