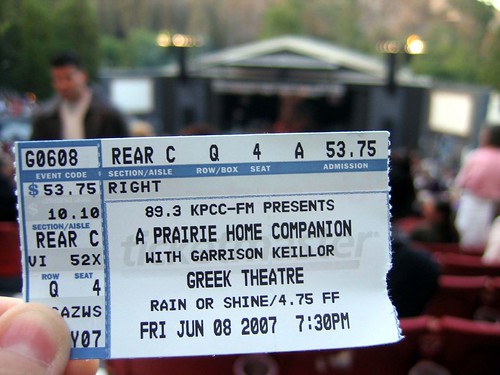 Yesterday we had tickets to “A Prairie Home Companion” at the Greek Theater in Griffith Park here in Los Angeles. I don’t know if you are familiar with this live broadcast radio variety show. If you – especially you Europeans – are, it might be because of the same-titled movie that was released in 2006. Here in the US, the show is very popular and while usually broadcast from St. Paul, Minnesota, it’s frequently taken on the road.

Last night, we had the opportunity to be part of the live taping of the show [which was actually aired in the afternoon today – I am listening to it right now!!! – Thanks to live broadcast stream on the Internet]. I ordered the tickets a couple of weeks ago and gave them to J on our anniversary. He was ecstatic! We are both fans of the show. I was introduced to it a couple of weeks ago when we watched the movie. Garrison Keillor, host of the radio show, played himself in the movie and he’s hilarious! Since then, I have listened to the show a couple of times in the car on my Saturday afternoon [grocery] shopping tours. It is a great mix of comedy, story-telling and different styles of music.

J and I left for Griffith Park early and brought our dinner. We wanted to leave ample time to get to the venue [you never know how long driving in LA will take you] and decided to have a picnic at the park since the Greek Theater is part of the Griffith park recreational area. Turned out that many other people had the same idea – so we were sitting on our blanket amidst a whole bunch of people who had brought their dinners as well. It was great!
The Greek Theater itself is an open-air natural amphitheater nestled in a tree-enclosed setting at Griffith Park – a truly awesome venue.

The show was three hours long without a break, but it didn’t feel like that AT ALL. I could have watched for another few hours. It was funny and entertaining with great special guests like Martin Sheen [part of the comedy sketches ], Meta Weiss [a great, young cellist] and Paula Poundstone [a stand-up comedian].

J and I had an absolutely fantastic night!

Oh yeah, and just be prepared. What Generation will play on that stage someday. I am pretty sure about that :)