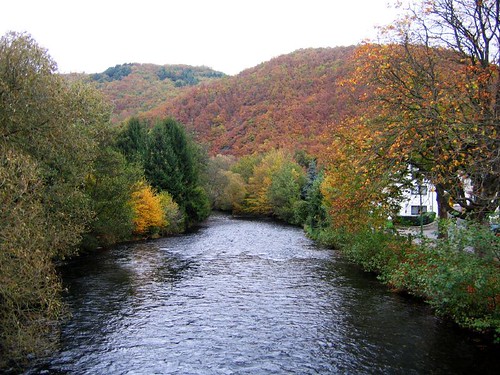 This is what Germany looks like in the fall. It’s almost a nice Indian summer like in New England… well, almost! ;)

I went on a “road trip” with my parents yesterday. They’re planning to buy a new car, so they rented a car over the weekend to make a test drive. After running some errands in the morning, we left at 2 p.m. and drove towards the “Eifel” – a hilly region in Germany. There we went for a nice walk through the autumnal woods.
We stopped for some coffee later in a tiny little village and I had a piece of one of the best applie pies I’ve ever had… and the piece was huge. It could have easily been cut up into two or even three pieces! [Damn it, I didn’t take a picture, before I went about eating that chunk.]
What also amazed me: In rural areas you really get good value for your money. This piece of cake would have cost at least twice as much had I eaten it at a cafÃƒÂ© in my town.
On the way back we drove to Aachen and I was about to buy a big box of “Aacher Printen” [a special kind of gingerbread] to take to CA… but then I changed my mind, because what is the point? Seriously. Jon doesn’t eat gingerbread and I do like to have it occasionally, but I definitely won’t finish the whole box. Besides, I really don’t have room for that in my suitcases. So I controlled myself and didn’t give in to the temptation. It smelled so good though.

Oh yeah, before I forget… Friday, my sister, my Mom and I visited my cousin Nicole and her new babyboy Luca. He’s three weeks old now and so freaking adorable. We just couldn’t get enough of him. She let me hold him for a while and he was sleeping on my arm and he smelled so good. Sometime [in the very far future!], I want to have one of those ;)

The rest of the weekend was busy with cleaning out drawers, sorting papers and other menial jobs around the house. It just hit me again today: only 24 days until I’ll get on the plane! ;)