So, I received another letter from the Deutsche Post [= German Postal Service = GPS] again on Saturday. This is going to be harder than I thought. They’re willing to pay me a compensation of Ã¢â€šÂ¬ 35,40. Ha! 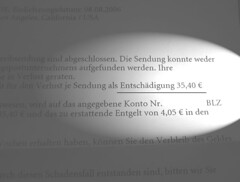 They call this a compensation? This is ridiculous. I am not willing to except this [although I have to admit that I read on the Internet that the regulations for certified letters say that a compensation will only be Ã¢â€šÂ¬ 35,40 per piece.] What actually pisses me off a lot more is that they didn’t mention WHERE my letter got lost. The letter just says that my certified letter couldn’t be located neither within the German Postal Area nor in the US. WTF?

Sylvia told me that “if you send something with a delivery confirmation and the postal service loses it (given it is the USPS) they have to replace the total value of what was lost and most of the time you get ‘reimbursed’ for whatever hardships they have caused you worrying about it”.

Have you found the article about this, Syl? In this case, it would be more than important to know if my letter got lost in Germany or in the US.
J still has to make sure that the people who sent the checks for our wedding cancel them as soon as possible. Hopefully the checks have not been cashed anywhere yet. I wouldn’t mind taking the Ã¢â€šÂ¬ 40 [Ã¢â€šÂ¬ 35,40 compensation, plus reimbursement for the postage], but I really would like to know what happened to my letter since they should have been able to track it and tell me where it has last been seen.
This is not going to be the end of this… I think I am going to write them another letter of complaint, and maybe also give it to a newspaper or something. They’re f***ing with the wrong person!