Oh my goodness… I am getting behind! Things are just crazy around here right now. I’ll try and see how far I can update you today ;-)

Our weekend was great. Friday night I went to the book club – as usual- and we were meeting at Scott’s place. He just recently moved into this really nice house with two of his colleagues and it’s a great place for the meeting. I also realized that it is a lot more common here for -let’s say- “middle-aged” people to live with roommates than it would be in Germany! There it’s only a College thing, here it’s just the way it is :) One of Scott’s roommates has this really cute little dog which always gets so excited when people come over and it jumps on your lab and tries to give you a ‘French kiss’ it’s really hilarious!! Here’s a picture of our bunch: 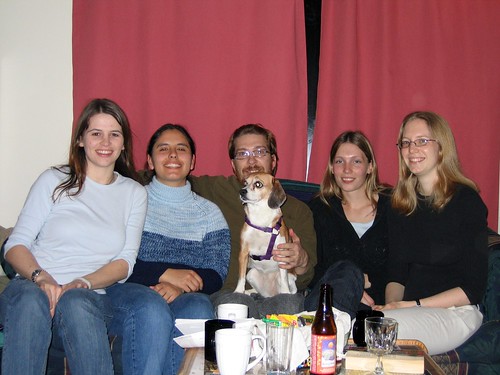 (me, Antonia, Scott (and Naima), Claudia and Robin)

Isn’t the dog just adorable?? :)
I brought Claudia along this time (since she’s been back from Germany for two weeks already) and I thought she would like something to do (as she’s not legally married to Stoyan yet and hasn’t gotten her Green Card and work permit).
We had a fun night talking about “the virtues of idleness” – a really interesting article by Mark Slouka. Have you ever thought of taking a break to think and contemplate about what is important in life and what isn’t?
For most people it’s “all about their work” and they don’t realize that they are missing out on the best part of life… “being idle” for at least a little while :) It was funny how the author found a way to incorporate the current administration into this topic and how “keeping people busy” prevents them from thinking and realizing how many things are going wrong in this country! Make sense to me!

Anyways, we had a fantastic time and Scott made some really good “bread pudding” *yummy*

Saturday we went to the Sacramento Zoo with Claudia and Stoyan. It was a beautiful day and since it was Free Admission Day, I thought it would be a great idea to use this opportunity and go out! :-) Well, a lot of other people had the same idea. When we got to the Zoo, the place was packed (and so was the surrounding park and Fairytale Town). We even had to stand in line to get in! Fortunately it didn’t take too long.

The Zoo itself was pretty small – compared to San Francisco Zoo – and we were done after about 1.5 hours. I had hoped that they have Koalas there, but they didn’t… but all these cute other animals. 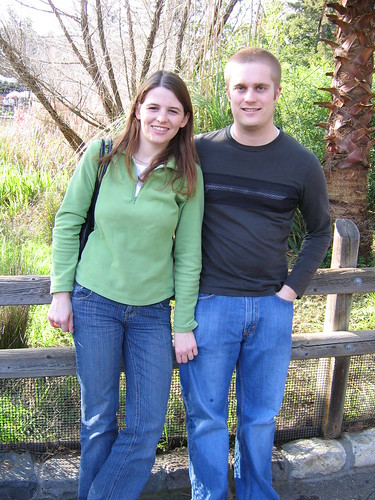 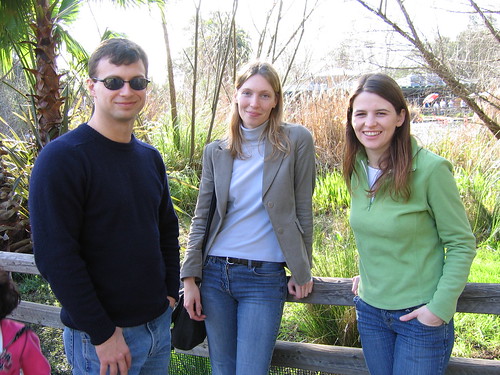 Later we went to Coffeeworks for an Iced Coffee and a nice chat. We had a great time and therefore we invited both of them for dinner at our place. J thought it was high time to start the ‘BBQ-season’ for 2005, so we had bbq-ed T-Bone-Steaks *yummy*, my famous potatoes and salad.

Sunday was the Superbowl – a very important event in every American’s life *lol* oh well, then I guess? J is not a ‘real’ American, because even I was more interested in the game than he was Usually people get together for a Superbowl Party, but J and I decided to watch it at home on TV… nice and cozy on the couch :)
The New England Patriots played the Philadelphia Eagles and J wanted the Eagles to win (mainly because the Patriots won the Superbowl last year). I – of course- as a New England fan had to cheer for the Patriots (secretly ;))… and they won!! It was a really exciting game and I actually did understand some of the?game (after J helped me out a little, as I had forgotten most of the rules again ;)).
One thing was annoying though… commercials every 10 minutes it bothered me, so you can imagine how much more it bothered J!!

Alright… that’s it for now. Talk to you later.