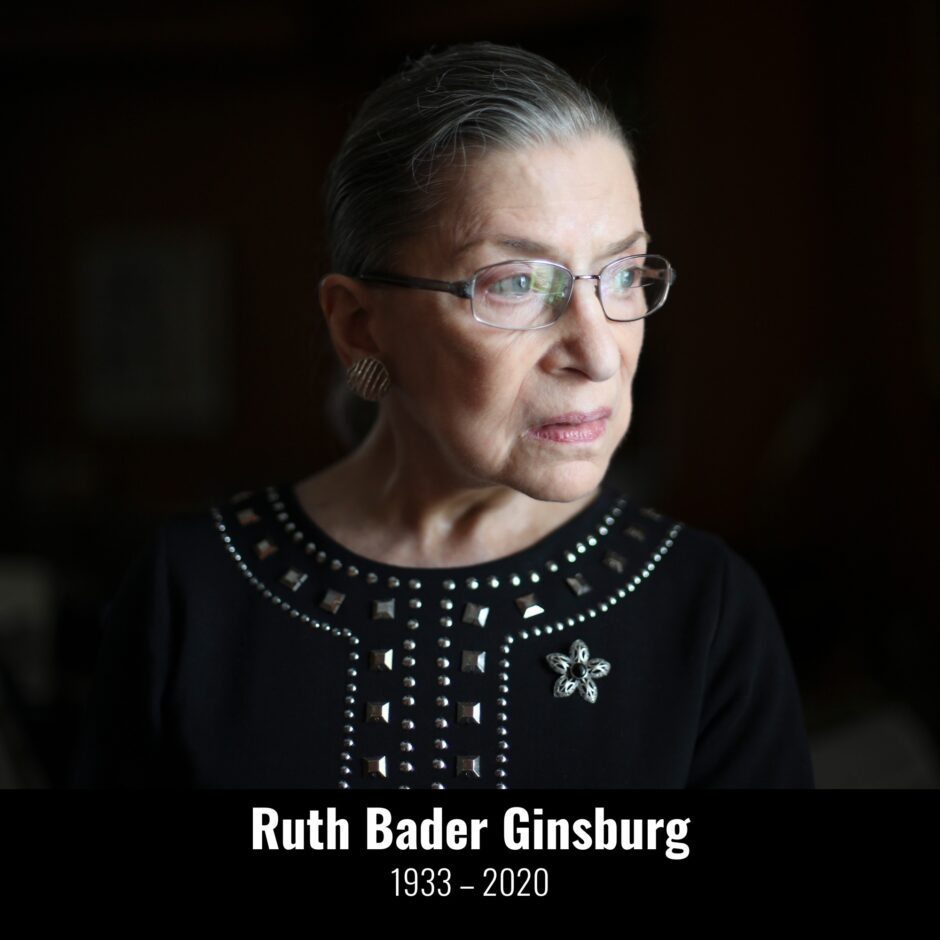 If you thought things can’t get any worse, you can count on 2020 to throw another wrench into the works. Ruth Bader Ginsburg, the second woman in history to serve on the U.S. Supreme Court, died in Washington, from complications from cancer, at the age 87.

When I heard the news on Friday, a “F*CK” slipped out of my mouth and prompted Jon to look up and over from the couch, alarmed because I don’t usually throw the F-bomb around casually. But this seemed like the only appropriate response.

Losing Ruth Bader Ginsburg just 46 days away from the presidential election is bad news bears and it hit me in the gut.

I don’t get too emotional when public figures die, after all,  I don’t know them personally, but damn, we needed RBG for just another few months. I know she was hoping and holding on to be around at least until election day. And damn, did she fight for us all, literally up until her very last day.

The fact that days before her death, she dictated to her granddaughter that her “most fervent wish is that [she] will not be replaced until a new president is installed” tells you all you need to know about her. She knew how precarious the situation at the Supreme Court would become if she didn’t make it, that her death would have profound consequences for the court and the country.

And count on Mitch McConnell to have full hypocrisy on display a mere few hours after learning of RBG’s passing, vowing that he’d fill her empty seat on the Supreme Court ASAP. As you might recall, he was the one who didn’t allow for Antonin Scalia‘s seat to be filled during the remaining 11 months of the Obama administration. God, everything just seems so broken right now.

But to be honest, we were pinning a lot of hope on a single woman, when it’s really been up to us all along.

Please vote in November! Tomorrow, Tuesday, September 22nd, 2020 is National Voter Registration Day! Make sure you double-check that you’re registered. If not, register! Make a voting plan. Vote early by requesting an absentee ballot. Encourage others to vote early.

Support Senate candidates in swing states by donating to the Get Mitch or Die Trying Fund (which will support the Democrats in the top Senate races in 10+ states) so we can flip the Senate. Vote Save America has raised more than 20 Million in the last 48 hours alone. It’s more important than ever that the Democrats take control back.

Rest in power, RBG, and thanks for everything.