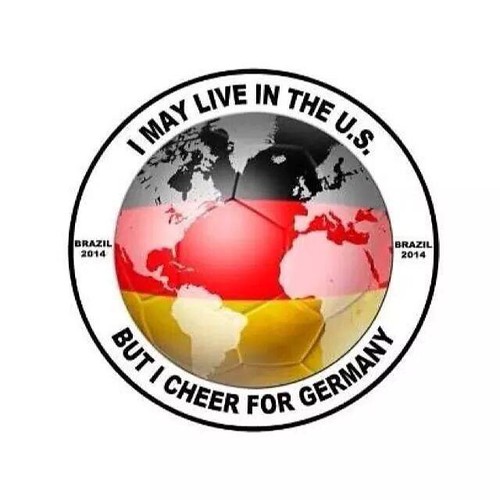 I can’t believe it’s been four years since the last world championship, but here we are again! I said this before and I will say this again. I’ve never been much of a soccer fan (back in Germany), I have never watched the Bundesliga games and I don’t pay attention to any standings (however, if I have to choose a team, I’d obviously cheer for 1. FC Köln).

When the World (and European) Championships come around though, that is a whole different story. It’s like a switch is turned on and I am surprised every single time how much I care about our national sport! This time is no different! I am a little sad that I won’t be in Germany at this time, because I know Germany is going a little crazy again for this competition!

Over the last decade, Germany has wriggled itself out from underneath a blanket of national shame and has learned to display some patriotism in the context of sports competitions. (And where else would we feel safer to show national pride than in regards to our national sport = soccer!).

The next month is going to be so much fun! It’s a bummer that most of the games will take place during the day (local time) and I’ll be at work for the majority of the games, but there is always the DVR (which J will have full responsibility for this month) and maybe I’ll be able to sneak away for one or the other game during my lunch breaks!

I’ll obviously cheer for Germany (first), but I will also root for the US team (unless they are playing Germany!), because a) they are my ‘other’ home team and b) they’re coached by Jürgen Klinsmann! Since the two teams are in the same group this time, the likelihood of seeing them both through the very end are slim. I keep wondering how  Jürgen Klinsmann feels about his team playing against his home country! Oh, and in case you didn’t know: our own Michael Ballack will be the studio commentator on ESPN. It always gives me a little chuckle to see them on American TV.

Are you into the World Cup? Will you be watching the next few weeks?