This post is part of the online initiative Reverb10. One prompt a day for each day of December. You can find all of my Reverb10 posts here .

Prompt: Let Go. What (or whom) did you let go of this year? Why?

This year, I had to let go of my Granddad. 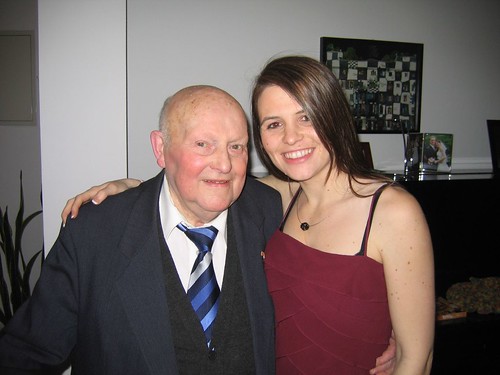 Although he was already 87 years old and had suffered a mild stroke 5 months prior, his death was really sudden and unexpected. He had recovered so well from his first stroke and otherwise was so healthy. He wasn’t on any pills or had any other health problems (besides from some back pain). Which 87 year-old can say that about himself? I was sure he was going to be around for a very long time.

Getting the call from my sister that morning in late February was just a big shock. I had never felt so alone and helpless being over 6000 miles away from home.

I was two months away from going to visit again. Two months. At the time, it just didn’t seem fair. I had talked to him a couple of days beforehand and he himself had said that he couldn’t wait to see me again very, very soon!
After I moved to the US, he was always afraid that when I visited, it would be the last  time he was going to see me again. It makes me sad to think that his fear of not seeing me again before he died actually became reality. He practically died in this sleep though and I’d like to think that none of these fearful thoughts were on his mind when he went to bed that night, not knowing that he would never wake up again.

Losing my Granddad was one of the hardest things I had to experience. It was the first death of a close family member that really hit me hard. My maternal Grandma died before I was born, my paternal Grandma died when I was only six. My maternal Granddad died 8 years ago, but it was different then because we hadn’t really had a very close relationship. With my paternal Granddad, however, I was very close. Having to realize that he wouldn’t be there anymore at my next visit was a tough reminder of the fact that every moment with family is precious, especially if you chose to live your life far, far away from them.