This morning, my sister called me at the office @ 7 a.m.

She never calls me at the office that early, and I knew something must have happened.

She told me that our Granddad was a the hospital, that he had suffered a mild stroke last night that had impacted his language center in the brain and that he was unable to speak (besides a few simple words). He otherwise seems to be doing fine, he has no physical or mental impairments (my sister says he’s visibly upset that he cannot communicate), but he’ll be staying at the hospital for a few days and they’ll do some more tests.

My sister and I both feel kind of bad that we had been complaining a little bit that my Granddad had been calling us all the time. We understood that he was probably lonely and just wanted to talk for a short while, but with our own busy lives (my sister being pregnant, having a toddler and working full time) and the time difference for me, it just didn’t feel doable to talk to him every day.
Today I feel crushed, because I am 6000 miles away and the only way to communicate with him would be by phone and right now, I can’t even call him. And the doctors didn’t know as of today if his ability to talk can ever be fully restored. Irony much?

I mean, what if he doesn’t recover and won’t be able to communicate much anymore? What if he suffers another stroke? I still have so many questions to ask him; questions that for one reason or another I never asked when I had the opportunity.

My Granddad is 87 years old. He was doing pretty well. Considering his age, he had no mentionable health problems (besides some back pain stemming from lifelong false posture caused by a leg amputation in WWII).
He was still living on his own, in his own house and he was still driving his car (which, admittedly was something that my family was trying to prevent for quite some time now) and he seemed mentally and physically “fit” for his age, generally speaking.
I subconsciously knew that the possibility of something happening to him had to be expected at any given time. Still, when it happens over night like that, it leaves you behind in shock and disbelief. 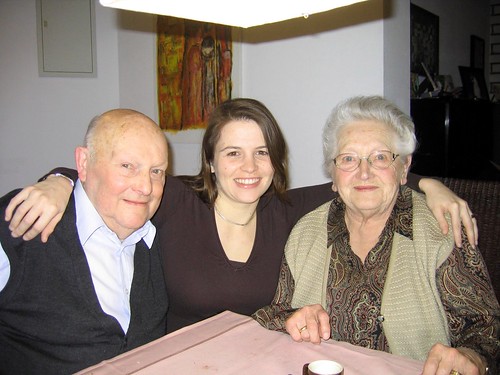 This is a picture of me and my granddad and great-aunt (my grandma’s sister).