My first impression of Alabama: damn, it’s hot and humid here. I am not used to this anymore, thankyouverymuch, I am here from California, the hot, but dry Central Valley.
I can easily stand an average summer temperature of 95°F without breaking into a sweat, but I get to 85°F Alabama and I am instantly soaked stepping out of the airport. Just lovely. The four pieces of luggage, that I was lugging around with me, did their part to help with that. Damn it, can you imagine how freaking heavy a laptop bag with TWO laptops (one personal, one work laptop) is? And how much heavier it gets if you have to schlep it through two airports? I ask you, where is this razor-thin, featherlight MacBook when you need it? (Note to self: I have to look into that.)

The first sign that I was entering “the South” was the guy on the plane next to me who pulled out  “A Christ-Centered Life” and a bible (you know, to cross-reference!) mid-flight. I was slightly amused to see the typical “stereotypes” thrown at me so early into my trip.

The next indication wasn’t long in coming when the people at the airport pretty much sounded uniformly like “Bubba J” to me. Heh.

The flights yesterday were nice and uneventful (that’s the way I like it). On the first flight (LA-Houston) I watched “Before Sunrise” for the umpteenth time, I just don’t get bored with this movie.  On the second flight (Houston-Huntsville) we had our own little major sheet lightning show right outside my airplane window. Sweet baby Jesus. I was a little scared. There was this monstrous cloud that was hardly visible, because it was so dark outside already and then the lightning lit the whole sucker up from behind and from all sides. It was breath-taking. I was glad though that we were a safe distance away (it wasn’t even a bumpy ride at all).
Here’s my amateur attempt to capture the spectacle with my cell phone camera (timing it right was pretty much impossible): 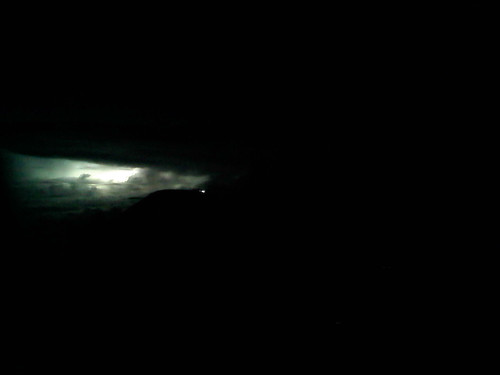 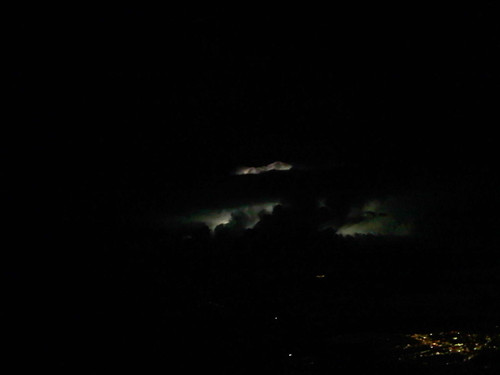 I got into Huntsville around 9:30 p.m. and met two of my fellow workshop attendees on the shuttle bus back to the hotel (one of them I had previously emailed with, how funny is that!?). I think the shuttle driver, a sweet young kid, was a little taken aback by my inquiry about traffic conditions for Friday afternoon.
You know, my Californian-programed mind was planning ahead, thinking: Friday afternoon = rush hour =allow at least 1 hour, when it usually takes 15 minutes, to get to the airport. He was shaking his head and said, slightly amused, ” there’s no traffic in Huntsville.” My response, a little embarrassed, “ah yes, of course. That’s good to know.” ;)

I have a pretty sweet two-room suite with a king size bed and the first day of the workshop was great (except for the fact that my laptop was pretty much useless, because I couldn’t run the software for which I am taking the training, and it’s a little frustrating to not be able to do a ‘hands on’ training, to say the least.)
I’ve been frantically working with our IT guy from the office, who’s been a life saver so many times before, but we have not yet figured out what the problem is. I am hoping to have  better luck tomorrow.