… my sister called me and told me she was pregnant.
Positively and 100% pregnant.
It had been such an eagerly awaited news and I wasn’t anything but extraordinarily and overly happy for her! Now it’s exactly one year after the exciting news and there is this 4-month-old bundle of joy in our lives now. It’s amazing how I can hardly remember what it was like when Greta was not yet part of the family!

Just yesterday, congratulating my cousin on his 18th birthday, I realized how fast time has gone by… especially the last 18 years. Much, much fast than the first 15 years. It’s simply amazing to me. And a little scary (but I won’t let that overwhelm me too much).
I am just hoping time will not fly by that fast with Greta, especially since I won’t be around to see much of her growing up.
My heart kind of aches thinking about that by the time I am going to see her again, she probably will be able to walk towards me on her own.
She’s already changed and grown so much in the last two months that I haven’t seen her.

The good thing is, due to my being so far away, Greta will have lots and lots of pictures and videos of herself when she’s older, because I make her parents and grandparents send me updates every single week! I guess, sometimes good things come from having an aunt living so far away. 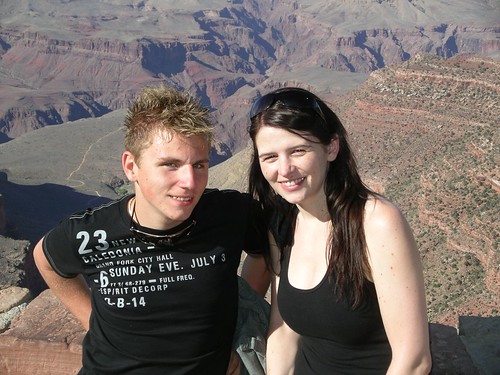 Basti and I two summers ago at the Grand Canyon

I cannot believe it.
I still remember when I was 15, holding him when he was just a little baby.
Now he’s officially coming of age.

I really, really hate that I can’t be with him and the rest of my family today. I know that my Mom has planned to get everybody together for a surprise birthday party with coffee and cake (“Kalter Hund” and “Eissplittertorte” – two of my childhood favorites!) and I know that Basti will really love it!

Do you have any special memories from your childhood birthday parties? Did your Mom make any special cakes/pastries or were there any special traditions on birthdays?

I just called and talked to him on the phone. He was humble and appreciative of the things people have done for him for his birthday. The fact that he preferred a family party today over hanging out with his friends, tells me a lot.
He’s a good kid, even though it wasn’t always easy for him growing up with a single mom, and it feels good to see that he’s turning into a responsible young man.
I am really thankful for the great relationship that we have (when I asked him what he wants from me for his birthday, his answer was “I wish you could be here on my birthday”. Awww, isn’t that the sweetest thing?)

Ok, this is hard to admit, but I probably have not worked out on a regular basis in at least 6 months and I feel awful about it.

I went to the gym on Sunday. Finally.
I thought it would never happen again, even though I’d been craving the after-workout feeling for a while, I could not for the life of me get myself to the gym for a regular work out.
I blame it on the winter blues and the fact that I don’t own an Ipod.
I mean, how am I supposed to work out with 4 TV’s with different programs AND the stereo blasting at me at the gym? Seriously.

Everbody has an Ipod these days (even Carolina! ;)), and I don’t even own a simple MP3-player.
But then again, J has an Ipod. I guess, I could have borrowed it. Although, there is no music on it right now (we had to reset it)…ha!
So there, there is your excuse. And a damn good one, too ;)

Anyways, I finally kicked my “inneren Schweinehund” in the butt and just went toÂ the gym on Sunday. Yesterday I felt comfortably sore and now I am looking forward to the next work out in hope that the soreness will go away for good :)

Besides this glorious news (I know, I know), I went to my first babyshower ever (!) on Saturday. My co-worker is going to be a Dad in April and my other co-worker and I (just girls, you know) were invited to the babyshower. I honestly had no idea what to expect, but it was seriously fun!

In retrospect, I wish I had taken this American tradition and had run with it.
I would have loved to throw a babyshower for my sister :) But hey, maybe there will be a “next time”!

There were drinks and appetizers, we played some silly games (not the silly ones that I was told about though) like guessing the circumference of the baby belly by cutting a piece of ribbon (the one with the closest guess received a prize) and watched the mom-to-be unwrap her enormous (!) pile of gifts. Wow, people were so generous!
On top of all the gifts, they received like a 2-months-supply of diapers already. Not bad, considering what a pack of diapers costs these days!

The rest of my weekend was less than exciting.
I had to run my usual errands and I sat down to deal with my tax return. I tried out one of the free tax softwares online, and guess what? Who would have thought that I am entitled too a much bigger refund than previously anticipated!?
I could have totally missed that if I hadn’t tried out the online software.  That really made my weekend! Wohoo!
(Now, you keep you fingers crossed that with all that budget crisis going on the federal government will actually disburse the refunds.)