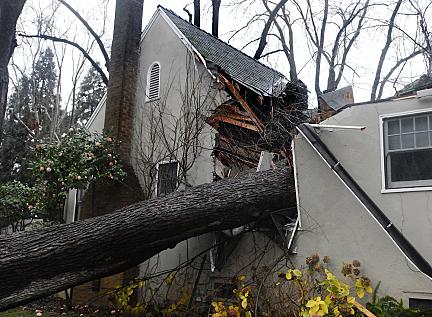 This is what the consequences of a “monster storm” look like in CA. 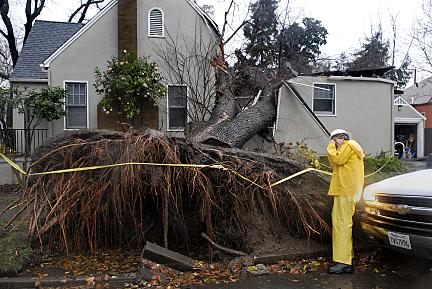 Do you think that would have happened to a brick house?
Fortunately, that wasn’t our house … but that was just a few houses down the street. Our weekend has been rough, to say the least. The big storm hit Sacramento on Thursday night.
J and I awoke to the wind howling underneath our roof and a serious draft from the window. We were up quite a bit, because the wind was so loud that we couldn’t go right back to sleep. The branches from the tree outside were pounding and the rain was pattering against our window.

In the early morning hours, we had a power outage, but that was only for a short while and J was moreÂ worried about our window… after seeing this house [see above] the next morning, we maybe should have been more concerned about the tree in front of the duplex, but the worst that we could think of at that moment wasÂ  that the “provisional” plexiglass window in my room might come loose – and it did!
I have one window in my room which used to be one of those “standard” metal frame-sliding windows. The are by no means airtight and usually look as cheap as they are. On one side, the window glass was taken out to put in one of those small air-conditioning units and the upper part of the frame was filled with a plexiglass window that was rough-and-readily “sealed” with some rubber foam. Pretty professional, eh?

As you can imagine, the storm rendered the plexiglass loose and -since I couldn’t open the other side of the window- I had a hard time trying to get the ajar upper part of the window snap back into the frame.

Ha! I can’t imagine I am telling you this, but it’s the truth. We fixed the window with tape and some old socks. I would say that it looks pretty funny, if it wasn’t so serious. Hopefully we can get the landlord to fix it.

Needless to say, we didn’t really go outside at all this weekend.Â Thank GodÂ weÂ had just received three newÂ movies from Netflix :)