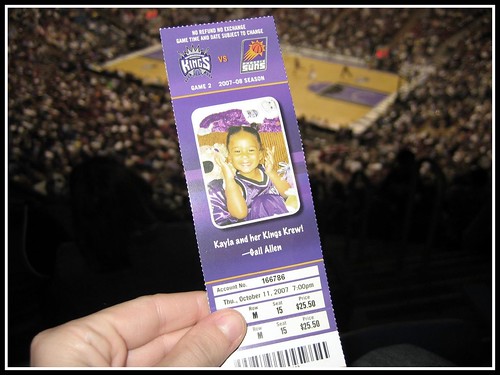 Yes. They’re finallyÂ back: my posts about the Sacramento Kings :)

One really good thingÂ about living in Sacramento again is that I’ll be able to watchÂ ALL the Kings games on TV again – on a local TV station with my favorite commentatorsÂ of all times, Grant Napear and Jerry Reynolds :)

Another good thing is, I’ll be able to go and seeÂ themÂ LIVE again. Like last night.Â My co-worker has season tickets and whenever she can’t go – she offers them to one of us at the office. Because yesterday was on such short notice, nobody could or wanted to go…Â except for ME :)

So cool that Jon is here andÂ he could actually go with me. He picked me up from work, we had a quick dinner at Subway’s and almost made it to Arco Arena in time for the game start.

Unfortunately, it seems like I have to re-familiarize myself with the team again. A lot of changes have taken place since I closely followed theÂ NBA games. I think there are only three players left that I remember from two years ago. It was still so great to see them play again :)

It’s still Pre-Season and they didn’t do too well last night… lost by a 12-point difference against the Phoenix Suns. They just didn’t seem as “awake” as the other team, but I hope that’llÂ improve during the season. I am so excited that I’ll be able to watch NBA again :)