yes, here I am…and it feels kind of strange :) but let me start from where I last left off…Sunday afternoon we went to Venice Beach, walked along the promenade and had dinner at one of the sidewalk cafés. It was very nice :) then we walked all the way back to Santa Monica (where we had parked our car) and waited for the Sunset. Here are the last photos that we took that day. 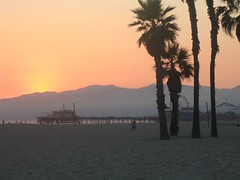 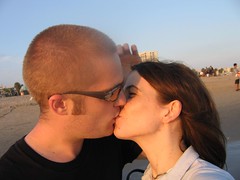 Then we went back to the Motel and stopped at a supermarket on the way to get a few more things for on the plane.

We had a really nice and relaxed night and got up at 9:00 a.m. to go and have breakfast at IHOP which was right around the corner. I was already looking forward to a Belgian Waffle with Strawberries when we realized that the IHOP place was new and not yet open :( so we had to look for another place to eat and we found a little café, but they only had “very American breakfasts” with eggs, bacon, sausages and that kind of stuff. So I thought, what the heck, I won’t have that for a while anyways ;)

Jon took me to the airport at noon, we checked my bags and then went back to the car to hang out a little bit. Boarding time was at 2:30 p.m., so I was going to go back inside around 2 p.m. – I couldn’t help but cry a little bit when I had to go, but it wasn’t that much because I had to leave Jon [it’s only four weeks… piece of cake ;)] but more because of the whole situation at the airport that we had so many times before with a more uncertain future. Once I was in the terminal, it was ok though.

The flight was delayed for a little bit and we took off about 35 minutes later than scheduled, but the good news was: the flight would only be 10 hours (instead of 11) which I thought was great. I had a seat on the aisle (because I always try to drink as much as possible and have to go pee then every 30 minutes :)) and the seat next to me was empty. Lucky me!

Nevertheless, I couldn’t sleep at all, so I basically skipped the whole night’s sleep from Monday to Tuesday. I arrived in Düsseldorf at 11 a.m. sharp and my parents, my sister and my aunt were there to pick me up.
I always hate it when I am waiting for my luggage and people can see you through the glass doors already… this is usually my time to get prepared for seeing my family [or whoever picks me up] again ;)

They were totally excited and it was fantastic to see them :) but at the same time it felt so weird to be back here… can’t really explain it.
We went home [and I asked my Dad to put down the paddle on the Autobahn ;)] and then we had a nice welcome brunch at my house. My Granddad and Great-aunt came over as well and they were sooo happy to see me, as you can imagine. I hadn’t seen them for 19 months and my Granddad had been in the hospital recently. He always brushed it off as it was nothing, but he had been treated for prostate cancer [the doctor’s said it hadn’t spread out luckily] and he admitted that he had been kind of scared that he won’t see me again :(

We had a nice afternoon together, my sister had baked a pie for me and in the evening my uncle came over as well to see me. It was great, but at that time I was dead-tired. I didn’t go to bed before 11 p.m. though as I was trying to avoid a “real” jetleg by getting into a regular sleeping pattern.

I spent the day with my parents and my sister yesterday. We went to IKEA – always fun! – and Nina and I participated in a sweep stake and believe it or not… 20 minutes later my sister was announced over the store’s speakers as the winner of an Ikea gift certificate. I couldn’t believe it… my sister ALWAYS wins shit everywhere. It’s really not fair :)

In the evening, Dirk [Nina’s boyfriend] came over for dinner. I must say that my Mom treats me with really good German food right now :) it’s soooo good!

So, the next thing I am looking forward to is meeting Sanni on Monday *aah* I can’t believe it’s only 4 days! I hope I’ll have fully recovered from my sleep deprivation by then *lol* talk to you all soon.