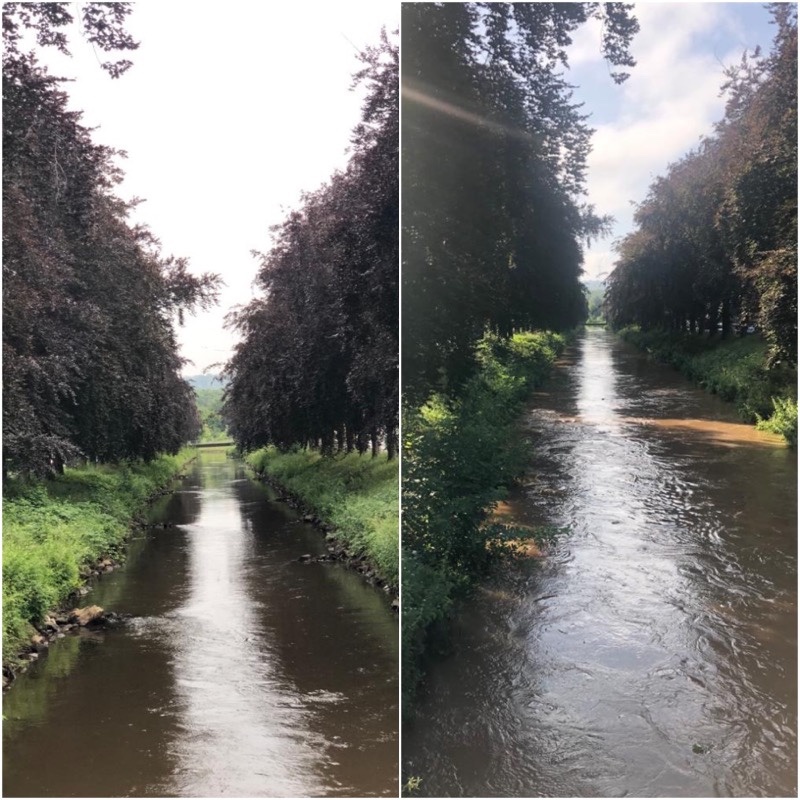 It’s been a little quiet here. I was pretty busy with work, and I have to admit, my mind has also been very preoccupied with the recent news.

I grew up in western Germany, in the area where major flooding occurred two weeks ago, and if one thing makes you question why tf you moved so damn far away, it is when stuff is happening at home and you are not there.
Let me get the – for me personally – most important part out of the way first: my family and my hometown are safe and okay. I was so relieved. Parts of my town have flooded before, so I was justifiably worried, but there was only minor flooding along the local river, Erft, although the same small river wreaked havoc in a town just 30 miles upstream. It’s a bit of a miracle.

The local Erft river in my hometown. (© Photo credit: my Mom)

Usual flow (left) and high flow two weeks ago (right). I know it doesn’t look so bad, and that’s because, in my town, it wasn’t. You can see actual destruction if you click the link below.

Many other parts of the German western states of North Rhine-Westphalia and Rhineland-Palatinate as well as parts of Belgium and the Netherlands were completely devastated when swollen rivers tore through towns and villages. The images are hard to look at. You wouldn’t expect widespread destruction like that in a European country. (I am not saying it’s okay anywhere, but to see this happen in some of the wealthiest and most technologically advanced countries, who have invested in flood forecasting and preparation prompted by previous inundations, is mind-boggling.)

The fact that this made national news in the US, when usually not much of the European news does (because we’re so busy with what’s going on in this country), you know it is huge.

But we really shouldn’t be surprised, or should we? Very unusual (and early!) heatwaves in the western United States, more frequent wildfires or intense freezing spells, and now the flooding in Europe. I’m sorry, but it does not seem like a coincidence. Climate scientists are convinced that these events are caused by climate change and even though exactly how all the different pieces might be connected, is still a subject of debate (and research), scientists have a hunch that global warming causes the slowing down of the jet stream, a fast-moving, high-altitude, current of air that circulates above the Earth, and therefore slows down weather systems. Because warmer air can hold more moisture (and global temperatures are rising), the combination of more moisture and a stalled storm system can then lead to extra-heavy rains over an area in a short amount of time. A high-pressure system moved very slowly over the western part of the United States a couple of weeks ago, hence the extreme heat, and a near-stationary low-pressure weather system brought record levels of rain to western Europe on Wednesday.

I am not a climate scientist, but for someone with a logical brain who works in the earth sciences, this all makes a lot of sense to me. Yes, there are nuances and many, many things that factor into this, but the trends are there. If you don’t see it, I can’t help you.

We really have to start addressing climate change for what it is: a climate crisis. It’s not too late to make appropriate changes, but the international community must pull together. We can’t keep pointing fingers at others and demand that they “fix” it. Everybody has to do their part. It’s hard as an individual person to know how to make an impact but we can all try to live more environmentally conscious lives and demand from our elected leaders to make the climate crisis a priority and address things on a global scale.