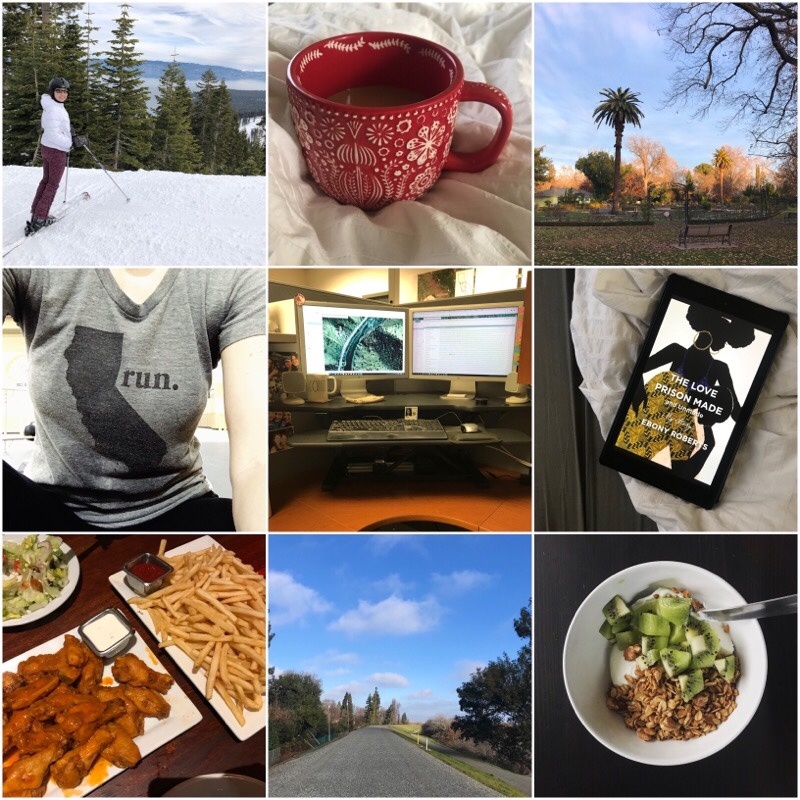 Can you believe that January is already over?  I feel like we just celebrated New Year’s Eve. Gah. I can’t be the only one. But here we are, it’s January, 31st and we’re doing the monthly recap. Let’s do this.

Three books! 2020 reading is off to a pretty good start. One of the books I read was “The love prison made and unmade” by Ebony Roberts, a memoir about the toll prison takes on people and their loved ones. Powerful and heart-breaking.

I roasted Japanese sweet potatoes for the first time (hint: they’re purple with white flesh) and they’re a beautiful mix between a sweet potato and a normal potato. You should give them a try. We also keep making this broccoli-chicken soup that I previously recommended.

I watched the Academy Awards (sort of) and the News (in small doses). I also watched a German movie (“Dancing Quietly”) and a German Christmas mini-series (“Holiday Secrets“) on Netflix at the beginning of the month.

I listened to a few episodes of  Pod Save America and also Michael Moore’s new podcast Rumble with Michael Moore.

I bought a new planner at the beginning of this month. And I used a gift card to buy two fitness and health books at Barnes and Noble. (I forgot how much fun actual book stores are. Note to self: go more often!) I also picked up a couple of dumbbell weights to use at home for strength workouts. Oh, and not to forget: tickets for Pearl Jam in the spring. Woot!

I ran 35 miles and cycled 51 miles. I mentioned this week that my goal is to run 600 miles this year, which would come out to 50 miles per month. I didn’t quite hit that number this month, but I am hoping to get some higher mileage months in the spring!

+ I am so thrilled I got a VersaDesk at work. A little back story: I used to have a height-adjustable standing desk in my old office which I never really used much.  I had to give it up when I moved into the cubicle, but of course, instantly regretted that I never took advantage of it when I had it. When our safety officer sent out an email at the beginning of the month that a couple of VersaDesks were available, I instantly jumped on it. It’s a little big for my cubicle, but I’ve been working standing up for a couple of hours every day and I love it.

+ As you already know, I went on a girls’ weekend retreat at Tahoe in January (yes, I am still planning to share a recap). I was nice to get away to the snow. It’s so strange because it never snows in Sacramento but you drive 1,5 hours east and we’re in a winter wonderland. I love it.

+ My friend Tanja and I set a goal to do two strength workouts at home during the week on the days when we don’t go to cycling or the gym. It’s great to have an accountability buddy to check in with and to keep each other motivated and on track!

+ I trimmed my own hair. After complaining about how expensive it is to get my ends trimmed (even at the barber shop), I took matters into my own hands last week and just chopped off 2 inches of my hair myself.

+ I finally made homemade granola again and used an adapted recipe with buckwheat. Have you ever tried it in granola? It has a nice crunch!

+ I mentioned in my Five Things Friday-post that one of our favorite restaurants has “50 Cent Wing Monday” and we didn’t only go once, but twice this month. How can you resist?

+ I’ve been trying to establish a new habit of taking more lunch break walks, especially on days when I don’t go to the gym or run outside. I work a desk job for 10+ hours a day, so it’s imperative that I get some extra steps in during the day!

+ Is anyone following the Impeachment Trial?  Of course, I am not watching the full day coverage, but what I see in the evenings is enough to want to pull my hair out. I cannot believe some of the arguments that are made! Is the president really above the law? How can a lawyer argue that if it’s in the interest of the country for the president to be re-elected, he can pretty much do anything? (I want to see that precedent stand when a Democrat is president again, which by the way, I think shouldn’t!) So yeah, as always, things are frustrating as hell on the political front.