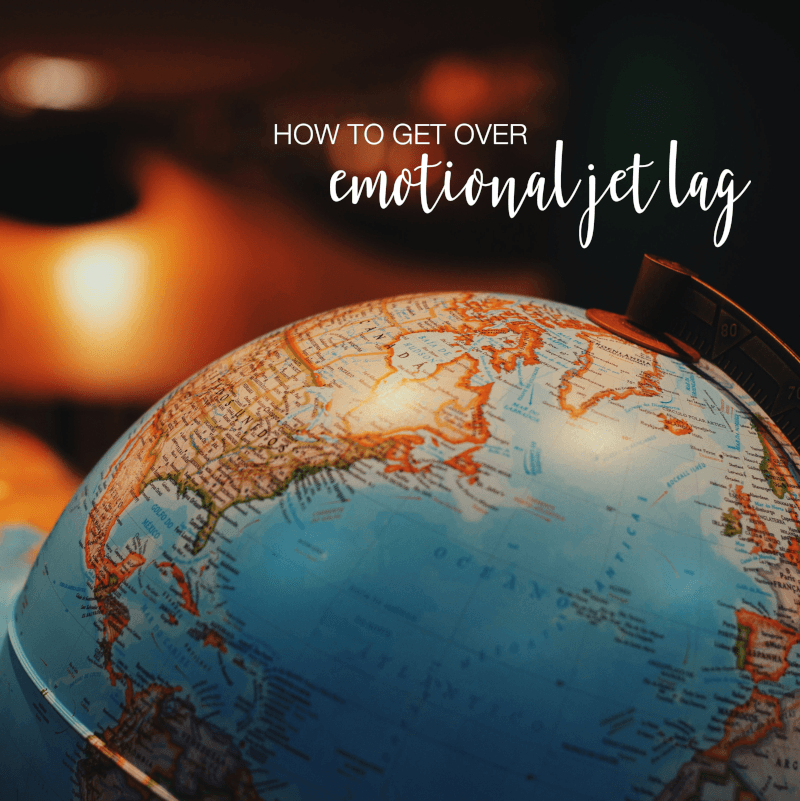 {Photo by Juliana Kozoski on Unsplash}

Before I dive into a slew of recaps about my trip home (which are already three weeks overdue, I am sorry!), I thought I’d share some thoughts on how I navigate the treacherous waters of emotional jet lag.

I don’t know if that is an official term, but I’ve been using it for a while because it so adequately describes the feeling when I return from a long anticipated visit with family and friends, only to return home knowing that I won’t see them again for quite some time.

Physical jet lag after an overseas trip is pretty common. We all know about time differences, struggling to stay awake, sleeping for 12 hours straight, waking up in the middle of the night to pee, yadda, yadda. I won’t talk about strategies to adjust to a new time zone here.

Instead, I want to focus on emotional jet lag, which for me feels like a “mini-depression”. I am putting this in quotation marks because I don’t want it to be confused with clinical depression, which is so much more serious and because I have no idea what that actually feels like (luckily), but in case of emotional jet lag, I use the word depression in the actual sense of the word, aka “being emotionally down” and overwhelmed.  I am lethargic, cranky, and just generally miserable (and justifiably so).

It’s also caused by that vacuum that you’re in when you travel large distance by plane, because it’s not like a road trip, where you can see the changing landscape and adapt slowly from one place to the next. No, it’s like one minute you get on the plane in Germany and – poof! – just like that you exit the plane and you’re back in the US.  It’s never easy to go from  60mph to literally ZERO in a matter of hours and I always find the transition from being there and “all of a sudden” being here again difficult. The sensation is bizarre and has, even if faded, not completely disappeared.

I am assuming that many people experience some sort of emotional jet lag when they travel internationally just because they just experienced new cultures, new foods, new people for a short, but intense period of time. So much to “process” and “digest”.

In my case, it is the abyss between being immersed in a place and culture that is so familiar to me (more familiar than anything really, but which has also become a little distant and foreign in a strange way ever since I moved away) and the everyday life that awaits me upon I return to my current home.

It feels like part of me is traveling back in time with some serious déjà vus thrown in, and then, all of a sudden, I am propelled forward again at lightning speed to the time and place where I live now.

The first few days back, I usually wonder: how did I end up here? Why do I live so far away from family and friends, or more accurately, what compelled me to make such a decision? And then I remember that, oh yeah, there was a guy and I kinda liked it here and it kinda just happened (gradually), without me really consciously making the decision that I want to live thousands of miles away from home. At the time, in my 20’s, it might have looked like bravery to some and it, for sure, felt like adventure to me, but you can’t really grasp what it actually means to move away unless you do it and live it for a while.

Don’t get me wrong, I don’t regret it, but if you are also someone who moved (far) away from home, you’ll know and understand that your heart will forever be split between two worlds.

So, what do I do when I come back from a trip overseas and I feel so emotionally hung over that everything feels a little off and I don’t want to deal with anything or anyone?

Here are five things that usually help me get over the emotional jet lag.

1) I allow myself to wallow in my feelings. I personally don’t believe it’s a good thing to suppress any emotions, regardless of how icky they make you feel. I usually give myself some time and spent a couple of days scrolling through the photos on my phone and reliving every single moment of the previous few weeks. It’s like by intentionally exposing myself  to the memories, I somehow purge the pain out of my system or something. I talk to my family on the phone and tell them how much I miss them and what a great time it was and how shitty I currently feel (because honestly, I know they feel the same way and why not be honest about it? Saying goodbye stinks.) But at the same time,

2) I try to get back into my routine. I mean, it’s probably something none of us can avoid anyway, as we have to go back to work and deal with the shenanigans of daily life, but it also helps me tremendously in finding my groove again. It puts me a bit on auto-pilot (which is just what I need), where I don’t have to think much or make decisions, but just go through the motions (while I sort out my  mental state).

3) I start working out again right away. Working out always, always lifts my mood and makes me feel better, no matter how shitty I feel. So obviously, it’s something I wanted to get back to right away. The other reason was that I had to catch up on my half marathon training ASAP, so that gave me an extra push to not delay getting back into my workout routine.

4) I put plans on the calendar that I can look forward to. We had a couple of outings planned upon my return (seeing friends and going to a concert), which gave me something to focus on. I must admit, it also helps that summer is just around the corner here and we can get outside and enjoy the parks and the beer gardens. When I am homesick, I try to remind myself of the things I love about California and all the things I’d love to do this summer.

5) I talk and write about my trip. While part of the reminiscing process makes me sad (because the trip is over), writing about and recapping my trip also puts a smile on my face and I will tell everybody that will listen about the wonderful time I had. Because regardless of how hard it is to go somewhere and then having to leave again, I wouldn’t want to miss the experience for anything, least of all to avoid the subsequent heartache.

Everbody knows that all good things must end, but aren’t we fortunate to have experienced them?

HOW LUCKY I AM TO HAVE SOMETHING
THAT MAKES SAYING GOODBYE SO HARD.

Now, three weeks later, I still think a lot – pretty much daily – about my trip, but I also slowly feel like I have mentally arrived back here in the States and that’s a good thing.

Have you experienced emotional jet lag? How do you deal with it?