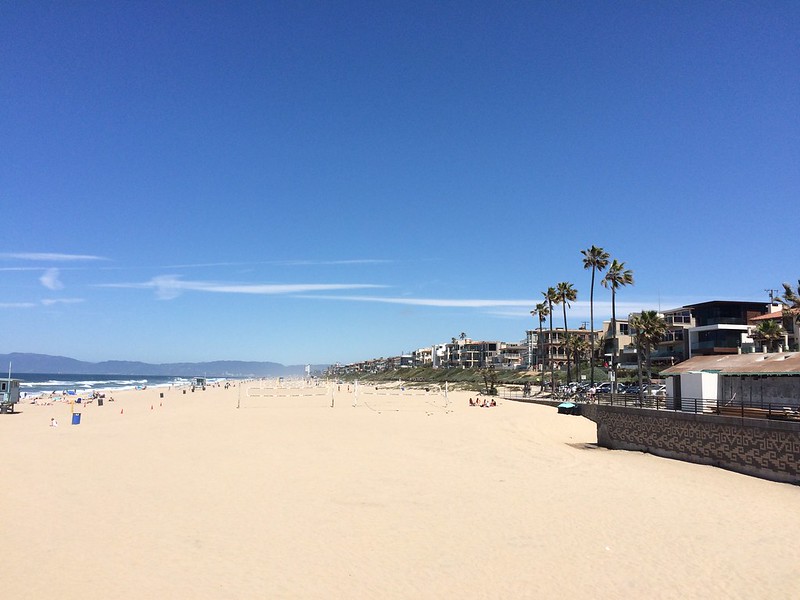 Two Saturdays ago, I flew down to SoCal for a quick weekend trip to see Caryn and her boyfriend Joe. They flew out from Washington, D.C. and I was so thrilled to see them again.

I got into Burbank on Saturday morning, picked up my rental car and made my way down to Manhattan Beach to (finally) meet up with my long-time blog friend Tanja for a few hours. I can’t believe it’s taken us this long to meet in person, because I go down to SoCal fairly regularly, but Tanja lives in Irvine and that is usually – with traffic – another 1-2 hours from where I am usually at and so it has never really worked out before, although we had talked about meeting up a gazillion times. Well, this time, we made it work out. We spent a few hours walking on the pier and along the beach just chatting away and it felt totally normal, as if we had done this countless times before. I always appreciate when the URL-to-IRL transition is that easy :) We even came across the Italian/German gelato store that Tanja had heard about before and she spontaneously treated me to two big scoops of stracciatella and honey-yogurt gelato. Thanks again, friend! I really hope we can do this again sometime and then ice-cream will be on me! 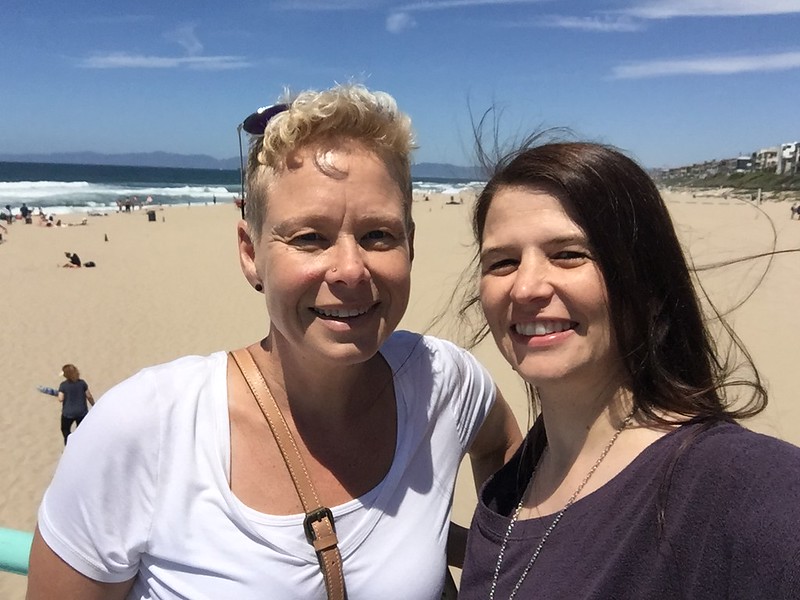 And here’s proof that we finally met up. (Please disregard my crazy hair. It was so windy!)

Around 3 p.m. I headed over to LAX to pick up Caryn and Joe.  We hadn’t seen each other in 1,5 years – time flies! – but it felt like I had just seen her yesterday!

We had an AirBnB reservation across from the Santa Monica Pier, dropped off our luggage and car there and then walked over to the pier. It was sunny, but (still) crazy windy. 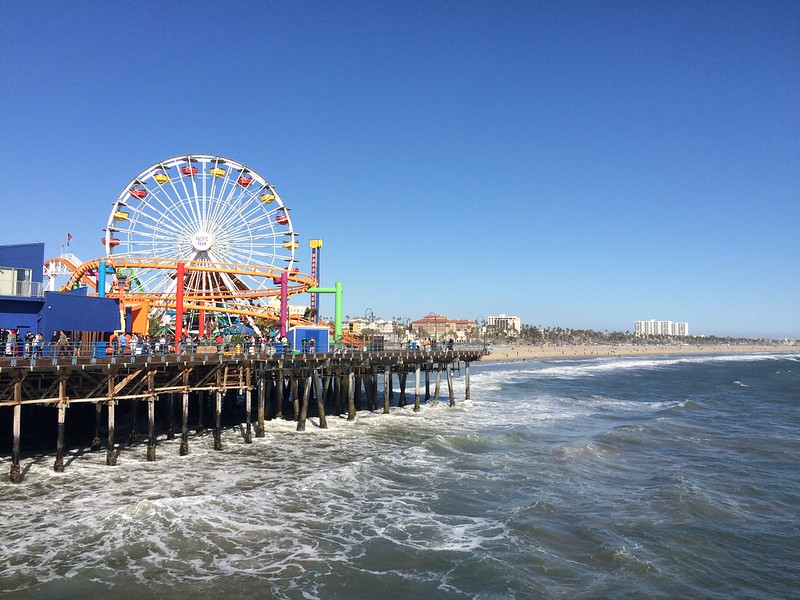 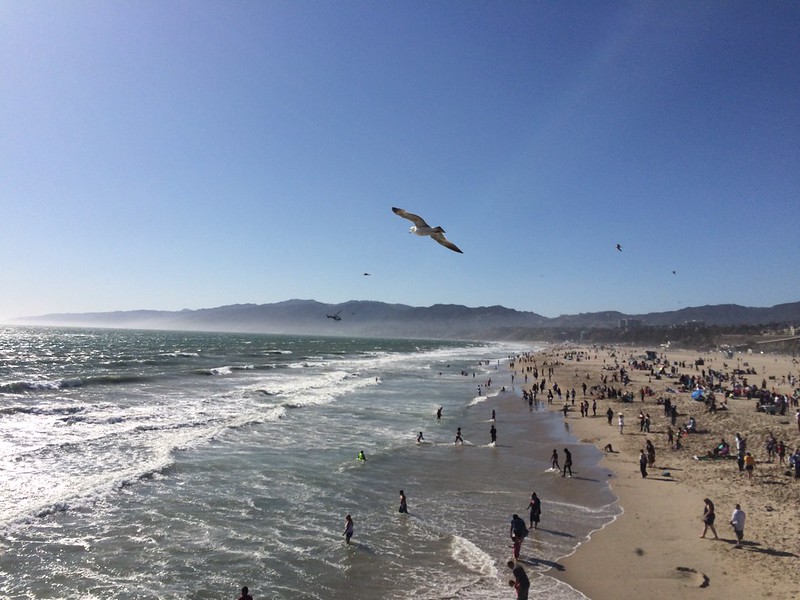 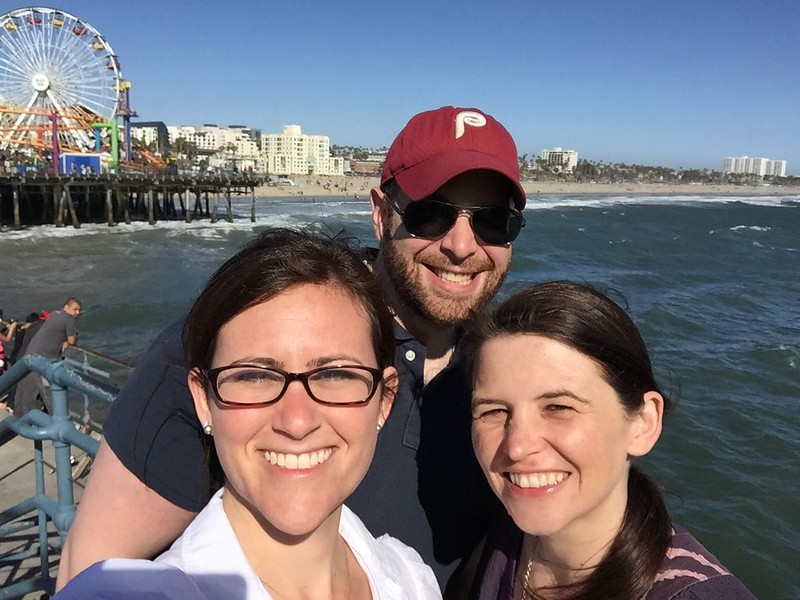 We walked around on the pier, then walked over to 3rd Street Promenade where we had dinner at Lotería Grill, a Mexican Cantina, including a pitcher of Margarita and chips and guac. Naturally.

Since Caryn and Joe were still on East Coast time, we headed back to the AirBnB, got comfortable and watched one of the strangest movies I’ve ever seen (“Election”). Haha.

The next morning, we had breakfast at Jinky’s and then took a drive up PCH. First, we did a short hike on Zuma Canyon Trail… 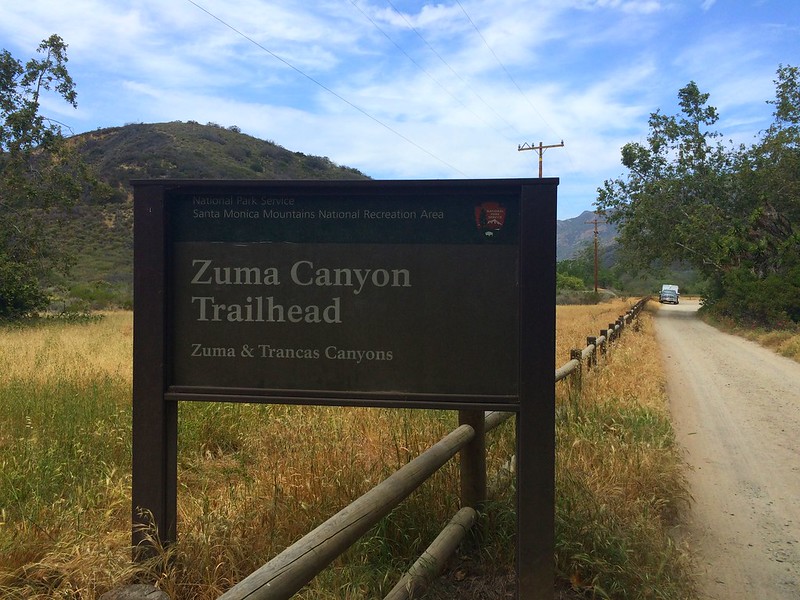 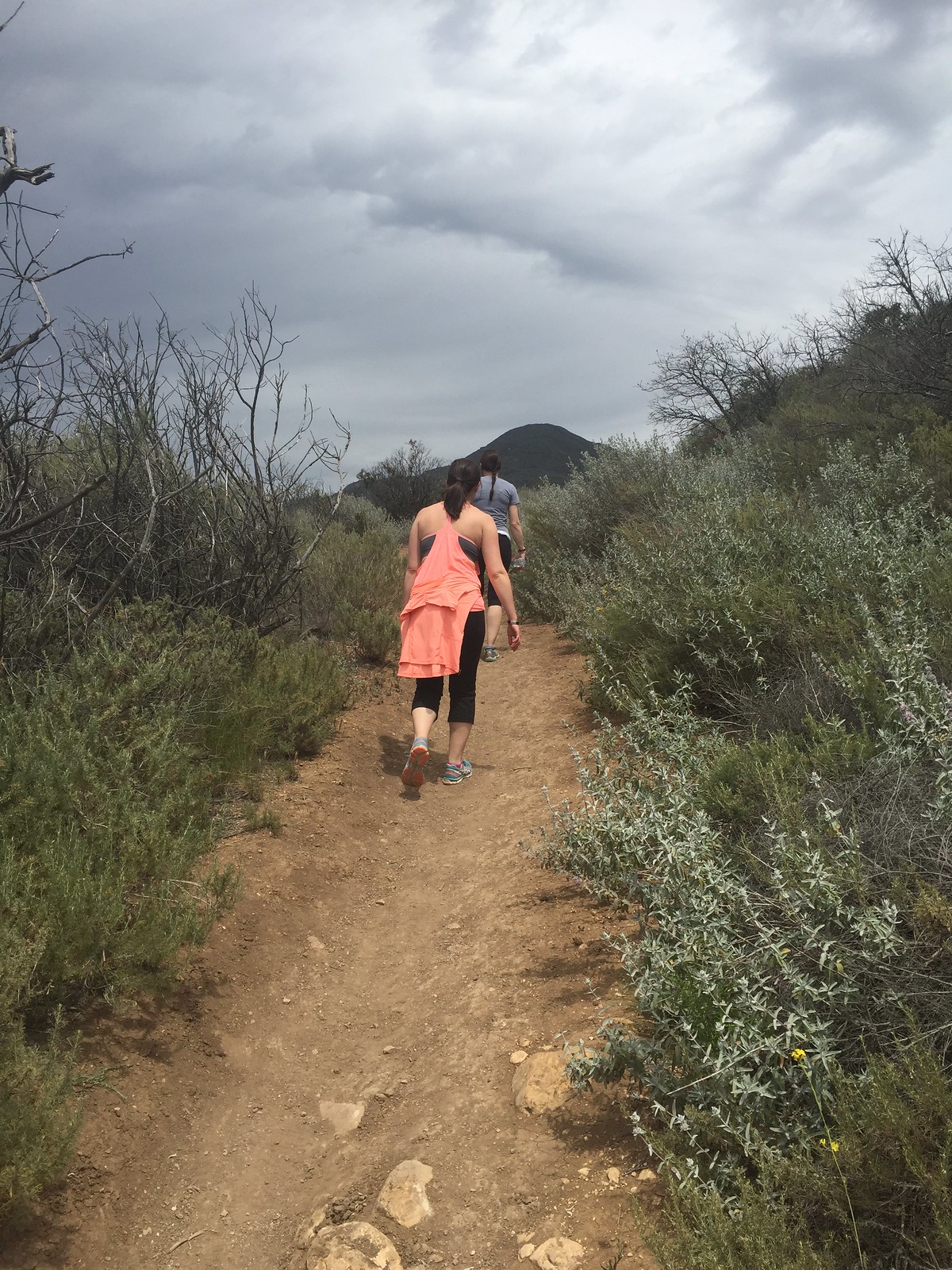 … until we realized that this is not close enough to the water. So we turned around and went to Zuma Beach. 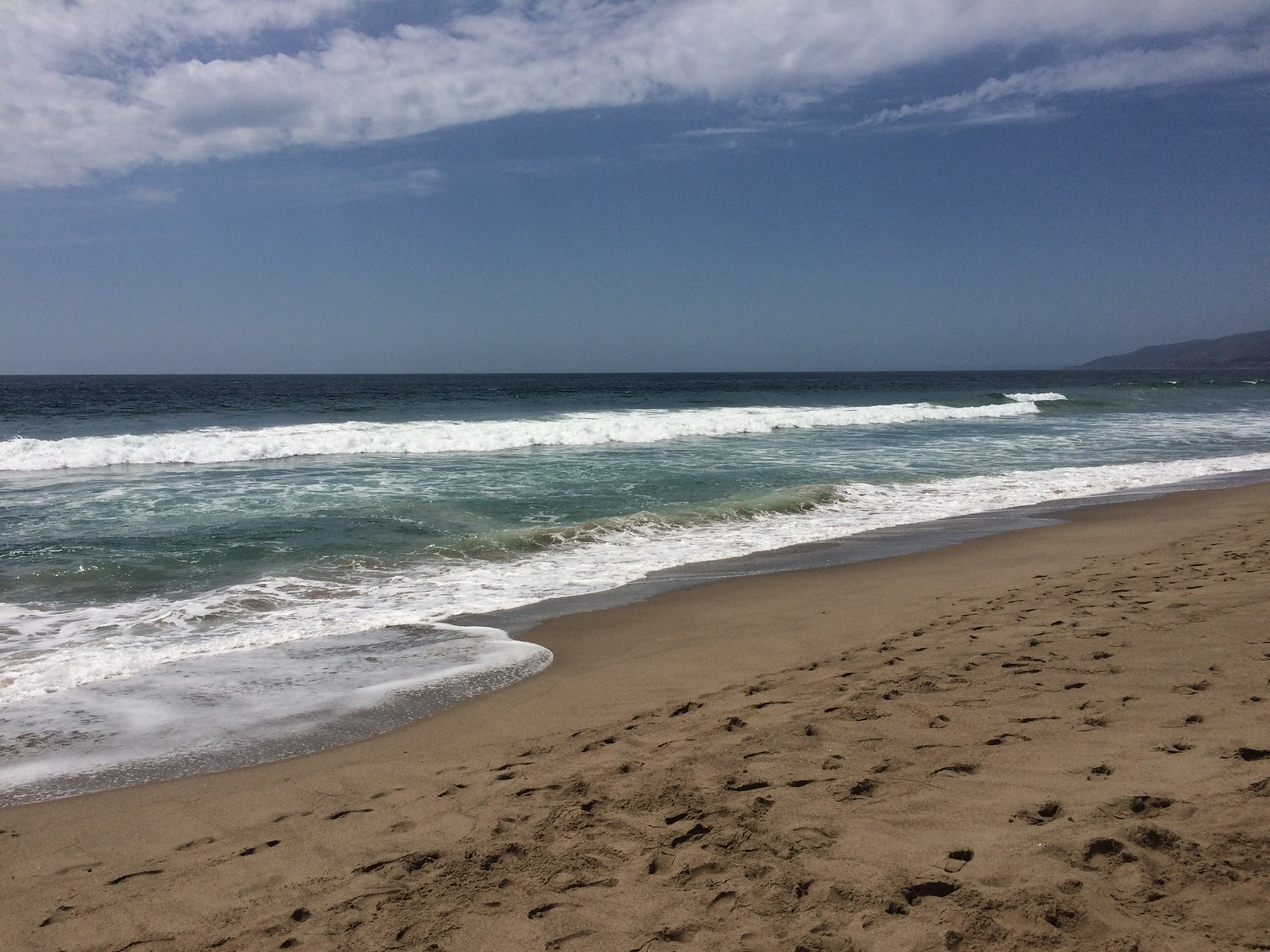 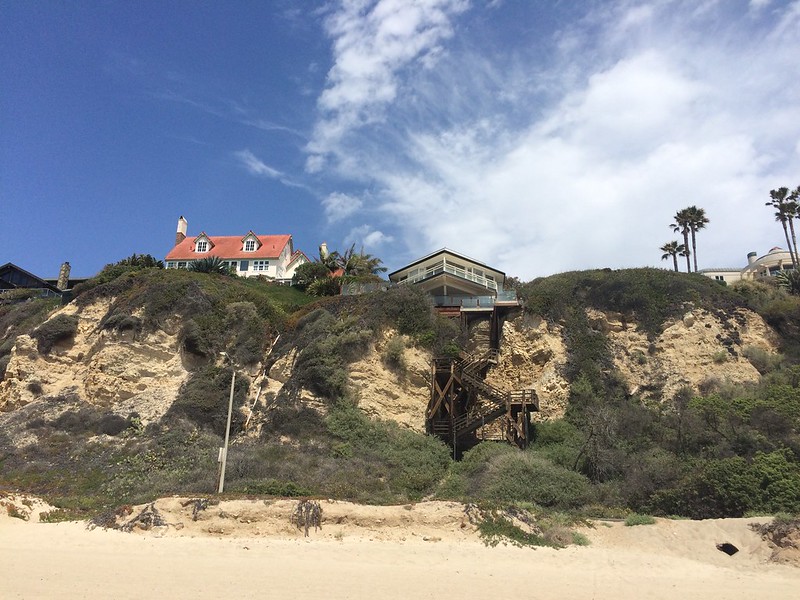 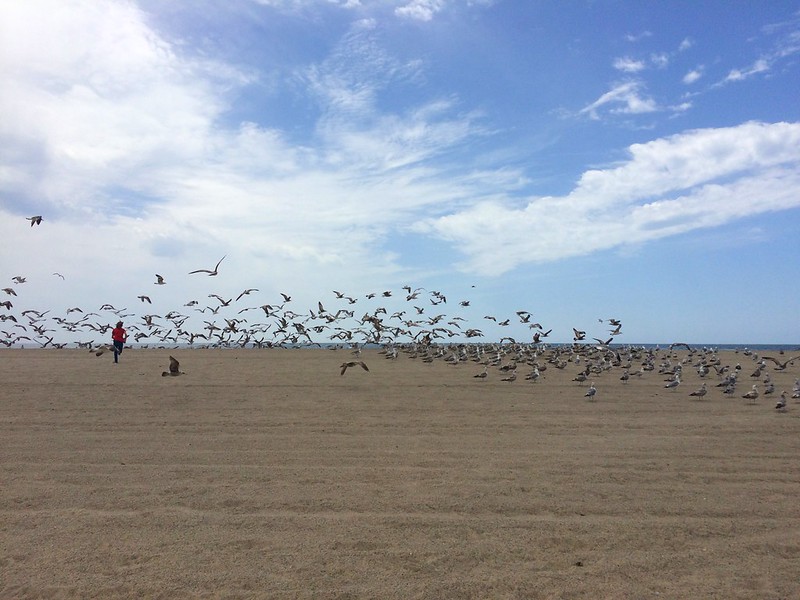 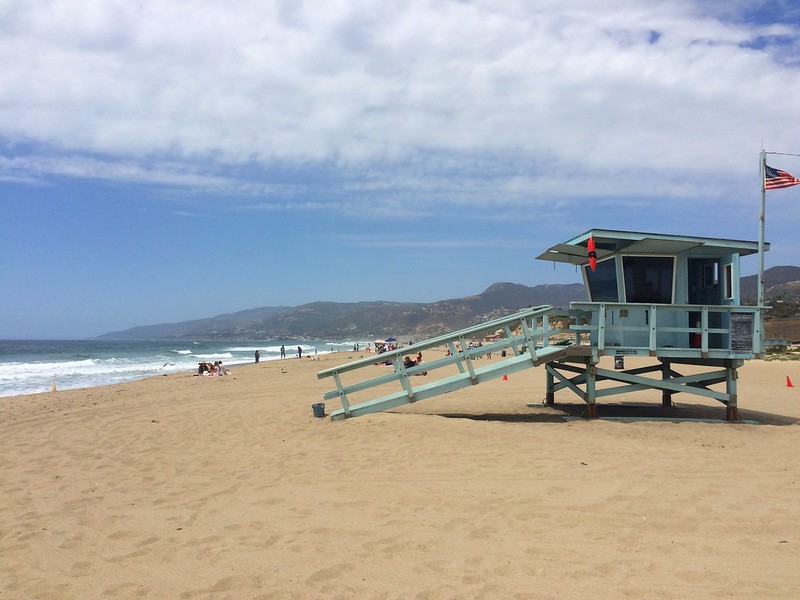 We walked around there for a while and then hiked the Point Dume Trail on the coastal headlands. The view was gorgeous. I mean, look at this! 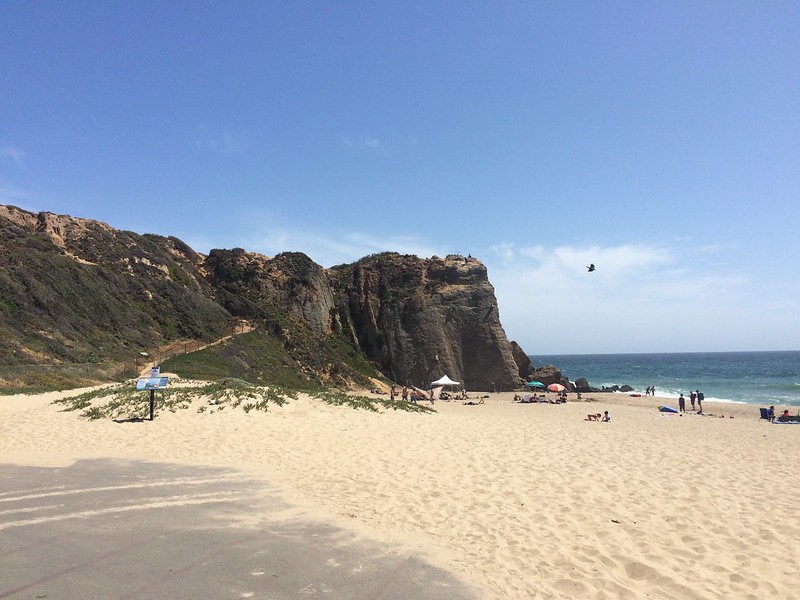 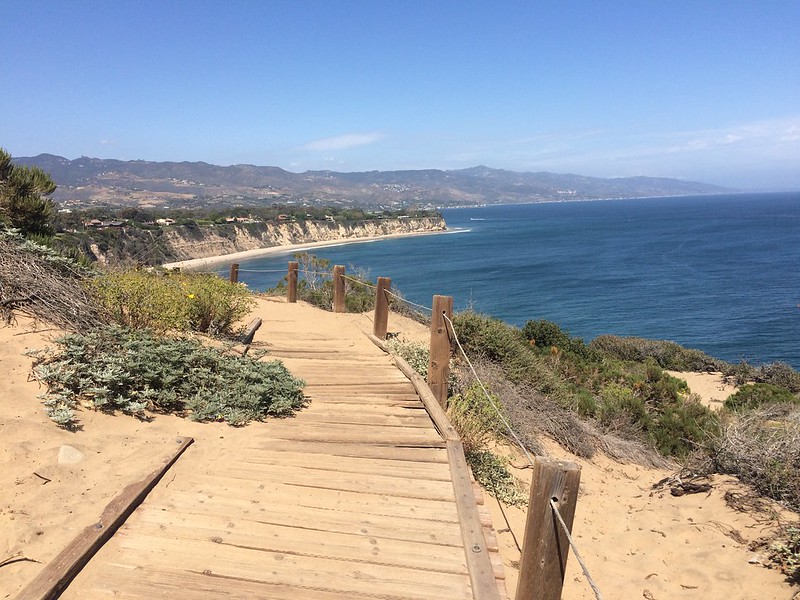 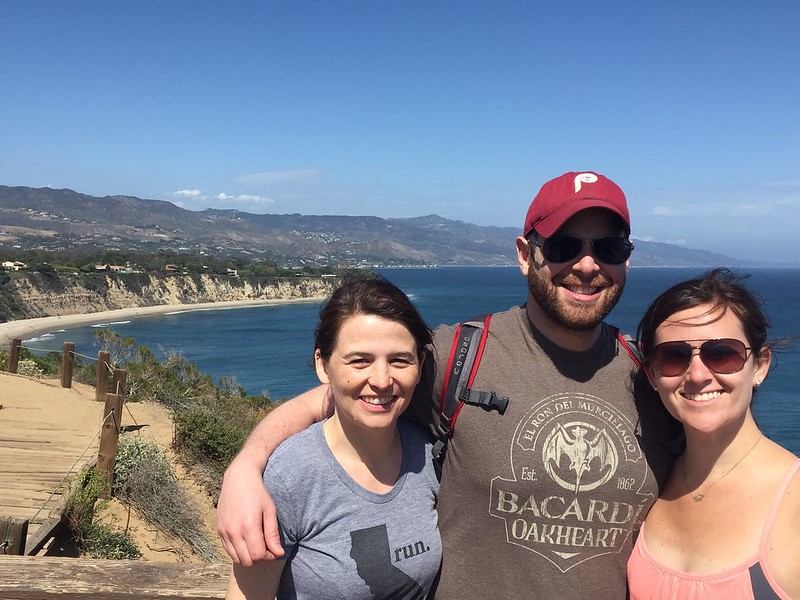 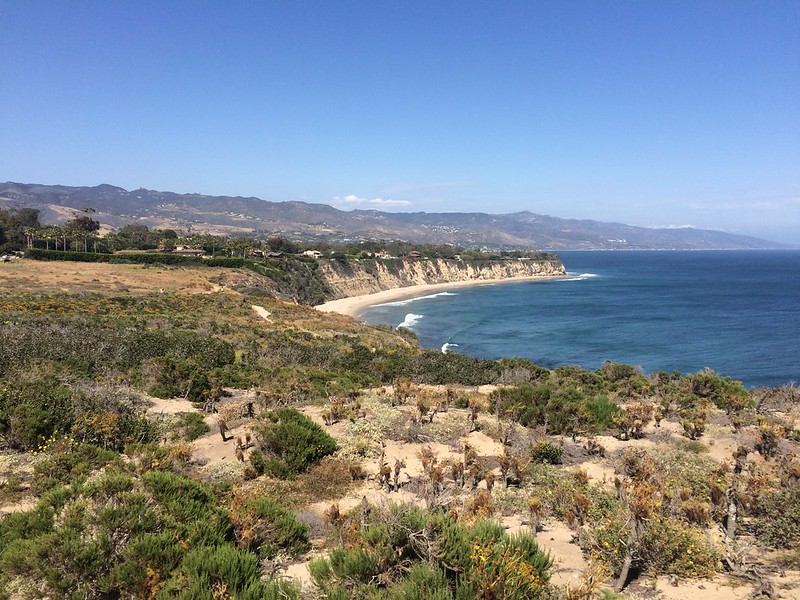 We even saw some dolphins and seals in the water (and we smelled the seals, too. Ha!). It’s hard to see in the picture, but there were many seals just hanging out on the rocks down there. 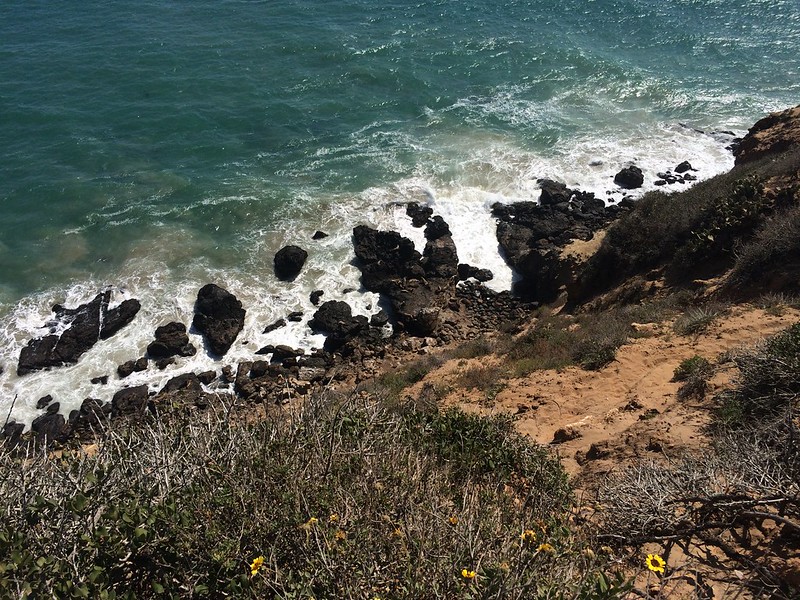 Then I took them to “Neptune’s Net” for a late lunch. I mean, you have to see Neptune’s Net when you’re in the Malibu area, don’t you agree? It’s rather famous after all (it has been in multiple TV and film productions, like “Point Break” and “The Fast and the Furious”. (What? You haven’t been there? Put it on your bucket list!). 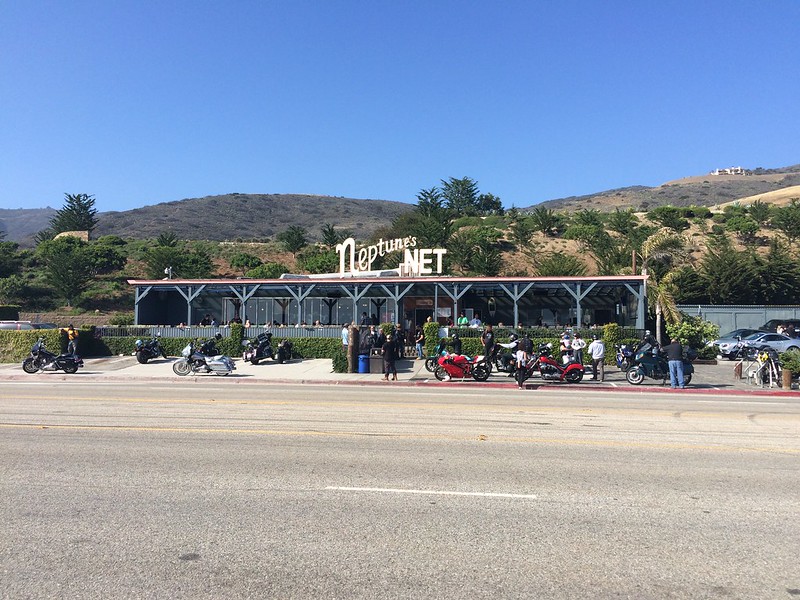 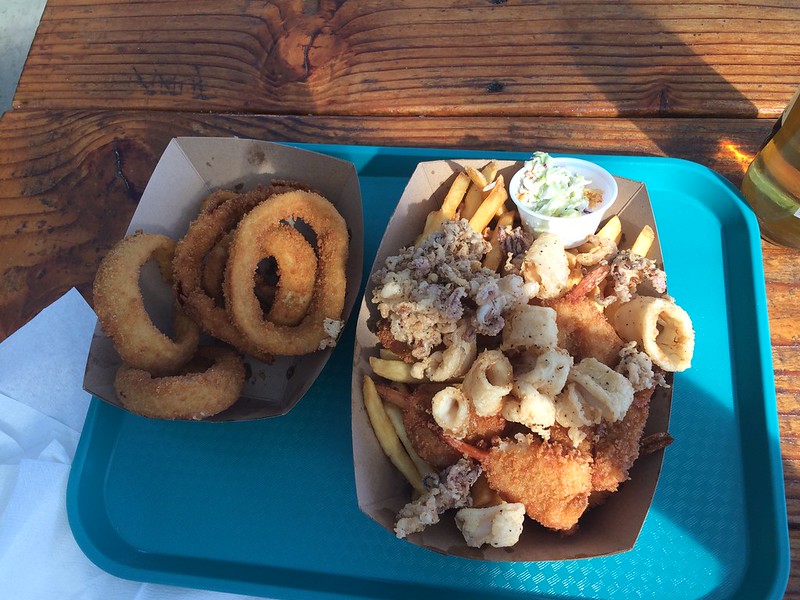 Afterwards we drove back to Venice Beach and showed Joe the craziness that is the Venice Beach Boardwalk. It’s like Vegas – you have to see it at least once.

We headed back to the AirBnB to freshen up and then had dinner reservations at “True Food Kitchen”, which was conveniently just two blocks away. I had a grass-fed bison burger with caramelized onions, arugula and mushrooms with a side of sweet potato hash and kale salad. It did not disappoint.

Of course, we couldn’t end this marvelous day without getting “Yogurtland” for dessert.
Monday morning, I was awake really early (probably because my body is used to get up before 6 a.m. on a weekday) and so I went for my (scheduled) 11k HM-training run at the Santa Monica Beach. I mean, how can you not take advantage and run at the beach when it’s right in front of you?  If you recall, last time when I met up with Caryn in Santa Monica, we went on a run on the beach together as Caryn was getting ready for the Chicago Half Marathon. I quit after 3 miles and said that I don’t think I could ever run more than 3 miles.

Hahaha. I guess I was wrong.

The run was awesome. Perfect weather (still cool, but sunny), music in my ear and the most beautiful ocean backdrop one could ask for. 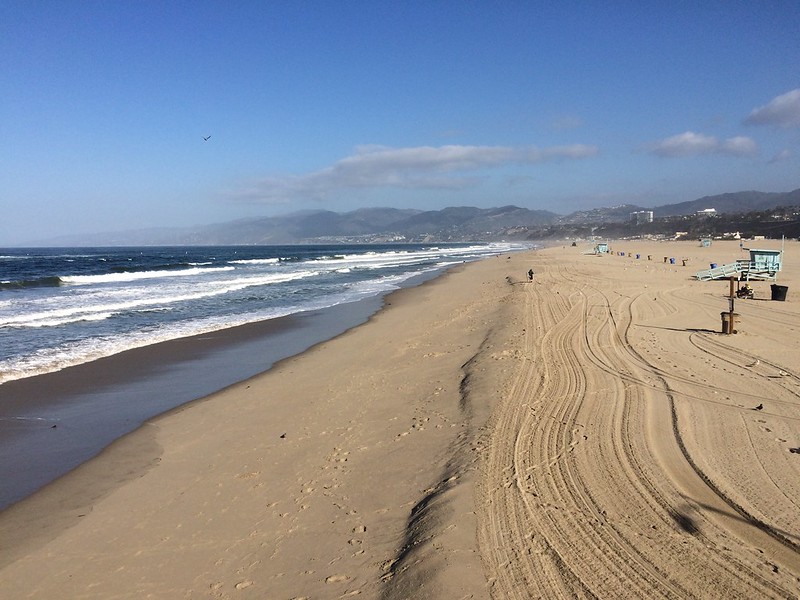 We checked out of the AirBnB around 9:30 a.m. and went to breakfast at “Seasalt Country Kitchen” on Santa Monica Blvd. I had a delicious breakfast bowl with greek yogurt, granola and fresh fruit. Yum. Caryn’s omelette with asparagus and mushrooms looked really good, too. 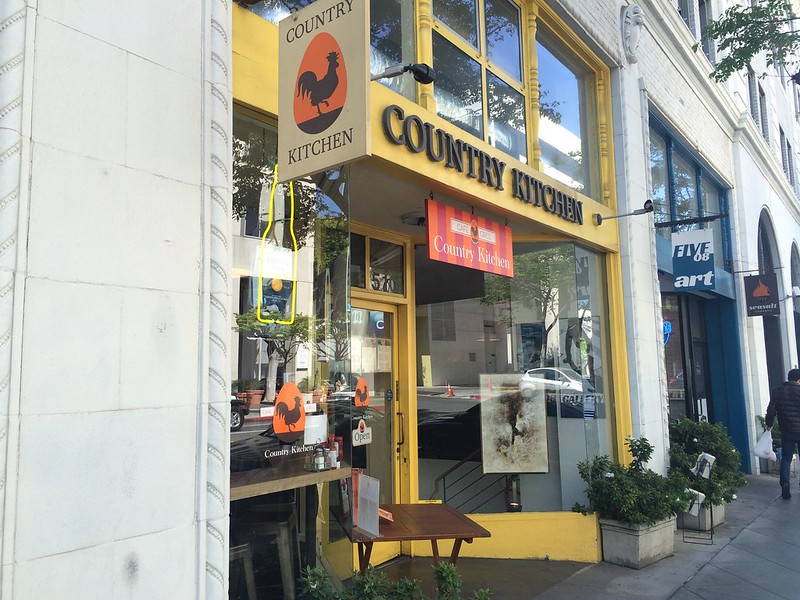 After breakfast, we perused a little spiritual books store next door before I dropped them off at their rental car office a few blocks down and then it was time to say goodbye again. The weekend went by way too fast (as always), but it was really, really fun to hang out with Caryn and Joe and I hope we can do that again sometime.

My flight back to Sacramento wasn’t until 6:30 p.m., so I had some time to kill and drove to Westwood (where we used to live), drove by our old apartment complex (still standing and still looks the same) and walked around Westwood Village for a couple of hours. I still had a gift certificate for a paper store in Westwood from years ago, so I thought I’d drop in and see if I can get me some pretty paper. Turns out, the store is closed on Mondays of all days! Argh, I can’t believe I didn’t check beforehand…. but what kind of store is closed on Mondays?!

Oh well, I guess I’ll have to come back another time.