I am recapping the wonderful times that I had with my family here in the States this summer. See all related posts under the category:  summer tales.

Today (7/8) we left Page and headed to Las Vegas. Weather in the area is really strange, because although it was quite warm, we hit a couple of localized thunderstorms driving west. 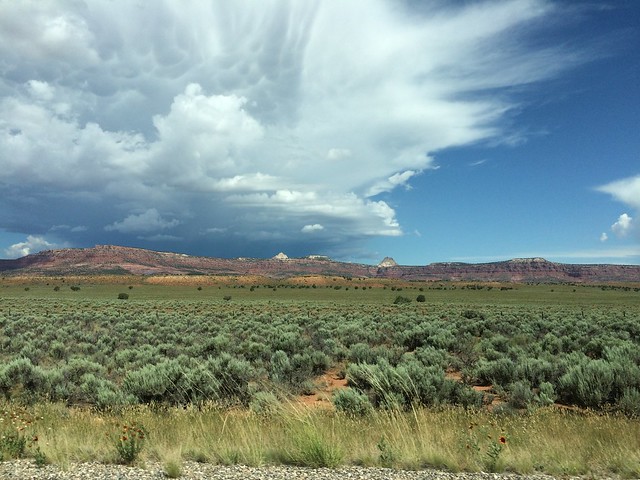 We arrived at the “Valley of Fire” around 3 p.m. The Valley of Fire was named for the magnificent red sandstone formations that were formed from great shifting sand dunes during the age of the dinosaurs more than 150 million years ago (Mesozoic Era).  These sandstone formations can appear to be on fire when reflecting the sun’s rays and it was definitely a beautiful view!

We decided it was time to stop somewhere for a late lunch. We looked for a picnic area close to the “Seven Sisters”, a group of 7 tall, red, eroded boulders surround by the sandy desert. We ended up sitting right between two big boulders which turned out to be a wind aisle and we had to hold on to our paper plates and drinks. It was quite entertaining actually and we called this “adventure-picnicking” :) 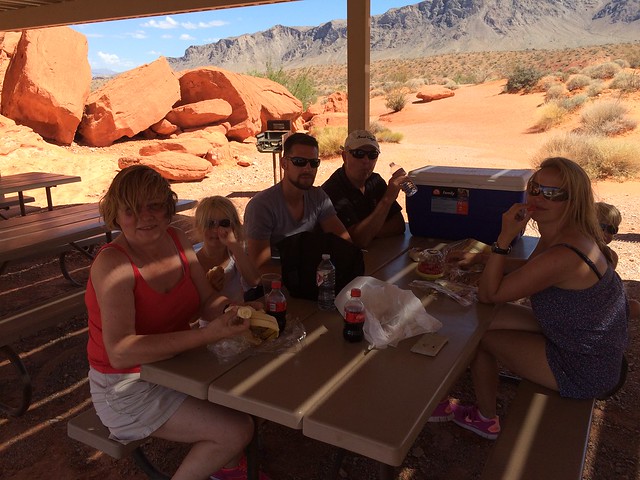 Numerous “blow holes” forecast the eventual destruction of the towers in the future. For now, these holes were fun for taking some photos. 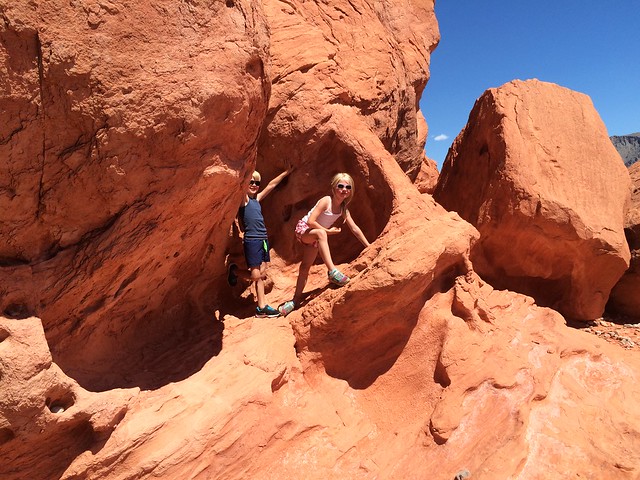 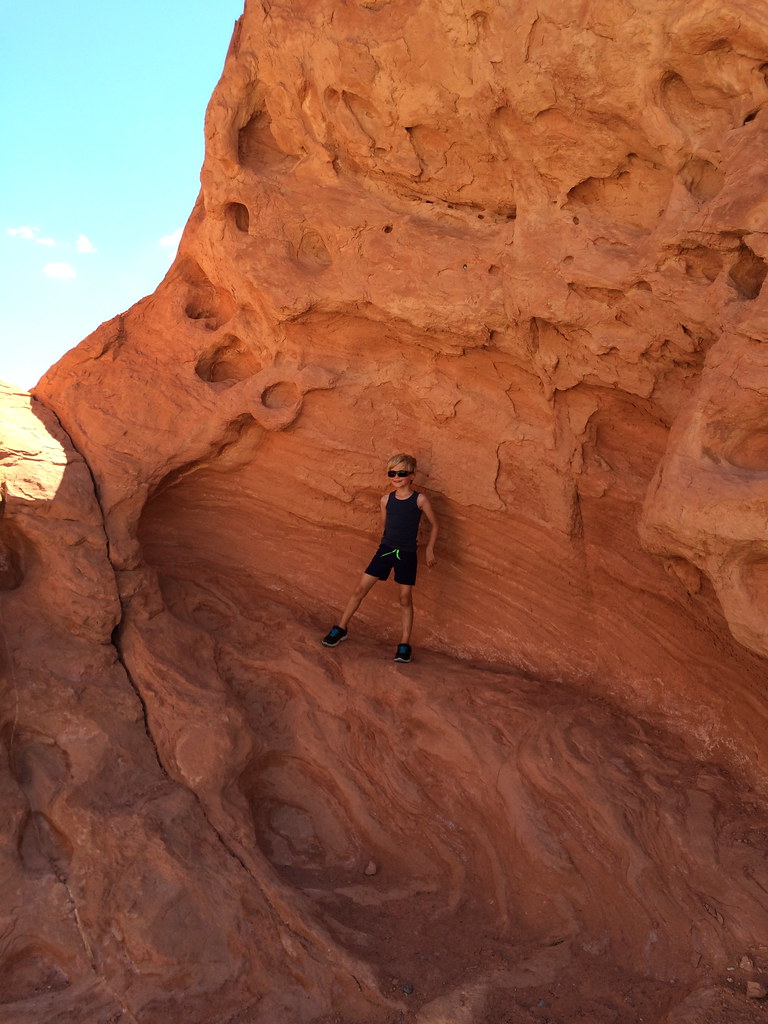 We stopped at the Visitor’s Center and then to the ‘White Domes’, where we embarked on the 1-mile White Dome trail hike. We even passed by a historical movie site! The White Domes area was the location for the 1966 movie The Professionals, starring Burt Lancaster and Claudia Cardinale. The movie was also responsible for the development of the road and access to the area and the remains of the site include a small portion of the wall of the hacienda. 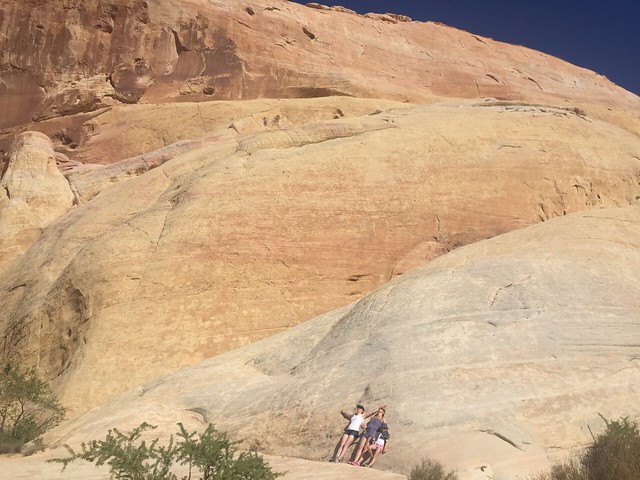 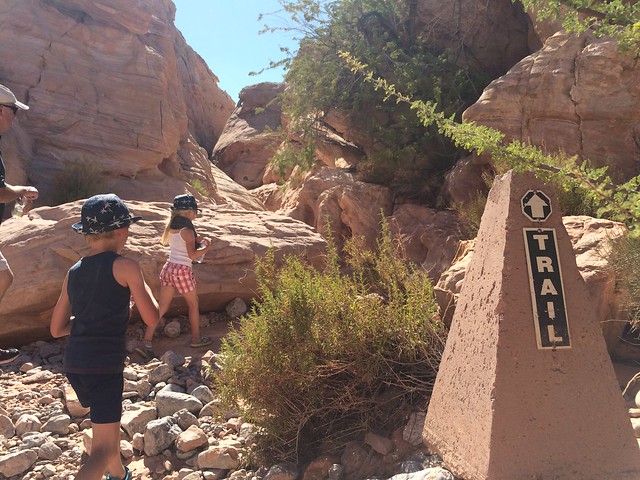 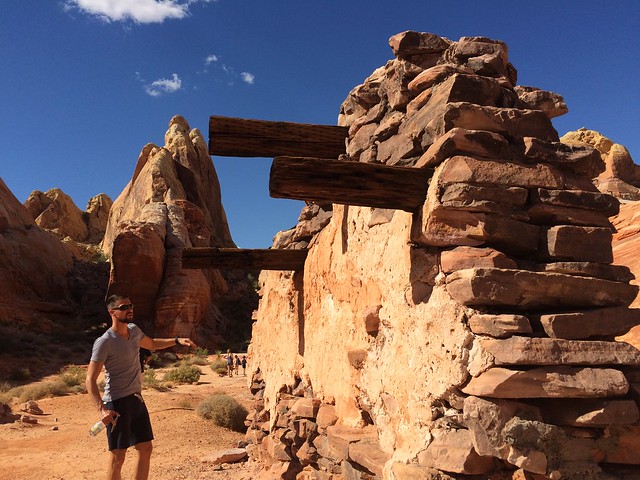 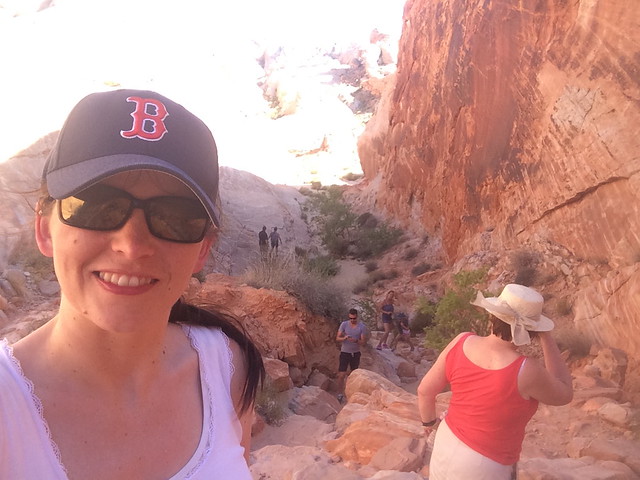 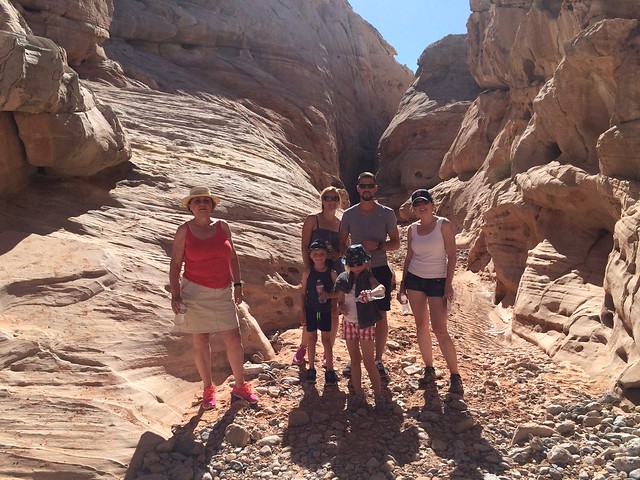 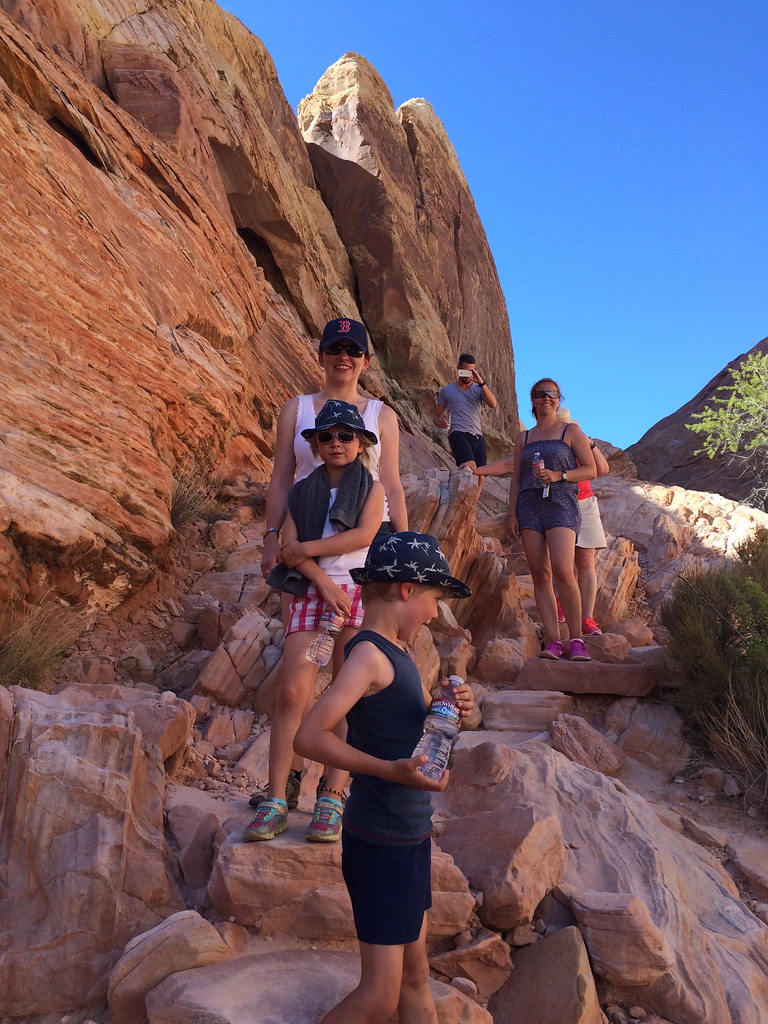 Unfortunately, we couldn’t finish the loop through the slot canyon, because there was standing water in the canyon and we had to turn around. It was still a very impressive, short hike!

Sadly, time was getting away from us once again and we had to abandon our plan to hike to the (fairly new) Fire wave (which is supposedly a smaller version of “The Wave” in Arizona.

We left the park around 5 p.m. and made our way to Las Vegas. We checked into our hotel, the Paris Las Vegas Hotel, refreshed ourselves and then headed out to dinner. A quick consultation of the Internet and we had reserved a table at the Double Barrel Roadhouse, a bar & grill with an open patio right on the Strip!

We ordered nachos, spare ribs,  and steaks and enjoyed the people-watching. On our way back, we enjoyed the water fountains at the Bellagio and then headed back to the hotel. 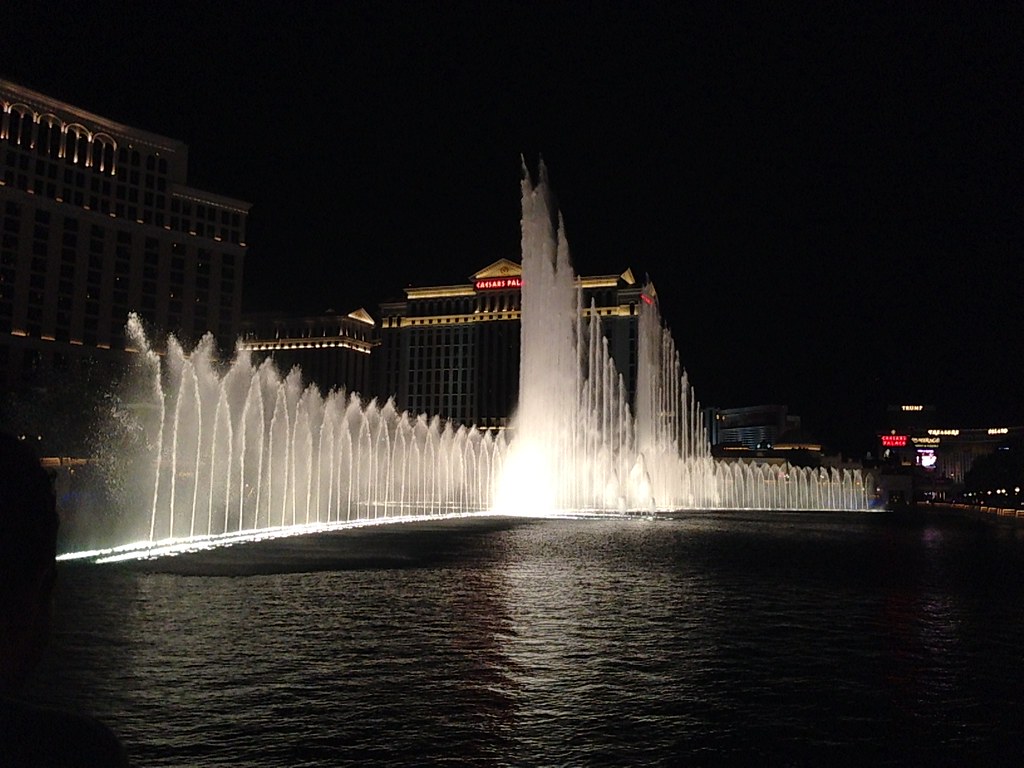 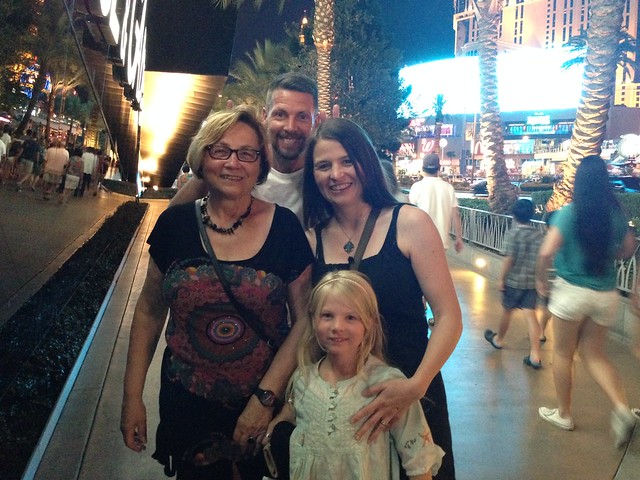 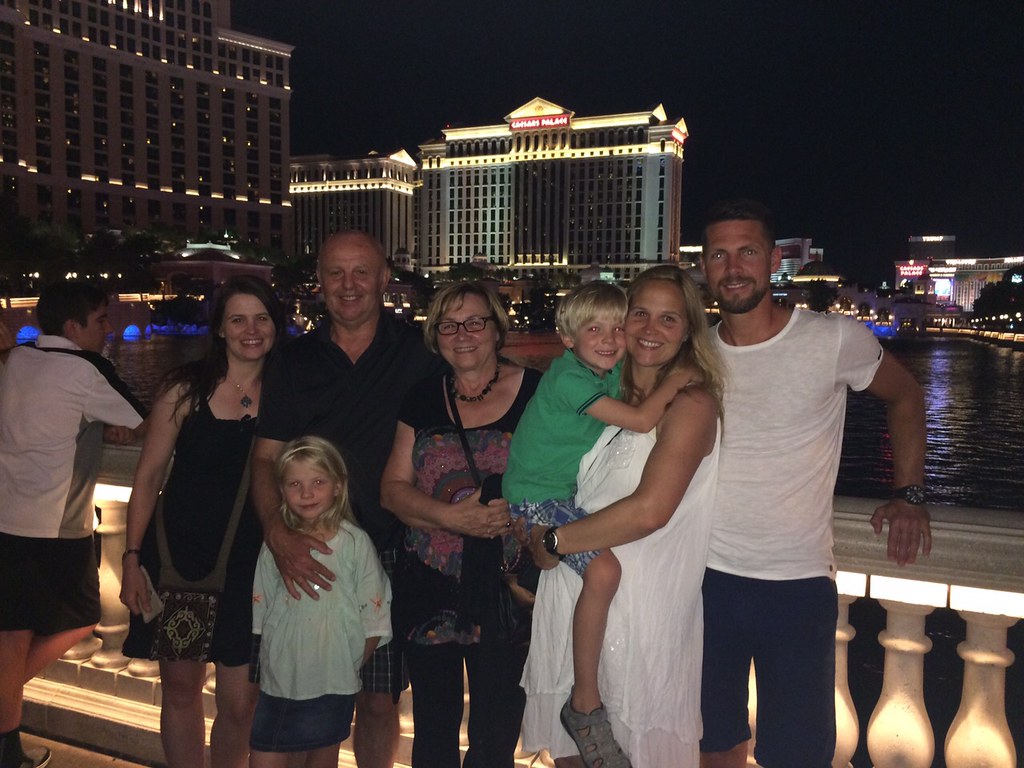 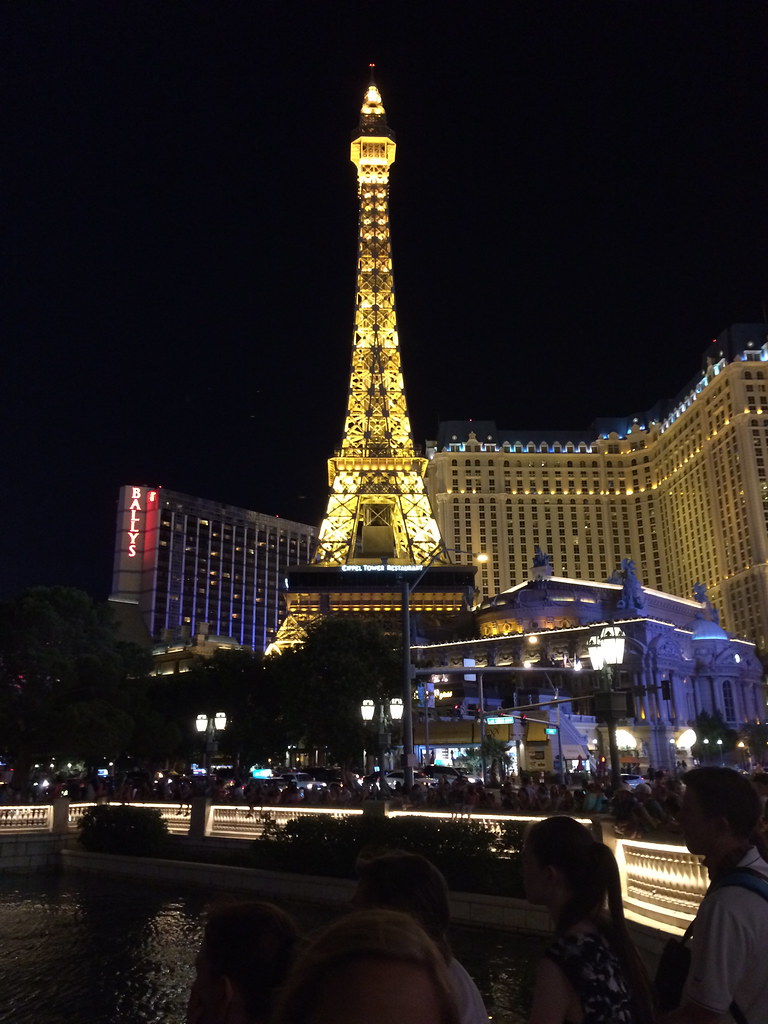 The kids needed to go to bed! My Mom volunteered to stay with the kids and the rest of us headed to “Napoleon’s Bar” to enjoy a drink and listen to the “Dualing Piano Players”. It was fun!