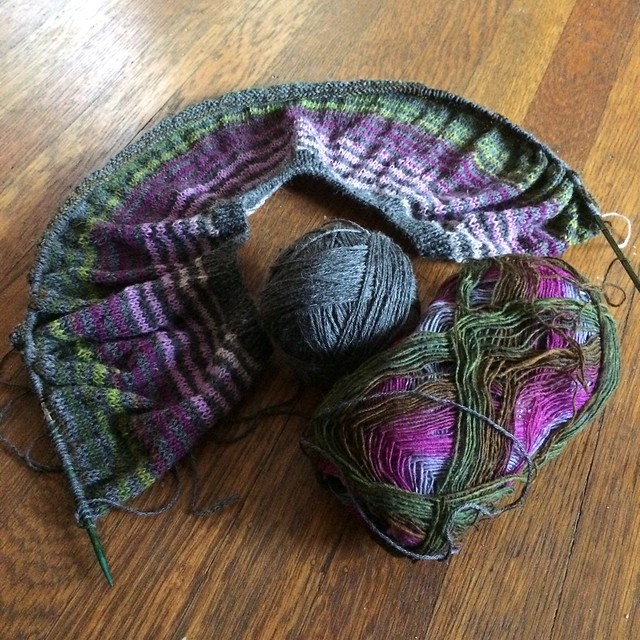 …, as you might have noticed, a little quiet here right now. 2015 has not been off to the greatest start, like not at all and I just hope there won’t be any more bad news.

… saddened by and worried about some news that I received from a very dear friend last week. I am a little scared and also feel so helpless that I can’t physically be there for her. She could for sure use some positive vibes and finger crossing. Thanks!

… so in love with my Chemex coffee maker. I feel like it’s the equivalent to the ritual of hand-brewing loose tea and it totally speaks to my ritual-loving personality. Coffee just tastes that much better, just like it tastes better from a pretty cup (and that is totally scientifically provable, right?).

… excited to see my cardigan grow. I’ve never knit a cardigan before and am really curious how it’s going to turn out.

… tired of not being able to make any plans because my employment situation has still not been resolved. This limbo sh*t has seriously been going on for way too long. You know, I am not really worried anymore about actually losing my income at this point, but I definitely can understand what it means to feel constantly stressed out, because you can’t really make any future decisions / plans / investments. People strive on stability, at least long-term. You really can’t tell me otherwise. I could get really political on you right now, which I won’t, but let’s just say, this is a bunch of BS.

… dealing with a bacterial stomach infection which I probably have had for well over a year now and none of the doctors that I had previously seen for stomach/heartburn symptoms felt the need to test me for the bacteria. I am so mad. I know there is a lot more freedom here when it comes to medical tests/treatments and the doctor won’t push anything on you, but how should I ask for a test when I am not even aware what my symptoms could potentially be? I mean, that’s why I am going to the doctor, so (s)he can tell me what is wrong with me.

… waiting for all my other little ailments to go away which bothered me since the beginning of this year (pinched nerve in my back, tetanus shot side effects, headaches)  and get into an exercise and yoga routine again. I feel like a lazy slug right now.

… a little bit obsessed with my new Inkwell Press liveWELL planner and the helpful tutorials, freebie downloads and such. Such cool stuff! I think I might have to write a separate post about this. I was a very happy Erin Condren Life Planner user for three years, but I wanted to try something new for 2015.

… currently reading Love walked in by Marisa de los Santos. It’s the second book of the Postal BookClub that I am participating in this year.

… probably the only person who couldn’t care less about the Super Bowl on Sunday. Maybe I’ll pop in for some of the commercials. Maybe.